Your guide to today’s SGB election 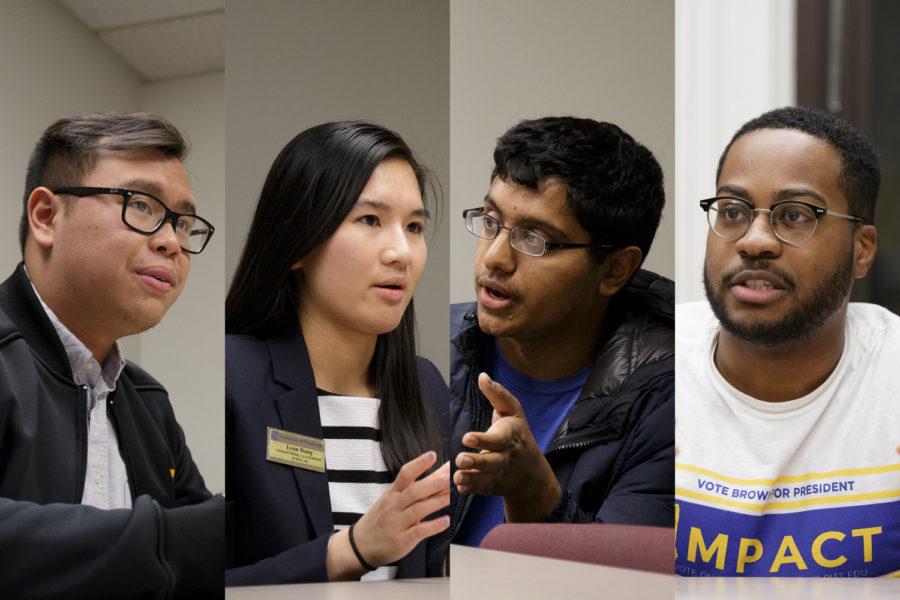 That’s right. Today, Pitt undergraduate students vote for next year’s Student Government Board. Polls are open from 8 a.m. to 8 p.m. on elections.pitt.edu, and winners will be announced later tonight. The eight board candidates who win the most votes will be elected to the board and serve under the winning presidential candidate for the 2019-20 school year.

As an editorial board, The Pitt News chose not to endorse specific candidates for any elections this year, including for SGB — read more about our reasons why in a November editorial. But we still sat down with each slate to hear about their plans, policies and priorities.

Albert Tanjaya, one of two candidates for the president’s spot, joins Eric Macadangdang, Victoria Tappan and Anais Peterson on the Frontier slate.

Tanjaya wants to “rebrand” SGB, bringing it closer to the students, he said. He talked about holding some of SGB’s regular office hours in public spaces, keeping communication open with The Pitt News and holding “fireside chats” on WPTS to talk about what the board is doing.

“Introducing ourselves to freshmen and sophomores, saying, ‘Hey, here’s what we do, we’re always up on the eighth floor,’ and just being that personable person you want your representative to be,” Tanjaya said, describing his plan for SGB outreach.

Macadangdang, the current chair of SGB’s Wellness Committee, said student wellness, physical and mental, would stay his priority as a board member. He wants to address complaints students have had about the Counseling Center, working with the new director, Jay Darr, to improve cultural diversity issues and long wait times at the center. He said he also hopes to make menstrual products available around campus for free.

Neither Tappan nor Peterson have SGB experience, but Tappan, who has worked with homeless youth, said she wants to address the needs of lower-income students by creating a lower-cost meal plan.

Tappan, a member of the Tri Sigma sorority, said she also wants the board to work to improve Greek life’s image on campus.

Peterson said she wants to create a comment period that would let members of the community voice opinions at public Board of Trustees meetings, and improve gender-neutral bathrooms for LGBTQ+ students on campus.

Peterson has a history of activism and is a member of the Fossil Free Pitt Coalition, work she said she hopes to further as a board member.

Brown, too, is focused on making SGB more available and accessible to students, specifically through “Bonding with the Board” events that would give students a more open setting to chat with the board.

“A lot of students are put in a predicament where they’re in a setting that they shouldn’t be and they end up in trouble with the University, and that could stop them from going on study abroad or participating in other areas of student life,” he said.

Unger said she hopes to continue work she began this year as the chair of SGB’s Facilities, Technology and Transportation Committee to advance campus safety. She wants to combine the two campus safety alert systems — the Emergency Notification System and Crime Alerts — for efficiency reasons. Unger also has a plan to create a free and reduced meal plan for food-insecure students.

Agarwal, who currently serves on the Allocations Committee, wants to create a mentorship program to help new students adapt to Pitt and feel connected to the campus.

“It’s really easy to feel lost in the midst of 19,000 other kids,” Agarwal said. “I want to make our campus feel a bit more intimate by connecting underclassmen and upperclassmen through formalized peer mentorship programs.”

Her other initiatives include the creation of a central calendar where clubs could post events, the implementation of compost bins around campus and a collaboration with the Career Center that would connect students to alumni in their academic fields.

Glaser, another outsider, has a big project in mind — the creation of a tenants’ union through the University that would eventually lower rent for students. The idea was born through Glaser’s research as an honors scholar at the Elsie Hillman Civic Forum, where he realized Oakland rents were disproportionately high.

Glaser acknowledged that the creation of a union would be a multi-year endeavor, but said he’s running to “expose the problem” and lay groundwork for a solution.

The three candidates of 19Forward are proud that they don’t resemble the average SGB slate. Lynn Dang and Sean Steinle, first-year students who joined SGB during their first semester, have joined outsider sophomore Cedric Humphrey on a campaign that’s emphasized the fact that they aren’t SGB “insiders.”

“I don’t think the only thing that makes you qualified to run for SGB is experience within SGB,” Humphrey said. “If you’re a student who is active on this campus and sees this vision for what they can do — I think I’m capable to enact change. SGB shouldn’t be closed off.”

That’s one thing Humphrey said he’d improve as a board member — SGB transparency, specifically when it comes to allocations. He said many clubs on campus don’t know how much money is available to them.

Steinle said he wants to pursue “data-driven” solutions by polling students to determine what their own policy priorities are, with the help of a group of “people that are smarter than me” from the statistics department. He also wants to change restrictions that prevent clubs from collecting money via Venmo — something he said many of the clubs the slate met with are interested in.

Dang said she would address the issues that first-years specifically face, encouraging adapting to college in a healthy way through the distribution of information on sex education and proper nutrition.

The only candidate running without a slate, Reddy noted that as a microbiology major, he’s also one of just two candidates majoring in the natural sciences — the other is Agarwal, a biology and psychology double major. He’s foregone a social media campaign to focus on campaigning in the science buildings, handing out coffee in the mornings and addressing classes.

Reddy, who has no SGB experience, wants to improve resources for science students and efficiency on campus, he said. Though he struggled to detail specific initiatives, he suggested that campus shuttle routes could be made more efficient, such as by eliminating the crosswalk on Bigelow between the William Pitt Union and the Cathedral of Learning. He also indicated an interest in making Sodexo food offerings more nutritious and Forbes Street Market more affordable, and improving SGB’s overall visibility to students.