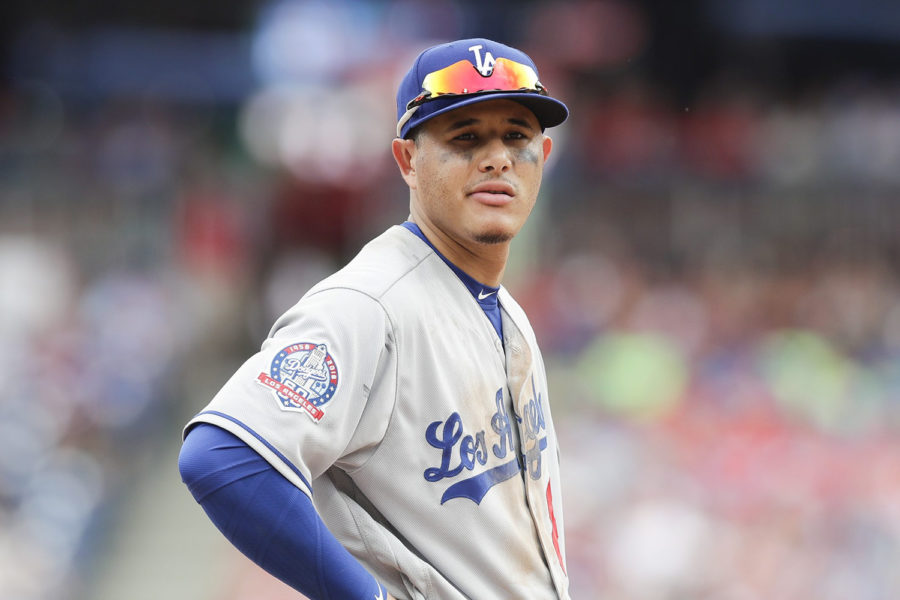 Manny Machado and the San Diego Padres agreed to a 10-year, $300 million contract — the largest free-agent contract in the history of baseball.

The past week has been a big one in the sports world. From a record-breaking free-agency contract  for shortstop Manny Machado to the Steelers’ roster meltdown, it seems no one is safe from making the news. Running back Le’Veon Bell is finally a free agent and basketball player Kevin Durant will join him soon, which already has people talking.

The NBA All-Star weekend is over and that only means one thing — we’re one step closer to free agency. Because of that, much of the sports world has started discussing Kevin Durant’s looming decision of whether to re-sign with Golden State or move on.

Colin Cowherd said Durant should not think twice about re-signing with Golden State. Cowherd assumes the Warriors will win this year and next with Durant back. He even went as far as to say if this were to occur, sports fans could begin to have a debate as to whether LeBron James or Durant is the better player — a debate similar to the typical Michael Jordan vs. LeBron.

But Cowherd is wrong. No matter his career accomplishments, even if he surpasses James in titles, Finals MVPs and career points, KD’s legacy will always be tainted due to signing with Golden State.

When he played for the Thunder, Durant had a 3-1 lead on the Warriors in the Western Conference Finals in 2015. The next year, the Cavs went on to do what Durant couldn’t and beat the Warriors in the Finals, showing Golden State could be beaten. But instead of recognizing this and going back to the drawing board, he threw the thing in the trash and teamed up with his foe.

One argument is that LeBron did it in Miami first, but there are important differences. LeBron went to a good team, leaving the Cavs, which he had dragged to the finals every year because of horrible management. He aspired to take down the Celtics, not join them. KD went to the best team ever, leaving one that was on the brink of success. He bolted on an organization that has a very capable general manager in Sam Presti, not the dumpster fire that has been the Cavs’ front office.

So Durant can do what he pleases. He can rack up rings and Finals MVPs with the Warriors, or try and do it as a Knick. It makes no difference. He will be remembered as one of the greatest to play the game. But because of his decision to join the Warriors, he must always be on the outside looking in on the LeBron-MJ debate — no matter how desperately he wishes to be a part of the discussion.

On Tuesday morning, Manny Machado and the San Diego Padres agreed to the biggest free-agent contract in the history of American sports — a 10-year, $300 million contract. This signing by the Padres definitely has its pros and cons, but only time will tell about the impact of each on the organization.

Let’s touch on the pros first, because everyone loves hearing positive news. The Padres are acquiring a four-time All-Star caliber player. Machado is also known for his arm and his ability to “flash the leather,” as he’s a two-time Gold Glove award-winner at third base. The Padres can insert Machado into either the three or four spot in the lineup, he batted .297 with 37 home runs and 107 RBIs last season. This production along with the production from the eventual call-up of top prospect Fernando Tatis Jr. will be huge for the left side of the Padres’ infield.

There’s only one drawback — huge, long-term contracts never pay off. Alex Rodriguez and Albert Pujols are examples of these ludicrous deals backfiring. At the age of 39, Pujols is set to make $28 million this upcoming season. He is no longer producing to that price tag and it will be no surprise if Machado is subjected to the same fate. Machado will make $30 million every year until he is 36 years old. This historic deal from the Padres will be beneficial in the short run, but will become a liability in the long run.

Just two short seasons ago, the Steelers were a game away from playing in the AFC Championship. Now, it seems that the core of that Steelers team will never exist again. Wide receiver Antonio Brown, who ranks among the best in the league, has demanded a trade from the organization and, according to Twitter, will likely have his request filled by Pittsburgh’s front office.

The drama surrounding Brown has been ongoing since the end of this season, when Brown didn’t play in week 17, expressing his unhappiness with Steelers head coach Mike Tomlin and quarterback Ben Roethlisberger. With rumors popping up of interest in Brown from all around the league, the effect of his trade will weigh heavily on Pittsburgh’s cap this upcoming season.

Steelers running back Le’Veon Bell, who held out for the entire 2018 season due to a contract dispute, will also not be with the team this upcoming season. The Pittsburgh front office announced on Wednesday they would not place any form of tag on Bell in order to retain him this season. Bell will become an unrestricted free agent at the start of the new league year, and it seems that Pittsburgh has no problem allowing their star running back to walk, thanks to the presence of James Conner.

Even by his standards, this week has been filled with drama for Inter Milan star footballer Mauro Icardi.

The controversial striker’s week started with being removed as captain of Inter Milan due to his growing unpopularity among his teammates. Most of the anger directed toward Icardi can be attributed to comments made by his wife and agent, Wanda Nara. Nara, a weekly guest on the soccer TV show “Tiki-Taka” often leaks private information about the club’s players and even goes as far as to throw Icardi’s teammates and manager under the bus when she believes they are not performing well enough for her husband to shine.

The next part of the Icardi saga occurred on Wednesday when he mysteriously refused to travel with the team to its Europa League matchup with Rapid Wien. The following day, a report came out that the striker “ate lunch alone” at the Inter Milan facility and that his wife’s car was attacked by disgruntled fans who were upset with Icardi and his wife’s antics over the past week.

In light of Icardi’s apparent falling-out with the club, a lot of speculation has been made over the potential transfer of the talented Argentine, with big clubs such as Real Madrid and Juventus rumored to be interested in his services. This leaves the Inter Milan board with a difficult question to address — whether or not to sell Icardi. On one hand, Icardi is the club’s best player. But he is clearly a source of disharmony in its locker room.

One player, no matter how good, is not worth sacrificing the continuity of a locker room. But time will tell whether Inter thinks the same.

While analyzing the past season and the team’s needs, Steelers GM Kevin Colbert said the team would not use either the franchise or transition tag on running back Le’Veon Bell. This move allows Bell to enter free agency as an unrestricted free agent to try and demand top dollar for his next contract.

When trying to estimate Bell’s market value, it’s important to look at the payroll across the league for running backs. In 2019, the only two running backs who will be paid more than $10 million are Todd Gurley and David Johnson. The Arizona Cardinals found themselves with the first overall pick, while the Rams lost to the Patriots in the Super Bowl with Gurley’s small impact hurting their offensive output.

Before Bell’s one-year hiatus from the league, he was considered by many to be a top-three running back, known for his patient run style and dangerous pass-catching abilities. Despite his suspension and injury history, Bell still believes in his ability as an offensive weapon, enough so that he is requesting to be paid around $50 million for the first two years of his next contract.

While Bell has set a high bar for any suitors, it’s doubtful he’ll get what he wants. Out of the 17 players who have more than a $20 million salary, only two are non-quarterbacks. Those two non-quarterbacks are premier defenders, two-time Defensive Player of the Year Aaron Donald and Khalil Mack, both all-pros at two different positions.

Realistically, Bell’s market is north of $12 million and south of $18 million. The one thing fans can anticipate in Bell’s contract is a large amount of guaranteed money. If there isn’t, his holdout with the Steelers will have been for naught.