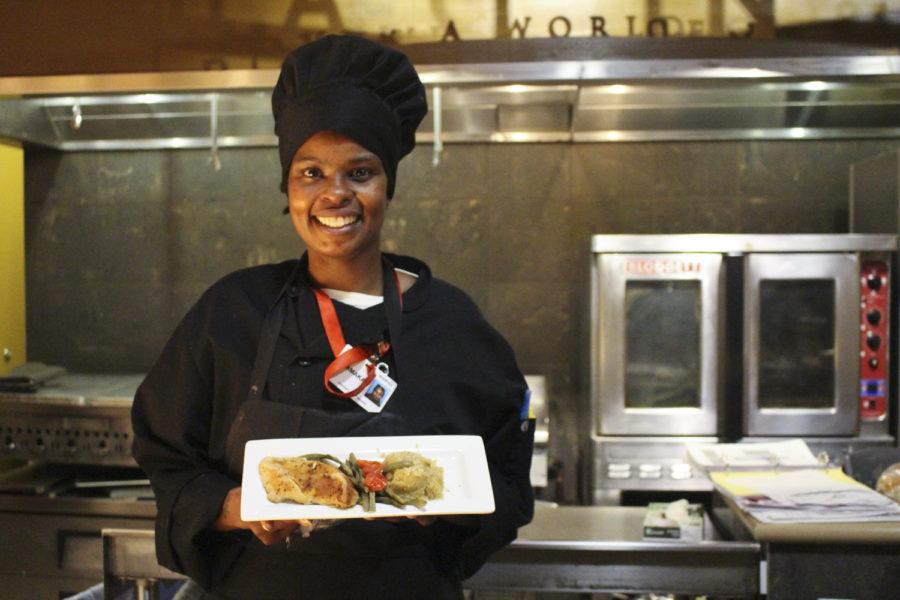 A chef displays a chicken, quinoa and green bean dinner at Magellan’s in Market Central.

When most students swipe into Market Central or The Perch for a quick meal, they don’t expect to see their mother’s homemade curry chicken or shrimp gumbo served on a platter. But over the past few months, Sodexo has allowed representatives from student organizations to submit their own family recipes that they want to see reflected in the dining halls.

Zechariah Brown, a current SGB board member and the new SGB president-elect, emphasized the importance of companies like Sodexo offering not only diverse food options, but also food that is culturally accurate.

“When you’re having your culture represented by people who may not be a part of that group, you always want it to be as accurate as possible,” Brown said. “You don’t want people to say ‘I don’t really like this type of chicken’ because what they’ve been eating wasn’t true to the culture.”

According to Sodexo district manager Abdou Cole, Sodexo made the move to represent different cultures as accurately as possible after listening to the demands of students. Representatives from Sodexo, joined by Brown and SGB member Albert Tanjaya, hold biweekly Eat and Greet meetings on Fridays. The event was founded initially by Ami Fall and Nihita Manem, former SGB board members. Each week has a different cultural theme, and students from different organizations can send in family recipes that correspond to the theme.

“Our goal is to provide cultural diversity through food,” Cole said. “Ethnic diversity creates a positive experience for students and has an influence on their perception of the University.”

For the meeting on Oct. 26 of last year, Sodexo featured its global chef from Poland. It served Korean steak bowls on Jan. 18, and on Jan. 25 it celebrated the Lunar New Year by working with students from China and Vietnam to serve Vietnamese shaking beef as well as Chinese tofu and vegetable stir fry. This is the first step in the process — if the recipes are approved after the Eat and Greet taste-testings, Cole said they’ll be served at Market Central and The Perch.

“At 360 Grill, you will notice the changes that were made, adding a variety of new options, including fried rice, fresh wontons, bok choy, edamame, just to name a few of the changes,” Cole said.

Michael Zanie, the regional district manager of Sodexo, helps ensure the chefs are following the recipes closely, but said sometimes they modify recipes to accommodate the large amount of people they need to feed.

“Not every recipe can be exploded into greater quantities,” Zanie said. “We use ratios that are adjusted to scale.”

Brown said Sodexo and Pitt Dining have been receptive and open to collaborating with other students.

“[They] have given us a lot of freedom with submitting recipes to them and coming in for taste-testings with student representatives to ensure that the food is still culturally accurate,” Brown said.

In honor of Black History Month, The Perch dedicated Feb. 13 to Caribbean-style cuisine, which was accompanied by a live reggae band. Some of the food options offered that night were jerk chicken, fried catfish and sweet potato pie for dessert. For those who were more hesitant to get out of their comfort zone, macaroni and cheese was also an option, which Brown said is a universal food.

But while Brown said the meal was a great idea, he thought curry chicken would have better represented Caribbean people, as opposed to jerk chicken.

“As a Caribbean-American person myself … I found that curry chicken is much more representative of the island as a whole, whereas jerk chicken is something that you do see in Jamaica, but only in Jamaica,” Brown said. “My mom is from Trinidad and that’s not something that she really grew up eating.”

In terms of the band, however, Brown said he thinks integrating music is a great way to showcase a certain region’s culture.

“I think music does play a very integral role in representing people accurately from all different areas, but the music that they choose for that and the composition of that can differ drastically [across] different regions,” Brown said.

Some students, like sophomore economics major Claire Kuzneski, had no clue what they were walking into on Feb. 13 for dinner at The Perch. Kuzneski said she didn’t know Sodexo was having this themed dinner but that she was pleasantly surprised.

“When I walked into [the Perch], I could hear this music over my headphones and I was like, ‘What the hell is that?’ And then I walked up and I saw the band and I was really excited,” Kuzneski said.

Kuzneski also said she thought the food that night was a step up from the typical dining hall food she is used to seeing at The Perch.

Kuzneski’s experience is something Zanie hopes is replicated in the future. He emphasized the importance of exposing students to foods from cultures they may have never experienced before, as well as Sodexo’s openness to suggestions for the future.

“This is a global university,” Zanie said. “Students here have incredible palates and travel all over the world. We are really open to having students send in whatever recipes they would like implemented in the dining services.”