What are the odds: NBA playoff hopefuls 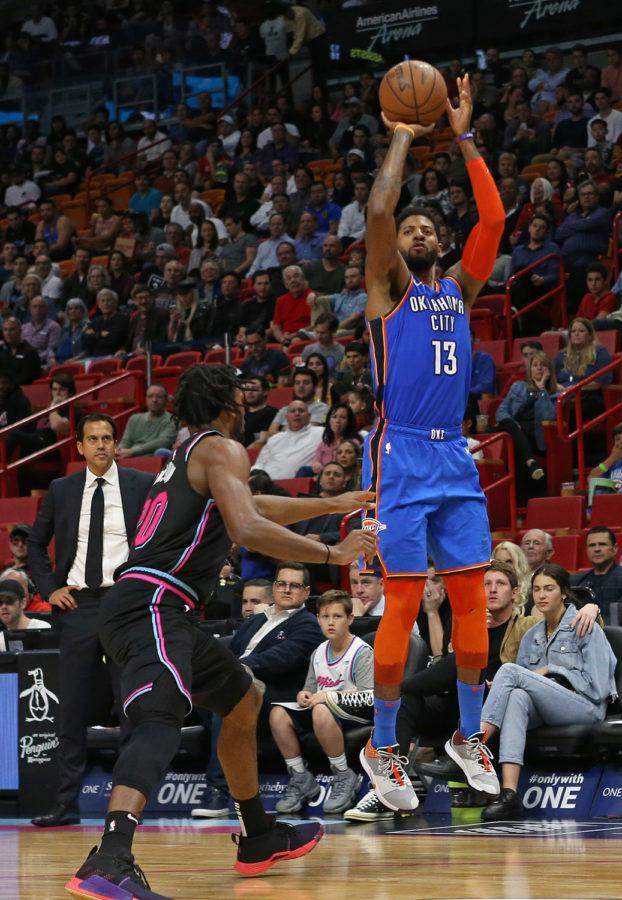 The Oklahoma City Thunder's Paul George (13) shoots over the Miami Heat's Justise Winslow in the third quarter at AmericanAirlines Arena in Miami on Friday, Feb. 1.

Another exciting NBA All-Star Weekend is officially in the books, and teams are now preparing for the final stretch of the regular season. Team LeBron overcame a 20-point deficit to come back and beat Team Giannis 178-164 in the NBA All-Star Game, and I went 3-2 in my picks from the weekend’s festivities, bringing my season record to 23-16.

With a less than two months left in the NBA regular season, let’s take a look at some playoff contenders in action this weekend.

Analysis: Raptors all-time leading scorer DeMar DeRozan will play his first game in Toronto since being traded to the Spurs last summer in exchange for All-Star Kawhi Leonard. DeRozan is averaging a team-high 21.4 points per game this season, but that’s his lowest average since 2014-15. The Spurs have been inconsistent this year, currently occupying the No. 7 seed in the Western Conference. They’ve especially struggled on the road, going 11-19 in games away from home. Expect veteran teammates LaMarcus Aldridge and Rudy Gay to do their best in helping DeRozan get a win against his former team.

The trade has definitely been more beneficial for Toronto. The Raptors are currently the No. 2 seed in the Eastern Conference and look ready to make the NBA Finals for the first time in franchise history. Leonard has been impressive all season long, averaging a career-high 27 points per game. Former G-League forward Pascal Siakam is the team’s second-leading scorer with 16.1 points per game. The 24-year-old Cameroon native has made the leap in his third NBA season, starting more games this season (57) than the previous two combined (43). In the Raptors’ final game before the All-Star break, Siakam scored a career-high 44 points against the Washington Wizards. With Siakam and with the help of newly acquired center Marc Gasol, the Raptors could dominate San Antonio in the paint.

Bet: Spurs cover on the road and bet the over.

Analysis: It’s been a tough season for the New Orleans Pelicans. The team’s best player, All-Star forward Anthony Davis, officially on Jan. 28 requested a trade after rumors had been swirling for weeks. Davis wants to play for a championship-contending team, and sadly for New Orleans, the Pelicans aren’t among them. The Pelicans chose to sit Davis in games leading up to the trade deadline, assuring the star wouldn’t get hurt and tank his trade value. However, to the surprise of most, Davis was not traded and will play for the Pelicans the rest of the season. It’s very likely that New Orleans will move the big man after the season, with teams like the Boston Celtics and Los Angeles Lakers expected to offer anything and everything to get Davis. In the meantime, the Pelicans are not on pace to make the playoffs and will likely lose most of their remaining games in hopes of improving their draft position.

Despite losing All-Star guard Victor Oladipo for the rest of the season with a ruptured quad tendon, the Pacers are currently the No. 3 seed in the Eastern Conference. Oladipo, the 2018 Most Improved Player, was averaging 18.8 points per game prior to his injury. Luckily, the Pacers still have a pretty deep roster that includes the likes of Bojan Bogdanovic, Domantas Sabonis, Darren Collison and Myles Turner. This team has playoff and veteran experience that will definitely help them finish the regular season without their best player. The Pacers have enough athletic big men to hold Davis in check Friday night and get the win.

Bet: Indiana covers the spread, and bet the under.

Analysis: This is a potential Western Conference playoff matchup, as the current No. 3 seed Thunder will take on the No. 6 seed Jazz in the first game back from All-Star break. Led by two All-Stars, the Thunder have enjoyed having Paul George and Russell Westbrook play together this season. George, an MVP and Defensive Player of the Year candidate, is averaging 28.7 points, 8 rebounds and a league-high 2.3 steals per game. PG-13, George’s trademarked nickname, seems to be enjoying his second season in OKC. He re-signed with the team over the summer, after being traded from the Indiana Pacers in the 2017 offseason.

One of the benefits of staying in OKC is getting to play with the high-energy Westbrook. The triple-double king is looking to average double digits in scoring, rebounding and assists for the third straight season. Right now, Westbrook averages 21.7 points, 11.2 rebounds and 11.2 assists per game. The Thunder look determined to make the NBA Finals for the first time since 2013, but they’ll have to make it through the difficult Western Conference.

Led by second-year guard Donovan Mitchell, who’s averaging 22.4 points per game, the Jazz also look ready to make noise in the playoffs. Mitchell isn’t Utah’s lone star, as they also have former Defensive Player of the Year Rudy Gobert, averaging 12.9 rebounds and 2.1 blocks per game this year. The Jazz fill out the rest of their roster with veteran and playoff-tested players like Jae Crowder, Ricky Rubio, Derrick Favors and Kyle Korver. These are the type of guys that are needed to win playoff games, and Friday night will definitely carry a playoff atmosphere. Utah will do everything they can to keep Westbrook and George in check, or else it could be a very long night for them.

Bet: The Thunder cover and bet the over.