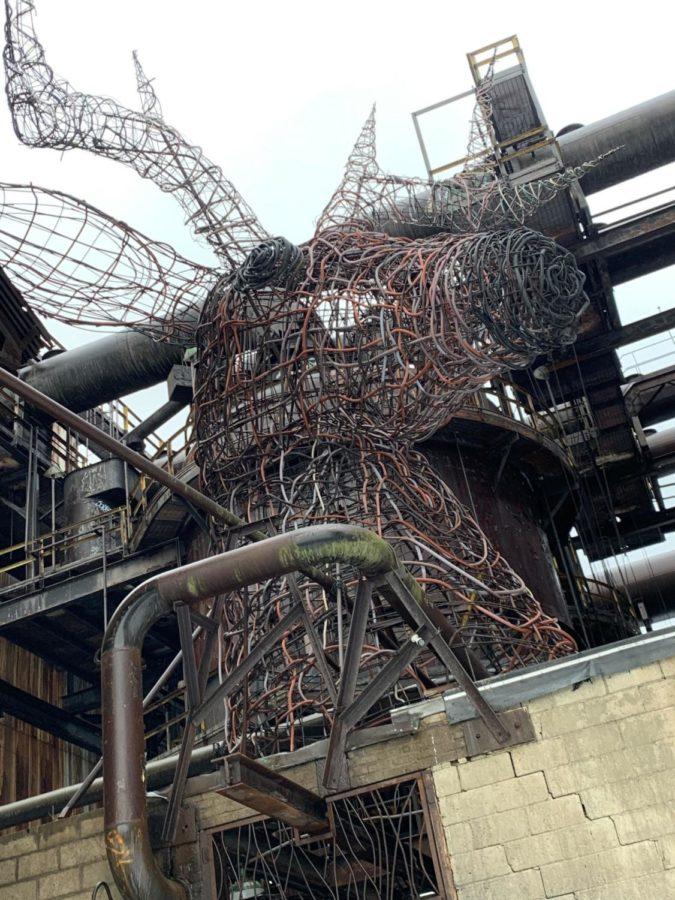 Art installations, like the deer head featured here, are revitalizing the abandoned Carrie Furnace, along with walls of legal graffiti.

By Katie Donohue and Riyan Russell

National landmarks and graffiti rarely go hand-in-hand, as parks employees are often tasked with scrubbing the remnants of spray paint from the walls of historic sites. But at the abandoned Carrie Furnace in Braddock, artist Shane Pilster of 82 Concepts is helping preserve, not destroy, the years of paint.

“I love historic and rustic places,” Pilster said. “There has been graffiti on the grounds [of Carrie Furnace] since the late ’80s and early ’90s.”

Pilster has been creating art since he was a kid, and started painting graffiti when he was in high school with his friends. Graffiti quickly consumed his creativity and energy, and eventually, his love for street art turned into his passion for protecting and expanding the art at Carrie Furnace. In a partnership with Rivers of Steel, an organization that offers tours about Pittsburgh’s heritage, Pilsner helps run the Urban Arts Tour and Graffiti Workshop.

“My initial goal was to create a sanctioned permission area for people to be able to let loose and to showcase their skills,” Pilster said.

Today, Pilster works as a graphic and web designer and creates murals in Pittsburgh. His goal is to help aspiring artists from all around express themselves.

“There was already a developing arts culture there to discuss the post-industrial story of the site, and graffiti was a part of that story,” he said.

Carrie Furnace was a former blast furnace that was operational from 1884 until 1982 and set world records in iron production. Today, two of the furnace’s original structures still stand, and were designated national historical landmarks in 2006. That designation, Historic Site Coordinator Ryan Henderson said, makes it difficult for the art to expand.

“Right now graffiti can’t be put inside the mill since it’s a national landmark,” he said.

But Henderson said he would be open to expanding the tour to include more areas of Carrie Furnace.

Pilster has traveled around the United States and observed that in many major cities there is an appreciation for graffiti, and it is considered an art form. Many of those cities have even legalized graffiti in some of the surrounding areas so that artists can create their pieces. However, in Pittsburgh, Pilster saw that the City has almost no areas left designated for this type of art form. Pittsburgh Mayor Bill Peduto even revived an ‘anti-graffiti task force’ in 2014, which is still active today.

“Some limits I face to make this happen seamlessly are the public’s perception of using aerosol as an art form,” Pilster said.

So far he has built partnerships with South Side Community Council and the Borough of Wilkinsburg, and he’s working on expanding to other areas of Pittsburgh.

“My goal is to establish several places to allow artists to get as creative as possible, and to get artists paid for their work whenever permitted,” Pilster explained.

His favorite part about the Urban Arts Program and the street art at Carrie Furnace is that he can create everything by only using a spray can.

“[Graffiti] has been a part of more than half of my life, and it still brings me joy to create new things,” he said.