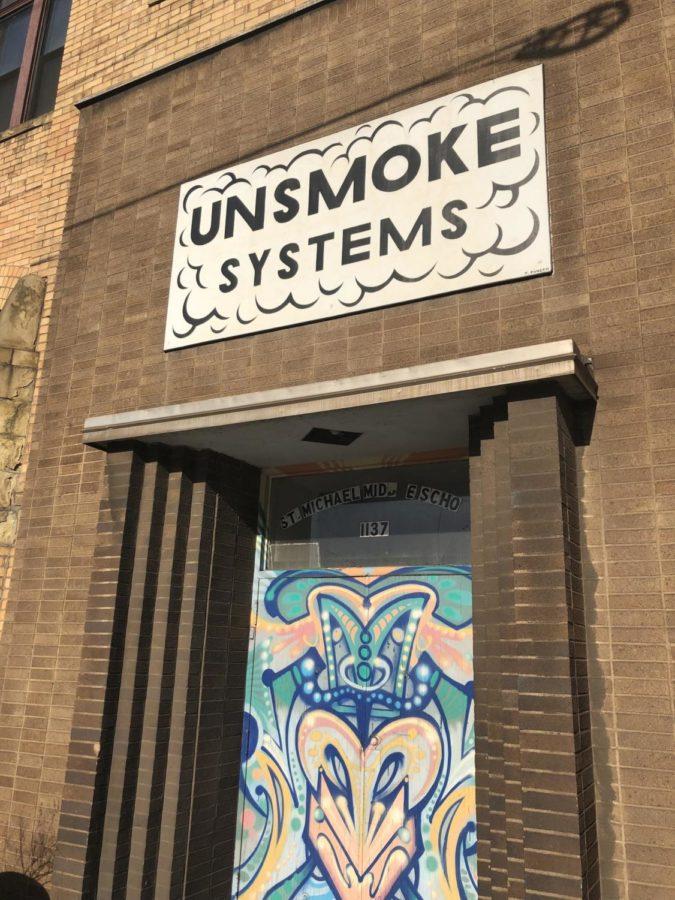 Jeb Seldman acquired UnSmoke Systems Artspace in 2008, and has since transformed it into a community hub for art.

By Jayanna Smith and Amara Bailey

Jeb Seldman saw a problem, and wanted to be the answer.

“There are a lot of artists in the world, but I’m not sure there are enough places to show art,” Seldman said.

So to address what he saw as an issue, he bought a building in 2008 that eventually became UnSmoke Systems Artspace, a gallery and artist-centered space in Braddock. He named the space after a sign left in the building by the previous owners.

“I don’t consider myself an artist,” Seldman said.

But his building seems to say otherwise. When he renovated the space, he left details of the building’s history, like a cut-away in the plaster that reveals pipes and old bricks. The space is quiet, and the sound of patrons walking through the gallery reverberates off of the high ceilings.

“Keeping the building up and running is my art,” Seldman said.

Artists like Zena Ruiz said they appreciated the history that is evident in the space.

“I really liked the way the gallery space had not been renovated to look perfect but had been left as is, which shows how the building was made and how it began to come apart before Jeb started taking care of it,” Ruiz, a resident artist at UnSmoke Systems, said.

Ruiz began as a resident artist at the space in 2009. Since then, her sculptures, print art and performances have been displayed at the space.

“I have a social practice,” she says about her art, by which she means she aims to bring people together.

Seldman has similar goals, and through his work, he feels connected to the community of Braddock. He said that more than 10 years ago, he felt like all the news about Braddock was negative. So he started releasing positive press about the town in an effort to change its image.

“It felt important to me to bring something positive to town,” he said.

Now, UnSmoke has no problem filling its space. The space is booked for the next year and a half with a different artist on display every month. Shamus Ian Fatzinger, a photojournalist, uses his space to focus on multi-media art and not just photography.

“I am always very proud to tell people that I have a studio at Unsmoke. I find that it is a very unique place,” Fatzinger said. “The quality of artists and events associated with it are quite inspiring and I will always love this place.”

“Exhibiting at the UnSmoke has always given me the opportunity to experiment and try new things,” says Briggs.

Briggs mostly makes sculptures, but she also has experience making prints and drawings. She first heard of the place at the counter at the Square Cafe in Braddock from Jeb himself, while eating breakfast — and that was 10 years ago.

Briggs’ work is currently on display at UnSmoke until March 24, and UnSmoke is open Fridays 6-9 p.m. and Saturdays 1-9 p.m.