Chancellor Patrick Gallagher provided updates on a wide array of issues facing Pitt at the Friday Board of Trustees meeting. 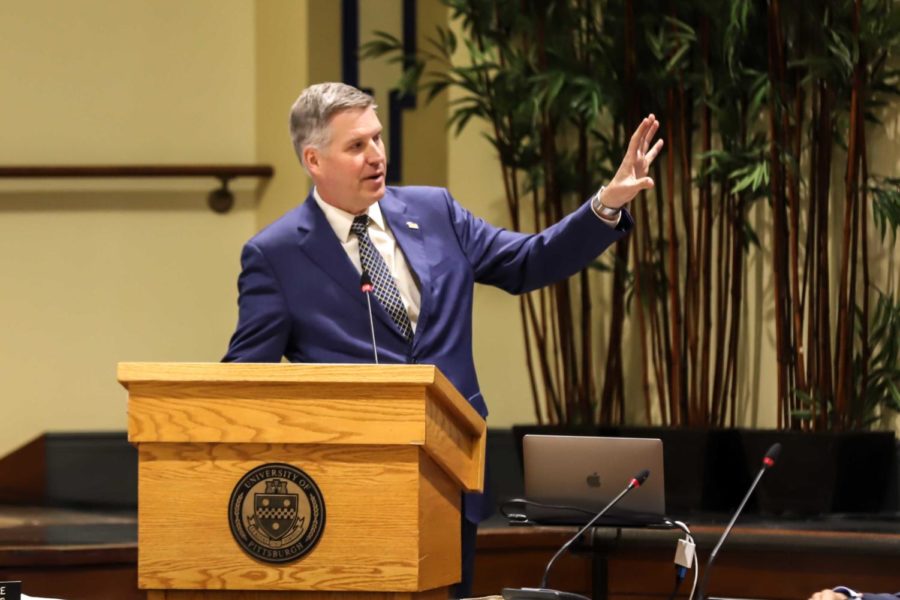 Chancellor Patrick Gallagher speaks during the February 2019 Board of Trustees meeting.

After its last meeting in September 2018, at which a draft version of the campus master plan was released, Pitt’s Board of Trustees tackled issues facing the University at its Friday meeting in the William Pitt Union.

The Board did not vote on any decisions, but Chancellor Patrick Gallagher provided updates on a wide array of issues facing Pitt such as financial aid increases, sustainability efforts and the need to fill key vacant positions in the administration.

Starting this fall, Pitt will match any federal Pell Grant awarded to undergraduate students, Gallagher announced at the meeting.

According to the University, more than 5,000 students currently benefit from Pell Grants, each receiving an average of about $4,500 from the federal government. Pitt will spend about $25 million on the Pitt Success Pell Match Program, Gallagher said.

“One of the metrics we have to start paying greater attention to is how well we are meeting, addressing, these financial barriers,” Gallagher said. “Those things interfere with the process of learning and education.”

Alex Mathias, a Pell Grant awardee and junior nutrition and dietetics major, said the program would help him meet his unmet financial needs to pay for Pitt. He is currently employed through a work-study program at the Office of Admission and Financial Aid.

“It’s really going to make a difference for everyone,” Mathias said. “Taking that burden off the back of the mind is going to be so helpful.”

Another Pell Grant recipient and OAFA employee, Ivie Odia, a junior psychology major, said she hopes the program will set an example and inspire other universities to provide more financial aid to students.

“There are other schools that are just as great as Pitt, and other people are like … ‘I got in, but I can’t pay for it,’” Odia said. “If other schools see that Pitt is making these steps, they’re more likely to be, like, ‘they did that, we’ve got to do this, too.’”

SGB President Maggie Kennedy said SGB was proud of the administration team’s work to introduce the program, and how it will affect the composition of the student body in coming years.

“We’re looking forward to seeing how this program will open doors for more students, helping to create an increasingly more diverse and inclusive environment here at Pitt,” Kennedy said in a text message.

Pitt has announced several other updates to financial aid programs in the past several years, such as Panthers Forward, a program to provide students with up to $5,000 to offset federal student loans. The University expects to spend more than $130 million on financial aid in 2019–20, a 47 percent increase compared to contributions five years ago.

The announcement regarding tuition comes while funding for next year from the Commonwealth of Pennsylvania is unclear.

Pitt’s funding will be held flat next year, according to Gov. Tom Wolf’s proposed budget released Feb. 5, after receiving a 2.8 percent increase last year. Pitt initially requested a 6.5 percent increase in funding from the Commonwealth, which would be paired with tuition increases of about 3 percent for in-state students and 5 percent for out-of-state students. It is unclear how tuition prices will be affected if Pitt does not receive its requested funding.

In an interview after the meeting, Gallagher said he was unsure about when tuition prices would be confirmed for next year.

“Because we’re kind of tied to when the State moves, we’ve only really, typically, been able to announce that after we know what the State has done,” Gallagher said. “Based on the discussions I’ve had with lawmakers in Harrisburg, they would love to see an on-time appropriation process.”

Gallagher and the heads of the other state-related universities will testify in front of the Senate Appropriations Committee in Harrisburg next Tuesday at 10 a.m. On March 26, Pitt will hold its annual Day in Harrisburg, an event where students and administration lobby state legislators for increases in funding to the University from the Commonwealth.

As the debate over tuition continues, some, including SGB member-elects Anaïs Peterson and Eric Macadangdang, say there is a mismatch between tuition increases and salary bumps for senior officials.

The Board’s compensation committee approved several salary increases in December 2018 to the tune of 2.25 percent for many top officials. Gallagher’s salary was increased to $555,000, and he will receive a deferred bonus of $500,000. The committee also discontinued the practice of providing vehicles to senior Pitt officials, which was established in 2002. As a replacement, the officials will receive a salary increase of $5,600.

Peterson, SGB member-elect and junior urban studies major, said the Board should grant students a more prominent role in the debate over tuition pricing.

“They know in the back of their heads that students can’t keep paying exorbitantly high amounts of tuition, but they’re not seeing it,” Peterson said. “The biggest financial barrier is the fact that tuition keeps going up every year.”

Gallagher and the Board also announced that searches were underway to fill key leadership positions.

“The regional campuses are absolutely vital to our mission,” Gallagher said. “We are committed to making sure we find exceptional leaders for those important campuses.”

David Chavern, chair of the Board’s risk and compliance committee, said the University was planning on hiring a lead risk officer as part of a new University-wide enterprise risk management program. The committee would oversee the plan’s implementation, and provide occasional updates to the Board.

Gallagher also provided an update on sustainability efforts at the meeting, about one year after the Pitt Sustainability Plan was released.

The plan’s objectives, to be accomplished in the next decade, include reducing greenhouse gas emissions by 50 percent, obtaining 50 percent or more of the University’s electricity from renewable sources and cutting energy intensity and water use. Pitt announced last month it was entering into a deal to purchase electricity from a planned hydroelectric dam on the Allegheny River.

“We have a plan now, and it sets out incredibly ambitious goals,” Gallagher said. “We are making some real, meaningful progress here.”

But Peterson said it is two-faced to promote sustainability efforts while the University still maintains investments in fossil-fuel companies.

“To say that they are a sustainable University while they are still invested in fossil-fuels is so hypocritical, because no matter how much effort they put in to recycle on campus, and composting, and renewable energy, they’re still actively funding natural gas infrastructure in this area,” Peterson said.

But Aurora Sharrard, Pitt’s Director of Sustainability, said Pitt is following the plan and examining ways to invest the University endowment in a socially responsible way.

“One of the 61 goals in the Plan is the establishment of a Socially Responsible Investment Committee, which occurred in January 2018,” Sharrard said in an email. “The Committee’s report to the Chancellor is expected to be completed in mid-2019, helping chart the process and course for what’s next in the ongoing discussions about how the University applies environmental, social and governance (ESG) criteria to its investments.”

The next meeting of the Board of Trustees is on June 28.