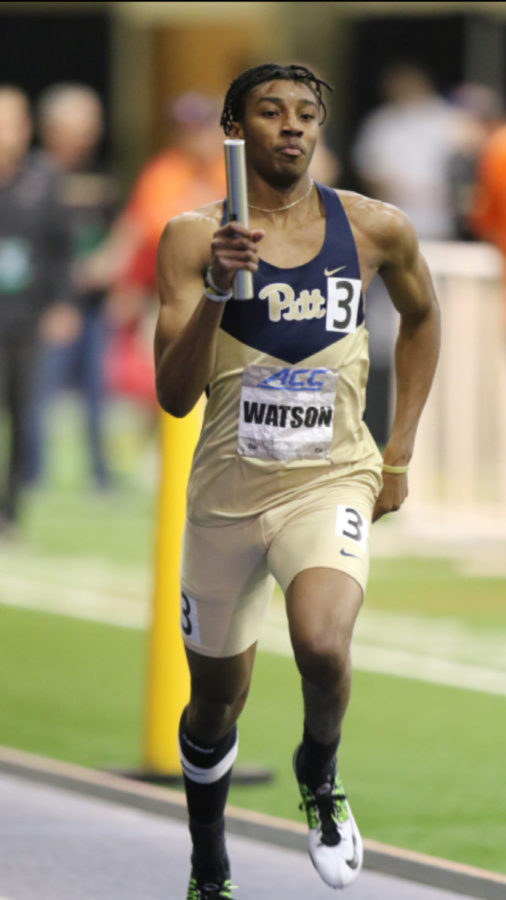 Junior Dante’ Watson finished eighth in the 800m run and was part of the 4x400m relay team that took seventh place.

Several Panthers made it onto the podium at the ACC Indoor Championships in Blacksburg, Virginia, but none made it higher than sophomore Greg Lauray, who cleared the bar at 2.19 meters to take gold in the high jump and break his own school record.

“Once I cleared it, I was like, ‘Finally,’” Lauray said. “Finally got the PR, finally broke the school record.”

Lauray’s 7-foot-2-inch jump put him in coveted company — only three other Panthers had ever won an individual title at indoor championships, making Lauray the fourth.

Head coach Alonzo Webb put the teams’ finishes in perspective, noting it was a first for many of the young athletes and that he expects them to carry some momentum going forward.

“With a team like ours … a lot of the people who came to this meet, it was their first experience in a championship setting,” he said. “So we have to be up to that challenge, and I think we’re going to be.”

The meet kicked off Thursday with the women’s pentathlon and the first four parts of the men’s heptathlon. Pitt scored points in both grueling events, with sophomore Breanna Phillips placing sixth and sophomore Cobe Wiggins placing eighth. Both excelled in the individual long-distance running sections — Phillips took second in the 800-meter run and Wiggins won the 1,000-meter run.

“The 800 is actually my favorite event, because I was in middle school and high school running it, so that was the one event I really counted on,” Phillips said. “I strained my hamstring twice this season, so I didn’t even think I was going to make it here.”

While she took 10th in the finals of the 1-mile run on Saturday by finishing in 4:50.44, senior Miranda Salvo finished her indoor career on a high note by setting a Pitt record with a time of 4:41.65 on Friday.

“I live for competition,” Salvo said. “It’s the reason that I love the sport so much. And I’m just so blessed to be able to be here, and to be competing against national-caliber athletes.”

In addition to his 800 and 4×400 placement, Watson also scored points on Thursday as part of the men’s distance medley relay. The quartet of Watson, Wilson, junior Drew Glick and sophomore Zach Lefever took sixth place, meaning Watson was the only Panther to contribute points in three different events.

“The energy was amazing,” Watson said. “And it’s a little bit easier when you hear all the crowd noise and you hear the energy of your teammates clapping for you and cheering for you.”

The Panthers will now begin to shift their focus toward the outdoor season, with the first competition coming March 15 at Georgia Tech’s Yellow Jacket Invitational.