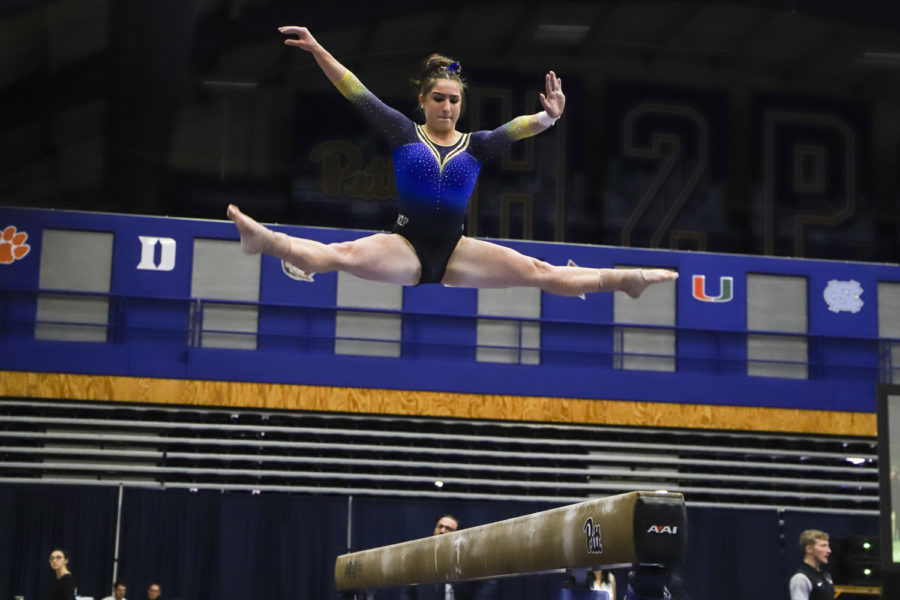 Pitt gymnastics achieved its highest score this season on Friday night. It placed second against West Virginia University and Ball State, losing to West Virginia by less than half a point.

The weekend in Pitt sports saw the wrestling team close the regular season with a win over a ranked opponent, the baseball team sweep its tournament competition and the women’s swimming and diving team set school records and land ACC Championship top-10 finishes. Unfortunately for the Panthers, it wasn’t a completely flawless weekend — the softball team posted a 1-4 record and the women’s tennis team went winless in both its two matches.

The Pitt women’s swimming and diving team performed admirably at the ACC Championships in Greensboro, North Carolina, with multiple swimmers breaking school records and posting top-10 finishes. But it wasn’t enough to make a significant splash in the stingy ACC, as the Panthers finished 10th out of 12 teams with 334 total points.

“We had a lot of great individual performances throughout this meet, but overall we didn’t perform at the level that I know we’re capable of,” head coach John Hargis said. “I’m disappointed because these student-athletes worked so hard all season, and I’m so proud of their efforts. I think we’re a better team than we showed here.”

Daigneault was also a common denominator in Pitt’s record-breaking relay teams, leading off the 400-yard medley relay team of herself, first-year Dakota Elliott, junior Madelyn Shaffer and senior Rachel Brown with a 100-yard backstroke time of 53.04 to beat her own record. That tandem would finish ninth in a school record time of 3:37.78, while the quartet of Daigneault, Shaffer, sophomore Camryn Forbes and sophomore Kailyn Swantek swam a school record 1:30.05 to finish eighth in the 200 free relay.

Next up for the women’s team is the NCAA Last Chance Meet in Columbus, Ohio, on March 3, while the Men’s ACC Championships begin this Wednesday in Greensboro and will conclude Saturday.

It was a tough weekend for Pitt softball, as the team finished with a 1-4 record at the UCF Knights Classic in Orlando. Luckily for the Panthers, their one win came in a 2-0 shutout against rival Penn State. In that win, redshirt sophomore Brittany Knight pitched an excellent game, allowing just five batters to reach base in a complete game.

Pitt struggled to generate offense in its other games, losing a 5-0 shutout to Coastal Carolina and a 9-1 mercy-rule blowout to UCF on Friday. Facing the same two teams on Saturday, the Panthers fell 11-3 in five innings to Coastal Carolina and again in a closer 2-0 contest to UCF before finally redeeming themselves by beating Penn State on Sunday.

The Panthers’ overall season record after the weekend sits at 2-12, with both of their wins the result of appearances by Knight on the mound.

Pitt will look to turn its season around next weekend when the team plays five combined games against Ole Miss and Nicholls State as part of the Ole Miss Classic.

Pitt wrestling finished off a strong regular season Friday night, securing a 20-15 win over No. 23 Virginia in Charlottesville.

After the match was tied at 8-8, redshirt sophomore Micky Phillippi created some separation with a three-point win in the 133-pound weight class. The Panthers held firm after that, preventing Virginia from taking back the lead.

The win gives the Panthers a regular season record of 13-3 overall and 3-2 in the ACC, and the team will now look toward the ACC Championships at Virginia Tech starting March 9.

Pitt baseball came into the weekend with three games on the schedule at the Wofford-USC Upstate Tournament in Spartanburg, South Carolina. Rainy conditions caused Friday’s game to be postponed and Saturday’s game to be cancelled, but Pitt won each of its two games, emerging from the storm unscathed.

Saturday afternoon’s game against USC Upstate, which was postponed from Friday, saw Pitt win 6-3 after getting out in front in the first inning and scoring four runs.

Sunday’s game against Bucknell was much of the same story, with the Panthers scoring three runs in the first inning and never allowing the Bisons to close the gap. Junior pitcher Dan Hammer received the win on Sunday, extending his season record to 2-0. After posting losing seasons for the past two years, Hammer has already matched his win total from last year in just two starts.

The Panthers return to the action next weekend, with four games scheduled for the Russmatt Central Florida Invitational in Kissimmee, Florida.

The Panthers honored their four seniors — Brittany West, Charli Spivey, Krista Collins and Lucy Brett — and also sent four gymnasts to the podium during the competition. Brett and West performed exceptionally in their last home meet, with Brett earning a score of 9.850 to tie in first place on the bars and West placing third on the beam with a 9.800.

Other top finishers were junior Rachel Dugan, who placed third on the bars with a 9.825, and junior Alecia Petrikis, who took third on vault with a season-high 9.850.

Next time out, the Panthers will face a nationally ranked University of Minnesota team on the road this Saturday.

Pitt’s tennis team fell to two ACC foes over the weekend, first 5-2 at home to Virginia Tech on Friday then 7-0 at No. 31 Georgia tech on Sunday.

Against Virginia Tech, Pitt’s only nationally ranked player, No. 99 sophomore Claudia Bartolome, secured a sound individual win in straight sets. Senior teammate Gabriela Rezende won as well, coming back from a first-set loss to win the final two sets, including a marathon third set that resulted in a 10-8 win.

Pitt had even less luck at Georgia Tech on Sunday, losing every individual and doubles match despite some close finishes, namely seniors Luisa Varon and Natsumi Okamoto losing in tie-breaking third sets.

The Panthers are now 4-6 overall and 0-4 in the ACC, and their next matches will be at home this weekend, first against the University of Miami Friday then against Florida State Sunday.