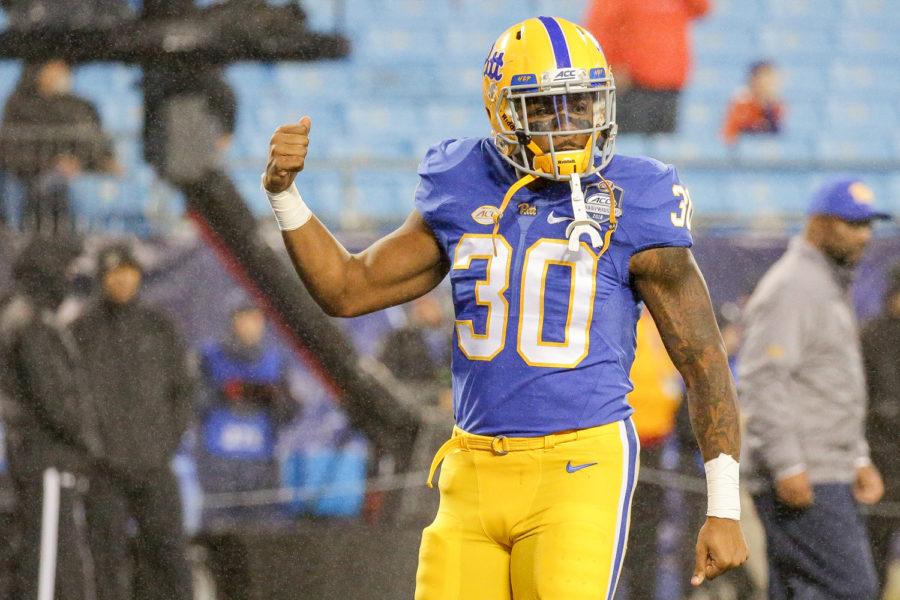 The iconic Pitt Victory Song, written in the 1920s, ends with the line, “For the blue and gold shall conquer as of old, so fight, Pitt, fight!” The “blue and gold” the song references has undergone some changes throughout the decades, with the current shades being dark navy and champagne yellow, but the athletic administration has hinted that will change in the near future, back to the royal blue and mustard yellow fans that know as the “retro colors.”

According to Director of Licensing and Merchandising Lori Burens, Panther fans should look for an official statement coming later this spring.

“We are anticipating some updated news from a branding perspective later this spring,” Burens told The Pitt News. “We could circle back on this at the end of the semester.”

Until then, fans will have to take the subtle hints in stride. Nostalgia appears to be a valuable selling point for the athletic department’s marketing team. The eye test at any sporting event will show how popular the retro colors are among students and alumni alike.

The empirical data backs up the eye test. In October of 2016, the Pitt Team Store saw a 26-percent increase in apparel sales after adding more retro gear, compared to the previous year.

For now, Pitt’s marketing team and athletic department are subtly hinting at a restoration of the classic colors. Since Pitt’s revival of the Pitt script for all varsity teams and the fresh retro-colored alternate uniforms in 2015, Pitt’s marketing department has leaked some of its suspected rebranding plans.

By the end of this academic year, all of Pitt’s varsity teams will have displayed their version of the retro uniforms. The Pitt Shop is advertising the retro colors on its website and retro-colored backpacks have been spotted around campus. Pitt also unveiled a new studio in the Petersen Events Center on Oct. 4 of last year, all decked out in retro colors. Even the athletic director herself, Heather Lyke, has been spotted around campus in the royal blue and gold.

Lyke has been hounded about the return to retro ever since she accepted her position in 2017, but has been cautious in her response. At a press conference last fall, she was slightly less bullish.

“We have been studying that, obviously, since I got here,” Lyke said. “The way the uniform process works, and our relationship with Nike is exceptional, but you order things so far in advance, so you have to plan it out. That will be something for us to talk in the near future about.”

The writing is on the wall –– literally. When a fan enters the Fitzgerald Field House for a volleyball match or gymnastics meet, their eyes are immediately drawn to the massive “H2P” banners recently installed above the bleachers on the far side of the gym. The royal blue signs with a bright yellow outline on the lettering stands in striking juxtaposition to the way the rest of the facility is decorated, with dark-navy outlines and champagne-yellow Pitt script logos.

Originally, it was the men’s basketball and football teams that carried the banner of Pitt retro. They were the first teams to receive alternate uniforms with the classic colors immediately following the uniform upgrade in 2015. This year, both teams have worn retro uniforms four times. The Oakland Zoo even tweeted a video of a new retro-colored light show to be used at the Petersen Events Center for the men’s basketball game against Clemson on Wednesday.

For years, the prospect of returning to the bright blue and yellow, made famous by the likes of Dan Marino, Tony Dorsett and Jerome Lane, was nothing more than a pipe dream for nostalgic fans. Ever since Pitt returned full-time to the Pitt script logo, the pressure for Pitt to restore the colors of what many consider to be a golden era of Pitt Athletics has gotten heavier.

Pitt football first donned what is today known as the retro colors in 1973, the first year in the tenure of head coach Johnny Majors. Majors was hired by then-Pitt Chancellor Wesley Posvar as a way of breathing life into a middling football program. Majors did just that, improving his win total in three straight seasons before going undefeated and winning a national championship in 1976.

There was one issue he had to fix before that could happen, which Majors addressed in an interview with The New York Times.

“I looked at their uniforms,” Majors said. “And I thought they were pretty dull.”

Highlighting that sense of pride and distinction was intentional. Majors, who designed the uniforms in which his Panthers played, utilized the blue and gold to help Pitt stand out from rival Notre Dame, who showcased a similar navy blue and gold look.

When the glory of Pitt’s latest national championship is relived through pictures or video, the retro colors are prominently displayed on the backs of one of the University’s greatest teams. The 1976 football team is the reason so many Pitt fans associate the colors with success and tradition.

Pitt stuck with those colors until 1997, when it switched to the current navy and gold color scheme and a roaring Panther replaced the classic Pitt. Between the demolition of Pitt Stadium in 1999, the loss of the script and the relocation of men’s basketball from Fitzgerald Field House to the Petersen Events Center, Pitt has lost some of the monuments to the success built during the ’70s and ’80s.

After the first ACC Football Championship appearance in school history and the hiring of Jeff Capel to lead the men’s basketball team, it seems as though some of Pitt Athletics’ momentum is back. The color change could be the next step.

It’s obvious –– not only does nostalgia sell, but so does style. The defining colors and images of Pitt athletic history occurred with Panthers proudly wearing their royal blue and mustard yellow, from the 1976 Sugar Bowl to Jerome Lane’s legendary, backboard-shattering dunk. Pitt Athletics has the opportunity to sell more gear, expand fan engagement and help attract athletes to Pitt by going back to the retro colors of the Panthers’ glory days. People should expect that move sooner than later.