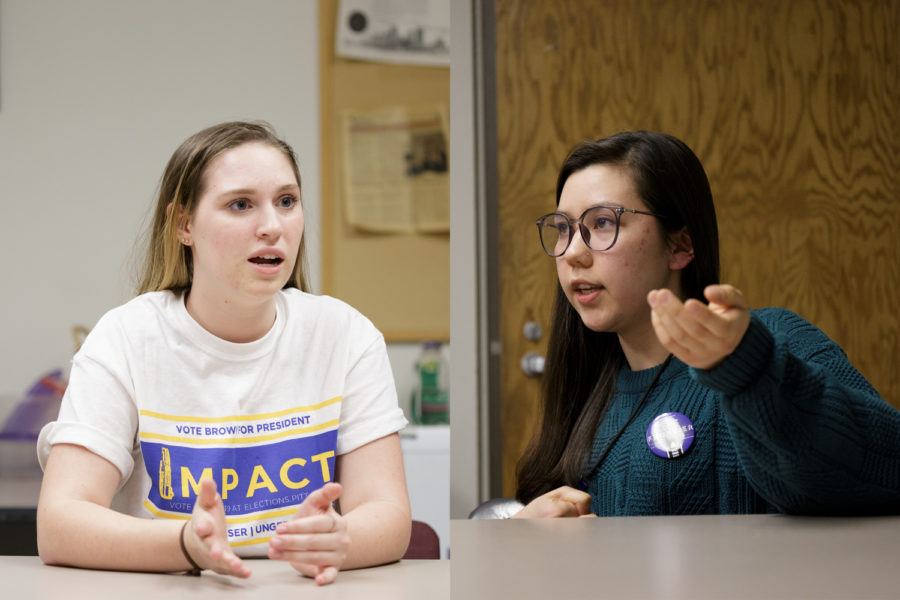 Due to the tie between Caroline Unger (left) and Anais Peterson (right) during SGB’s 2019 election, a runoff election will be held on March 5 to determine SGB’s 2019 executive vice president.

There’s one election left before the lineup is completely decided for next year’s Student Government Board. SGB announced Monday the office of executive vice president will be decided by a runoff election between the top two candidates on March 5.

The position is usually filled by the board candidate who scores the most votes. But after Caroline Unger and Anaïs Peterson won exactly 1,154 votes apiece in last Tuesday’s election — an unprecedented situation not totally covered in SGB’s Elections Code — the Elections Committee was left scrambling to figure out how to decide who would take the title.

Like the general election, the runoff election will be open from 8 a.m. to 8 p.m. on elections.pitt.edu. Elections Committee Chair Katie McLaughlin will announce the winner at that night’s public meeting.

While the Elections Code says there should be a runoff election in case of a tie between presidential or board candidates, it doesn’t give protocol for a tie for the top spot on board. McLaughlin said the committee decided on the procedure after reviewing the code and discussing the matter with SGB adviser Steve Anderson.

Peterson ran on a platform of fossil fuel divestment, sustainability and administration accountability. She wants to create a time for public comment at public Board of Trustees meetings like last Friday’s.

Unger, the current chair of the Facilities, Technology and Transportation Committee, wants to pursue campus safety policies, including a streamlining of the University’s two crime alert systems by combining them into one. She also hopes to create free and reduced meal plans for food-insecure students.

As executive vice president, either Peterson or Unger will serve as the speaker of SGB’s Assembly, a body comprised of students representing student organizations. Whoever wins will also become president if SGB President-elect Zechariah Brown steps down over the course of the year.