Dhirana teams from all over the nation compete at Soldiers & Sailors 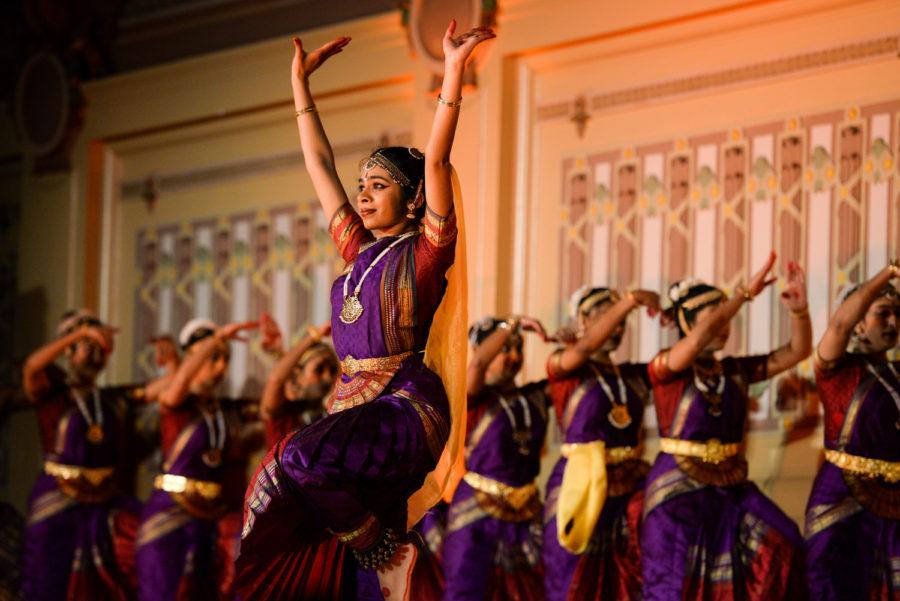 With colorfully coordinated clothing and bells around their feet, dancers in this year’s Dhirana competition used their bodies and facial expressions to tell stories ranging from classic Hindu tales to modern stories of immigration and acceptance. The dancers showcased how Indian classical dance is a performative art form, featuring both classical and contemporary music and displaying emotions ranging from scary and violent to happy and peaceful.

Crowds gathered in Soldiers & Sailors auditorium on Saturday for the seventh annual Dhirana national Indian classical dance competition as eight collegiate dance teams competed for a $1,000 cash prize and trophy. All of this year’s ticket proceeds went to the Birmingham Free Clinic, a Pittsburgh organization that provides support to uninsured communities.

Pitt’s very own Indian classical dance team, Pitt Nrityamala, which was founded in 2013, has hosted the Dhirana competition for seven years. Indian classical dance is an umbrella term that encompasses a wide variety of different dance styles including Bharatanatyam, Kuchipudi, Odissi, Kathak, Kathakali, Mohiniattam and Manipuri.

This year Natya at Berkeley took away the first-place prize, with GT Pulse and UMD Moksha coming in second and third place, respectively. Pitt Nrityamala co-captains Anupama Jayachandran and Srividhya Madireddy described their appreciation for the hard work and efforts of the competing teams.

“I think they definitely deserved it,” said Jayachandran, a sophomore molecular biology and anthropology major. “The pieces that they put on were incredible in terms of outside of their theme itself. Just the way that their dancers moved together as a team, their synchronization, the power and just the kind of emotion that they were able to convey from the stage is phenomenal.”

This year’s lead sponsor was Srinivasa Prasad International Foundation for the Performing Arts, which is focused on preserving the Indian classical dance tradition and helping North American youth promote the dance and pursue their dance passions. The foundation was created in honor of Srinivasa Prasad Gutti, a world-renowned classical Kuchipudi dancer who passed away in a car accident when returning home from a competition. While some dance teams chose to incorporate more contemporary themes in their music choices and choreography, SPIFPA’s Most Classical Award also went to the first-place-winning team Natya at Berkeley for its emphasis on preserving the ancient traditional Indian dance form.

The performances were fully self-choreographed by the dance captains with the aim to tell a story. The teams made creative videos to introduce their dances and the themes behind the stories they told. Performances included JHU Shakti’s retelling of the three brothers in “Harry Potter” as the “Tale of Three Sisters,” as well as Cornell Anjali’s depiction of the story of the Hindu god Krishna, who is discovered to hold the entire universe inside of his mouth. The Cornell Anjali dancers expanded this astrological theme and portrayed the different zodiac signs through dance.

Ananya Reddy, a junior biology major competing in JHU Shakti who had been on team for two years, said the process of perfecting the dance moves required extra effort because the team members came from a variety of different dance backgrounds.

Despite most of the team members having studied the classical dance form of Bharatanatyam, Reddy explained that even within this type of dance there are many different styles. Each dance teacher has his or her own variation when teaching students. This year’s judges consisted of dance specialists and instructors, including Guru Smt. Natyakalavathi Jaya Mani, Guru Smt. Dr. Uma Vyjayanthimala Kallakuri, Guru Smt. Dr. Chethana Raghupathy, Guru Smt. Dr. Bdinu Madhavi Gutti, Guru Smt. Shobhitha Ravi and Guru Smt. Antara Datta.

Audreela Deb and Harsha Mikkilineni — co-directors for the Dhirana student organization this year — discussed the process that went into planning and preparing for the dance competition. Both directors previously danced in Pitt Nrityamala and wanted to continue promoting Indian classical dance at Pitt through organizing this national competition. These co-organizers oversaw all of the 11 different committees within Dhirana that focused on different aspects of planning such as fundraising, logistics and sponsorship.

“All of this is so we can preserve Indian classical dance and showcase it to broader audiences,” said Mikkilineni, a senior sociology major and a former Pitt Nrityamala captain. “This is partly our Pittsburgh community, which is a huge part of our show because there is a really solid Indian population here who really loves the traditional arts, but we also want to show it to the Pittsburgh campus, just to get this really old art form into people’s minds.”

The performance ended with the Mangalam, where all of the dance teams came together on the stage and danced together to thank the audience and god.

“This whole system of the classical Indian dance collegiate circle is completely student-run,” said Jayachandran. “It’s all the students on the teams itself who choreograph the pieces, they create their mixtapes, everything is student-done and then Dhirana itself is completely student-run. And it’s crazy to think about just how professionally run the show is and it’s just college students.”