‘Fighting with My Family’ leaves out the fight, waters down Paige 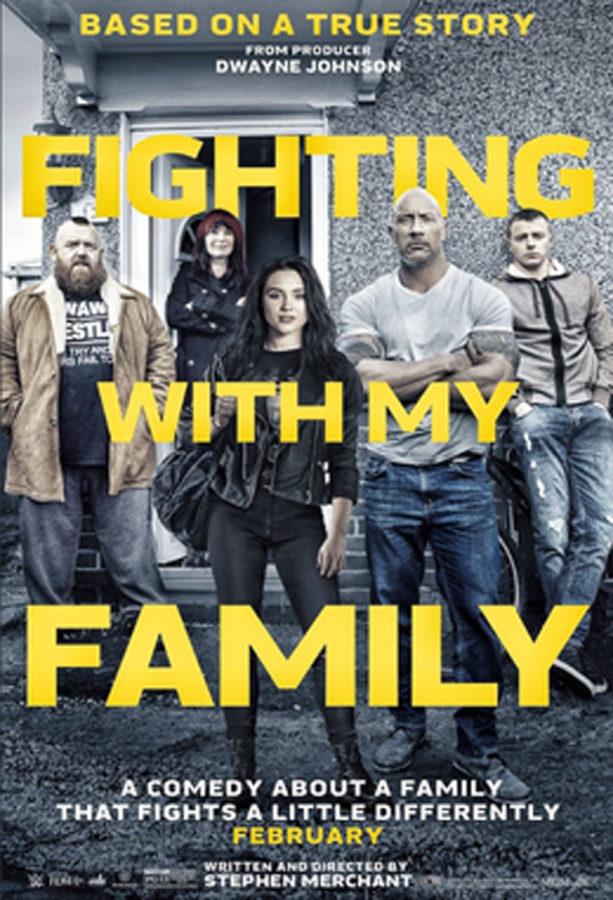 “Fighting with My Family” release poster.

The new film “Fighting with My Family” takes on the challenge of portraying the deep emotional highs and lows of WWE superstar Saraya-Jade Bevis (Florence Pugh) — who is known simply as Paige in the ring. Many of her biggest battles were with her family as she rose to prominence in the company. Though the film adequately shows this, it is not a great watch for actual fans of professional wrestling.

To anyone who watched Paige’s main-roster debut live in April 2014, the movie presents a disappointingly watered-down display of her journey through WWE’s developmental territories before becoming Divas champion. The timeline and pacing of the second half of the film is too rushed, cramming three to four years of events into just 30 minutes.

Paige’s reign as inaugural NXT women’s champion is not even acknowledged throughout the plot, and her entire stint in NXT is represented by only a few house-show performances. Even with Paige’s extensive wrestling background and upbringing, which is thoroughly covered in the first half of the movie, she spent significant time in Florida Championship Wrestling before NXT took over as WWE’s official third brand.

The representation of NXT talent is also way off. Paige gets repeatedly frustrated at her competitors for coming from modeling, cheerleading or dancing backgrounds with little to no knowledge about how to actually wrestle safely.

While the divas era of wrestling, which Paige developed through, certainly had several of these types of women, WWE also began to sign more wrestling-literate women shortly after. But Sasha Banks, Bayley and Becky Lynch, all former NXT and main-roster women’s champions in their own right, bear no mention in “Fighting with My Family.”

Pandering to the non-wrestling fans in this instance really affects the credibility and legitimacy of not only Paige’s story, but that of women’s wrestling in its entirety. Even in the “bra-and-panty match” days, there was always more than one woman who could successfully carry out a solid in-ring performance, but the female talent shown in “Fighting with My Family” suggests otherwise.

Eliminating Paige’s NXT time makes it seem like just anyone could have been chosen to not only debut the night after WrestleMania, but win a major championship on the same night. Her anti-diva, take-no-prisoners persona doesn’t get to fully shine through Florence Pugh’s young face as well as her performance and makes Paige seem like a flat character.

This is particularly apparent at the end during Paige’s debut match against Divas Champion AJ Lee with the title on the line. The match doesn’t at all represent Paige’s real-life demeanor — she accosted Lee on that night to “congratulate” her, champion to champion, on her extensive championship reign before blindsiding her.

Plus, Paige still held the NXT women’s championship during her debut, making her the only woman in WWE history to hold both the NXT and Divas titles at the same time, as well as the youngest Divas champion at 21 years old.

The Paige and Lee feud was entertaining due to the pairing of the two crazy divas on the roster, with Paige being the British freak and Lee taking on a bipolar character. But with both of their personalities turned way down in “Fighting with My Family,” the finale of the film falls flat and does not at all capture the emotional feel of the real match.

Casting actual WWE superstar Zelina Vega as Lee is questionable as well, since her current TV character normally displays a sweet, docile disposition, and her delivery of the insults to Paige felt fake and forced.

For this movie to truly serve as the biography it wants to be, it would have made more sense to just include footage of the actual match, or at least a combination of the real deal and its interpretation, since clips of real WWE programming were included in the final cut of the film.

Surprisingly, fictional character Hutch Morgan (Vince Vaughn) adds the only real point of contention in the film, making him invaluable to the plot development. Though he continuously demeans Paige, he ends up becoming an advocate for her. While the addition of Morgan was surprising, Vaughn delivered a solid, believable performance, which totally deviates from his usual comedy roles.

Paige’s relationship with her brother, wrestler Zak Zodiac, pilots the plot, leading fans into a part of Paige’s life that didn’t often get mentioned on WWE’s weekly programming. It was always mentioned that Paige came from a wrestling family, but the personalities and relationships among them never got explored.

Of course, Paige’s most interesting — and more movie-worthy — years come after the conclusion of the film, for better or worse. After a serious neck injury, Paige was suspended from in-ring competition due to failing multiple drug tests, which she claimed was because of medication prescribed after the surgery. After that, things went from bad to worse.

Before the last scene in the biopic, Dwayne “The Rock” Johnson refers to Morgan as “Sex Tape,” citing he “makes people famous.” This is, of course, in reference to the unconsented release of sensitive videos of Paige in real life. She fell out of WWE’s good graces and entered a long series of terrible headlines involving then-boyfriend and former WWE superstar Alberto Del Rio.

After dumping Del Rio and getting cleared from her injuries, Paige returned to WWE in glorious fashion only to be seriously injured again, this time calling for Paige to retire from in-ring professional wrestling competition at only 25 years old.

To the untrained eye, “Fighting with My Family” tells a heartwarming story of a young Brit’s success in a business not yet ready for women’s successes. But to anyone knowledgeable about Paige’s illustrious career, it delivers a watered-down generic version of a very attractive woman’s journey to WWE, basically just serving as a movie-length advertisement for the company.