National champs to pick, avoid in your bracket 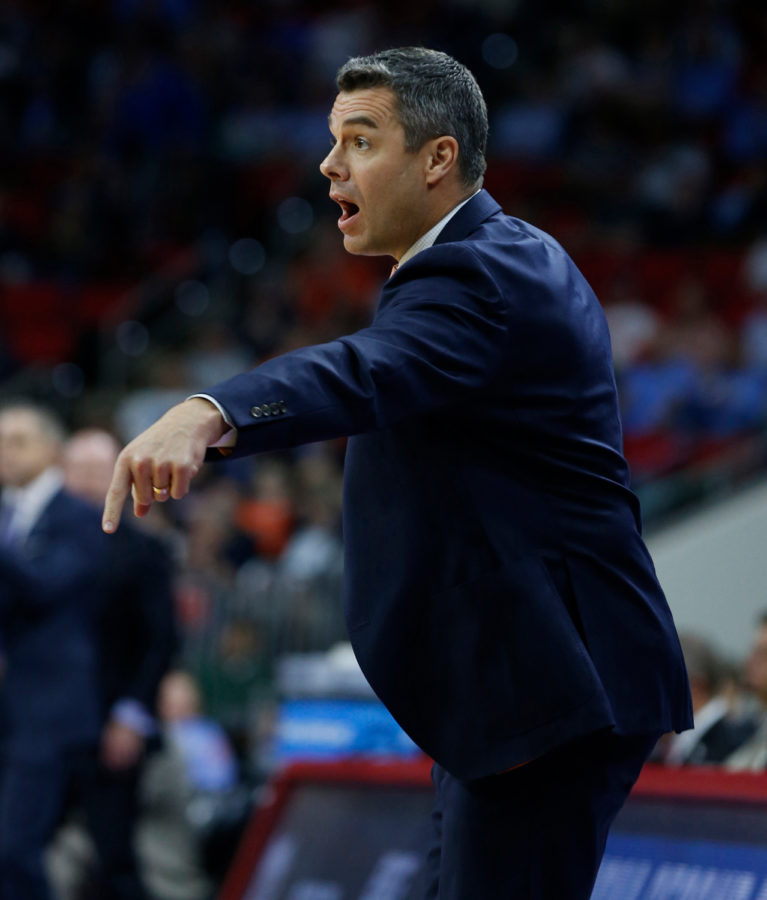 Virginia head coach Tony Bennett's Cavaliers enter this year's ACC Tournament as the No. 1 seed for the second straight season.

It’s almost that time of the year again — March Madness.

Still, it’s never too early to start looking for an edge that will push your bracket over the top. Diligent research in the weeks leading up to the tournament can be the difference between dominating your office pool and becoming the laughing stock at the water cooler when your predicted champion gets bounced before the Sweet 16. Getting the correct national champion is half the battle, so this column will look at which top teams are true contenders and which are mere pretenders.

Don’t pick an underdog to win it all

Last year’s first-round upset of No. 16 University of Maryland Baltimore County over No. 1 Virginia officially showed that anything is possible in the NCAA Tournament, and even the soundest predictive logic cannot be relied upon. March Madness is magical, heart-wrenching and unpredictable every single year, with teams like No. 11 Loyola-Chicago making the Final Four last year and No. 11 VCU accomplishing the same feat in 2011.

However, this sort of underdog magic only lasts so long. Cinderella stories like UMBC get eliminated in the next two rounds and neither Loyola-Chicago nor VCU made it to the final game. It’s incredibly difficult to beat five straight quality teams, and the final two teams left standing are almost always among the nation’s best.

The No. 3 seed is a safe cut-off point for narrowing down your championship matchup. Since 2001, 13 of the 18 national championships have pinned two top-three seeds against each other. Of the other five matchups, four still involved one top-three seed, with 2014’s contest between No. 7 UConn and No. 8 Kentucky being the lone exception. Even that game can’t be considered a battle of underdogs, as both were blue-blood programs with recent championship experience.

Since 1989, only two national champions have been higher than a No. 3 seed — No. 4 Arizona in 1997 and the aforementioned No. 7 UConn team. In conclusion, don’t waste your time picking a No. 4 seed or higher to win it all. We won’t know the official top 12 seeds until March 17, but we do know the top 12 teams right now as determined by the AP Poll and analyst Andy Katz’s early bracket. It’s unlikely that a significant contender will emerge between now and the end of the regular season, so the eventual national champion will almost certainly be one of these 12.

Can they win it all? No.

Do not let the Cavaliers fool you, as they fooled most of America — including Pitt quarterback Kenny Pickett — last season. Las Vegas might have them at 13/2 odds to win the National Championship, but I give them the same odds as Pitt basketball — 0 percent.

And like clockwork, they’ve been eliminated each season before the Final Four. Last year’s appearance was the peak of Virginia’s tournament woes, as the No. 1 Cavaliers were blown out by the No. 16 Retrievers for the first time in tournament history. So, what gives?

You’ll be telling your grandchildren about the time you watched 16-seed UMBC slay 1-seed Virginia. pic.twitter.com/RbDGIdrGoh

In essence, Virginia’s greatest strength — its pace of play — is also its biggest weakness. The Cavaliers slow every offensive possession to a crawl, and their organized defensive switches force opponents to hold the ball until late in the shot clock. This unconventional schtick gives them the ability to beat any team, but the low scoring margins also mean they can lose to anyone.

“But this year is different,” proponents of Virginia like to say. And like every year, this team is no different — the Cavaliers rank No. 352 out of 353 Division I teams in pace of play. That style of basketball is great for winning regular-season conference championships, but you need to be able to score the ball to win it all. Don’t waste your time picking Virginia as a national champ.

If you go back through the annals of NCAA Tournament finalists, you begin to realize that it’s roughly the same few names being listed over and over again. UConn, Duke, Kentucky, North Carolina, and more recently, Villanova and Michigan. In other words, it helps to have been there before.

No one has been there more than Duke head coach Mike Krzyzewski, who has led the Blue Devils since 1980 and has more career wins (1,124) and tournament wins (94) than any coach ever. Throw in the fact that Duke has the nation’s two best players in first-year phenoms Zion Williamson and RJ Barrett, and there’s a reason Duke is the favorite to win it all.

The biggest roadblock in Duke’s title bid will be Williamson’s health. He suffered a grade I knee sprain in a loss to UNC on Thursday, sparking a national debate about whether he should sit the remainder of the season to preserve his NBA paycheck. Williamson has made it clear he wants to play, and he should return by tourney time to give Duke the perfect blend of pedigree and young talent to win it all, similar to Kentucky in 2012 or Duke in 2015. Pick the Blue Devils to win your bracket confidently.

Can they win it all? No.

Like Virginia, Gonzaga is an annual lock to make the tournament — since head coach Mark Few took over in 1999, the Bulldogs have made it every single year. But also like Virginia, Gonzaga has struggled to make it deep into the postseason. Of those 19 tournament appearances, the Bulldogs have cracked the Sweet 16 just twice — an Elite Eight appearance in 2015 and a National Championship loss in 2017.

The Virginia comparisons should end there because Gonzaga is basically the anti-Virginia in terms of actual playing style. The Bulldogs score more points (90.7) than any team in the country and juniors Rui Hachimura and Brandon Clarke are both NBA-caliber players.

Maybe it’s because they play in the lackluster West Coast Conference, where each game is a glorified scrimmage. But the Bulldogs have shown they don’t have what it takes to win the big game. Pick them to make the Sweet 16, Elite Eight or even Final Four. Just don’t pick them to win it all, or you’ll regret it.

People often forget that Michigan made the championship game just last season, losing to Villanova. Well, they did, and head coach John Beilein’s eternally overlooked Wolverines are ready to go the distance again this time around.

In today’s age of one-and-dones, the Wolverines typically go against the grain by fielding a balanced team with seasoned veterans and first-year talent alike. On this year’s quintessential Michigan team, first-year German wunderkind Ignas Brazdeikis leads the team in points, but he’s surrounded by a veteran cast that includes senior Charles Matthews and juniors Zavier Simpson and Jon Teske. Along with sophomore Jordan Poole, who hit the biggest shot of last year’s tournament, this quintet has started all 28 games together, giving them an inherent chemistry that can’t be quantified.

Jordan Poole hits a three-pointer as time expires and Michigan beats Houston to advance to the Sweet 16. pic.twitter.com/KTZ9vfTgIn

Star point guards have a rich history of leading their team to the promised land in the tournament. Just ask Kemba Walker, who put Connecticut on his back in 2011, or Shabazz Napier, who did the same with the Huskies in 2014.

Things didn’t work out so well for the best guard in last year’s tournament — Trae Young and the Oklahoma Sooners didn’t make it past the first round. This season, Marquette junior Markus Howard is the spiritual successor to Young as a dynamic, shoot-first, must-see point guard. He ranks sixth in the nation with 25.3 points per game and has been known to explode for 30 or more points with consistency.

The difference between Young and Howard is that the latter has a greater supporting cast — brothers Sam and Joey Hauser provide a capable one-two punch that can keep the pressure off Howard when he goes cold. If Howard stays hot through the tournament, the Golden Eagles may have enough firepower to win it all and they could be a trendy pick if you’re willing to take a risk.

Others in the mix

As previously stated, March is ultimately the month of the blue bloods. And almost no program’s blood is bluer than Kentucky or UNC. John Calipari and Roy Williams have proven they’re two of the best coaches in the game, and they consistently have their teams performing at a high level come late March.

Williams’ Tar Heels score the second-most points per game nationally, and they have playmakers at every position. Graduate guard Cam Johnson — formerly of Pitt — is a lengthy, suave shooter. First-year point guard Coby White is lightning in a bottle, and senior forward Luke Maye, despite his Pillsbury-esque physical appearance, can stroke the ball from outside or bully opponents in the paint. Plus, several players remain from UNC’s 2017 and 2016 championship appearances. After Duke, UNC is the safest bet to win it all.

And Kentucky… is Kentucky. They reload with talent every year — sophomore forward PJ Washington is a force to be reckoned with — and typically peak at the right time, thus earning title consideration.

Texas Tech, like Marquette, is a sleeper pick for the more daring. The Red Raiders are red hot at the moment, having won five straight games including a 29-point blowout over perennial powerhouse Kansas. Their suffocating defense allows 57.3 points per game, which is second only to Virginia. They also have an immense talent at the guard position in 6-foot-6 sophomore Jarrett Culver, an intriguing prospect whose name has been rising on NBA draft boards. Throw all that in, and the Red Raiders have a fighting chance.

I’ll have to move Jarrett Culver up on my draft board….You just don’t see wings with this kind of passing instincts and vision every day.. https://t.co/a80W4rf6MJ pic.twitter.com/ww5qADhoGF

All these teams will inevitably make it into the national championship discussion at some point. But at the end of the day, they all lack that “it” factor that separates the great teams from the good teams. Tennessee and Purdue haven’t cracked the Sweet 16 in recent memory, and head coach Bill Self’s Jayhawks have underachieved by their lofty standards after entering as the preseason No. 1 team. Don’t be tricked into selecting any of these squads as your national champ.