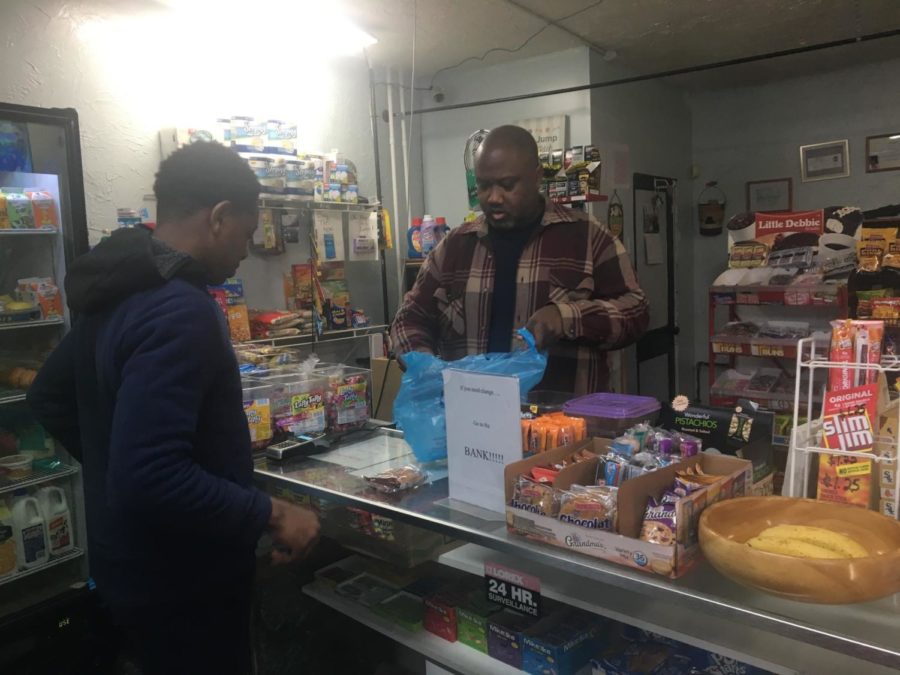 Carl Lewis bags a customer's purchase at his corner store.

Carl Lewis used to flip houses in Pittsburgh — but since opening Carl’s Cafe at 337 Fifth Ave. in 2012, he’s turned to flipping burgers.

Lewis is a black business owner who opened a cafe and corner store seven years ago in Rankin. His corner store has seen success, and his cafe, which is right next door, needed room to expand and will reopen this spring once renovations are complete.

“I had to adjust to what my customers wanted,” he said.

One thing his customers want is healthier food. So Carl partnered with Power Up, a program designed to bring produce and nutrition education to local stores. Through his time in Rankin, he’s tried to be a positive force in the community by listening to the needs of his neighbors. He started to become a part of the neighborhood and got to know his clients.

“I wasn’t sure at first if Rankin was a good fit,” he said. “But the people in the community missed having a store that they could walk to and get what the wanted.”

The people also enjoyed eating at Carl’s Cafe next door — so much that Lewis needed to renovate. It was working well in its previous setup, but due to increased demand, he has to hire some employees to staff the cafe.

And Rankin was close to seeing a large redevelopment earlier this year, when Amazon was considering Pittsburgh to house its second headquarters. Amazon eventually selected New York City and Washington, D.C., and later pulled out of New York City after residents and politicians protested the company’s arrival.

Lewis felt like Amazon could have been the boost Rankin needs today, but he knows the land is still there, ripe for redevelopment.

“The empty land in Rankin I was speaking of was where Amazon was going to put there second headquarters,” he said, saying that there’s still room to grow “the housing market, stores, restaurants and gas stations.”