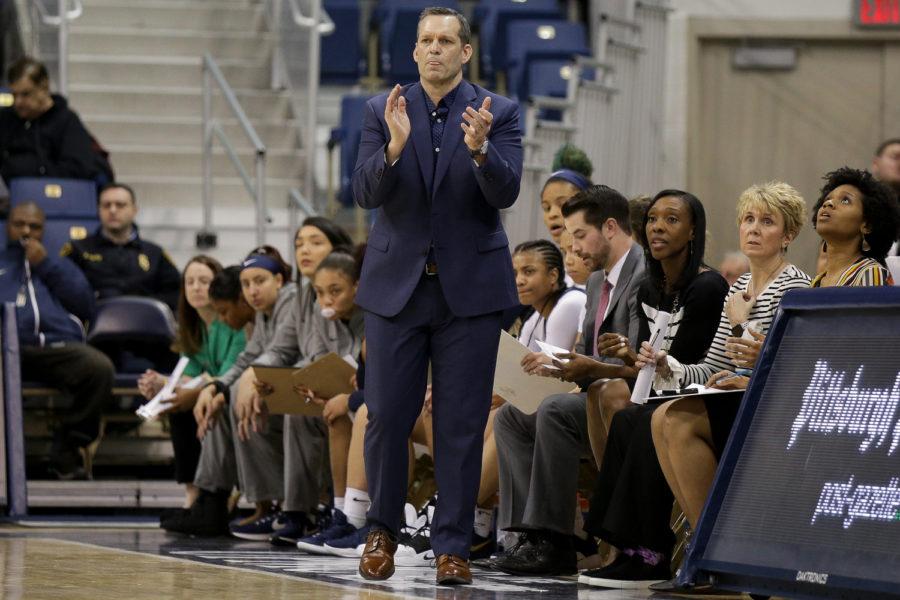 Women’s basketball head coach Lance White’s team currently sits near the bottom of the ACC in the No. 14 seed. The Panthers have won two of their 16 conference games.

Pitt women’s basketball travels to Greensboro, North Carolina, Wednesday for the 42nd annual Atlantic Coast Conference Women’s Basketball Tournament. This year’s bracket features all 15 ACC teams, with the Panthers’ 2-14 conference record (11-19 overall) netting them as the No. 14 seed spot for the second year in a row.

Last year’s tourney saw a Lady Panthers’ loss to a then-seeded No. 11 Wake Forest in the first round, 72-38. The devastating loss saw Pitt shooting an abysmal 15-for-54 field goals, for 27.8-percent shooting, compared to the Demon Deacons’ 50-percent success rate.

Losing in the first round isn’t something new for the Panthers.

Pitt women’s basketball hasn’t made it past the first round of the ACC tournament since 2016, when it defeated UNC in a thrilling overtime victory, 82-72. Big names missing from that team compared to today’s include forwards Brenna Wise and Yacine Diop, both big scoring assets. That year, the Panthers only ended with a 4-14 conference record, demonstrating that regular-season performance doesn’t necessarily define postseason play.

At that point in the season, Pitt had yet to notch a conference win, going into the contest with a 0-8 ACC record against Duke’s 2-7. The game was a declining effort on the Panthers’ part, with the first quarter being their highest scoring at 19, culminating in an overall field-goal ratio of 22-66 for the game.

Senior Cassidy Walsh nabbed six 3-pointers, but with only a 24.1-percent team success beyond the arc, Pitt just couldn’t make up the scoring deficit.

“We are a different team when Cassidy Walsh knocks down shots,” head coach Lance White said. “She had a couple open looks early on and she knocked them down to give the team some confidence and allow our other players to do what they do best, but we just couldn’t maintain that down the stretch today.”

Comparatively, Duke put up 26-61 field goals and 10-23 3-pointers, both above the 40-percent mark, edging out the Panthers simply with consistent scoring. The Blue Devils also claimed 22 points off turnovers, compared to the Panthers’ 17. Snagging both offensive and defensive rebounds still proves difficult for Pitt.

Pitt has lost all 10 of its meetings with Duke dating back to the 2006 season, so odds are not in the Panthers’ favor this tournament season.

Since the loss to Duke, Pitt has went 2-5 on the season, with its most recent defeat coming during senior recognition day Sunday against No. 3 Louisville, 67-40. The first quarter of the game proved pretty competitive at least, with the Panthers answering Louisville’s 15 points with 13 of their own. But Pitt couldn’t capitalize, not matching the same energy or scoring rate as early on in the game.

Pitt simply couldn’t keep up on the court with the Cardinals’ speed, allowing 21 points off turnovers and generally appearing sluggish compared to Louisville’s quick drives. This negative momentum doesn’t help Pitt’s chances of seeing the second round again, even with White’s optimism.

“We are a different basketball team than we were two months ago,” he said. “That is what I wanted, I wanted to be about growth and our kids have come to work every day and challenge each other and challenge me as their coach to keep finding ways for us to get better.”

With five seniors on the team, Pitt can hope to use its collective tournament experience to guide the younger portion of the team to victory in the conference, but not past the first round. Even though the Blue Devils dominated the Panthers in their last meetup, Duke has only won 4-7 of its games since then, leveling the momentum aspect of predicting a winner.

Last year, Duke made it to the quarterfinals of the ACC tournament before losing to NC State, 51-45, though its offense was led by then-redshirt seniors Lexie Brown and Rebecca Greenwell, putting up 16 and 13 points against the Wolfpack, respectively. Duke’s roster only boasts two seniors this year, so if Pitt can put its big scorers in against the young Blue Devils, it may be able to pull the upset.

Even if Pitt manages to fulfill the underdog prophecy in the first round, don’t expect the Panthers to make it past any top-10 teams this tournament season.