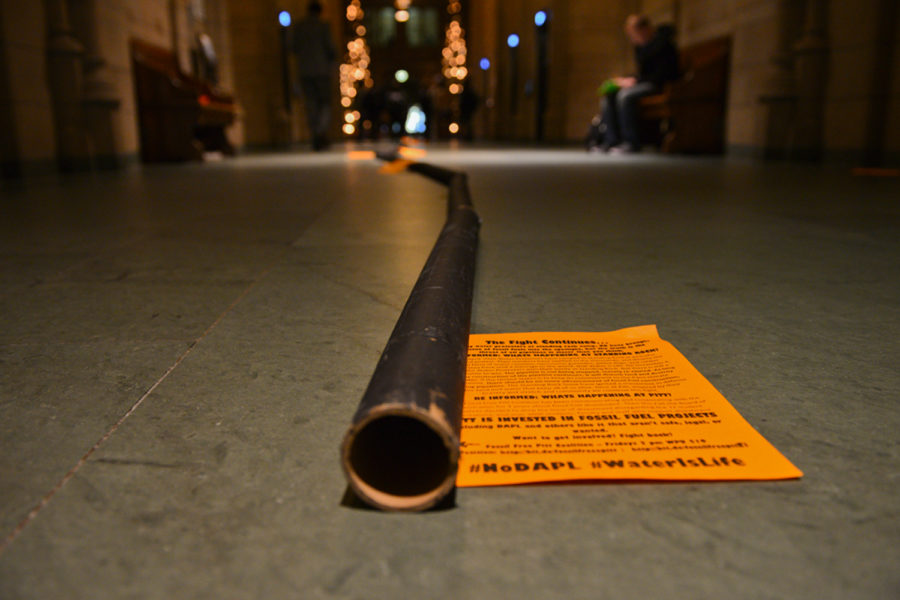 Members of the Fossil Free Pitt Coalition set up a cardboard “pipeline” in the Cathedral in December 2016 in protest of the pipeline on Standing Rock’s reservation.

Tuesday’s runoff election to determine Student Government Board’s executive vice president for the 2019-20 academic year will offer students the chance to show either their support or opposition for fossil-fuel divestment, an issue that student activists have called on the University to address for years.

The ballot students see on elections.pitt.edu from 8 a.m. to 8 p.m. Tuesday will feature a referendum question on whether or not the University should divest from fossil fuels.

SGB President Maggie Kennedy said the current board has discussed the concerns of the pro-divestment Fossil Free Pitt Coalition, a partnership that consists of more than 35 student organizations, with the administration.

But it’s Pitt’s Board of Trustees that ultimately decides where the University invests its money.

According to Kennedy, Chancellor Patrick Gallagher advised SGB to collect student opinion to demonstrate to the Board of Trustees that students truly want divestment — if that is what they want.

“We wouldn’t want to make a statement [to the Board of Trustees] that doesn’t represent, ideally, a majority of the student body,” Kennedy said.

She acknowledged that tomorrow’s runoff and referendum vote is unlikely to turn out a majority of the student body to vote. But it could still show how a significant portion of undergraduate students feel about divestment. About 18 percent of the student body voted in the presidential and board elections on Feb. 19.

The exact amount of money currently invested by the University in fossil fuels is unknown. Information released by the administration in 2016 showed that Pitt had $26 million invested in fossil fuels at that time, including approximately $8 million in coal companies and about $18 million in oil and natural gas companies — though that number may not account for other investments that indirectly contribute to fossil fuels.

Kennedy said board member Albert Tanjaya had the idea to pose the question to students at the time of the runoff election between Caroline Unger and Anaïs Peterson, who tied for the position of executive vice president in February’s SGB election.

“Since these are two large birds, we’re hoping we can get them both with one stone,” Kennedy said.