Editorial: Trump makes empty promise for “A Plus” emergency relief 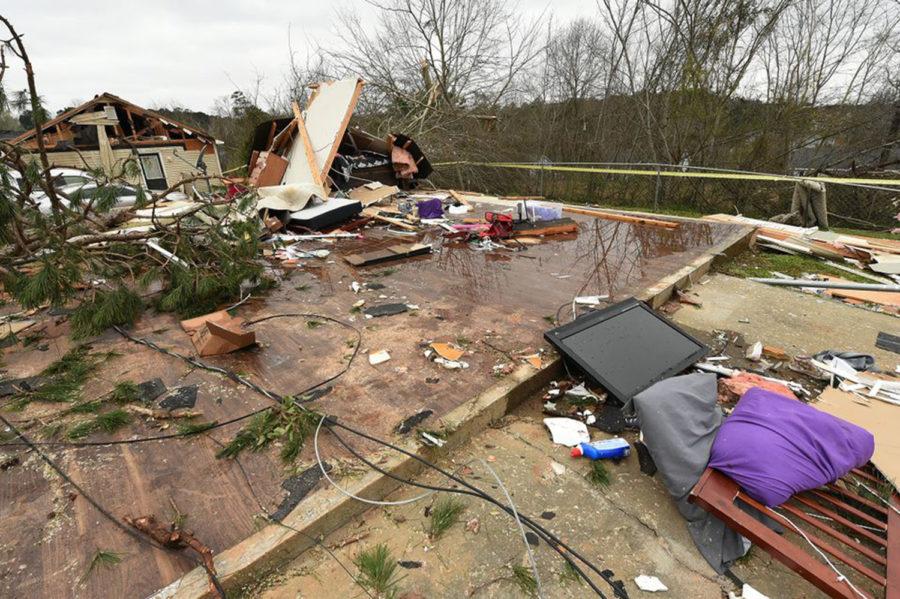 Tornado damage in Smiths Station, Alabama. Trump’s approach to the disaster in Alabama comes in stark contrast to his harmful rhetoric and actions toward other states that have experienced catastrophic natural disasters of their own.

President Donald Trump took to Twitter Monday in the aftermath of deadly tornadoes in Alabama that ripped through the state and killed 23 people.

“FEMA has been told directly by me to give the A Plus treatment to the Great State of Alabama and the wonderful people who have been so devastated by the Tornadoes,” he tweeted.

The tornadoes in Alabama warrant a fully committed response from FEMA. Fatalities are up to 23 people and at least seven remain missing while dozens more were injured. But Trump’s approach to the disaster in Alabama comes in stark contrast to his harmful rhetoric and actions toward other states that have experienced similarly catastrophic natural disasters. Trump’s inconsistency in responding to disaster relief is unacceptable, and future disaster-affected states deserve the same support he has given Alabama.

After hurricanes Irma and Maria swept through the Caribbean, Puerto Rico’s death toll rose to nearly 3,000, many of Puerto Rico’s 3.4 million residents were unable to access clean water and hospitals were struggling to replenish medical supplies. Instead of fully committing disaster relief efforts, Trump chose to blame Puerto Rico for its own crisis, claiming its infrastructure was in shambles before the hurricane even hit.

When San Juan Mayor Carmen Yulin Cruz leveled criticism at the hobbled federal response on the island, Trump accused her and other local leaders of poor leadership and wanting “everything to be done for them.”

And Trump’s response to emergencies in mainland states like California, which in 2018 experienced the deadliest wildfire season in California history, was certainly not “A plus.” Most notably, the Camp Fire killed 85 people, burned 153,000 acres and destroyed almost 14,000 homes. The town of Paradise was almost entirely destroyed.

Instead of promising “A Plus” FEMA treatment, Trump threatened to cut off federal emergency aid to California after accusing the state of mismanaging its forests.

“There is no reason for these massive, deadly and costly forest fires in California except that forest management is so poor. Billions of dollars are given each year, with so many lives lost, all because of gross mismanagement of the forests,” he tweeted. “Remedy now, or no more Fed payments!”

But experts overwhelmingly agree that the California wildfire season was not tied to forest mismanagement. Instead, the wildfires were fueled by high wind and dry, hot conditions made worse by climate change.

Not only did Trump misrepresent how and where wildfires start, he also drew fire from the president of the California Professional Firefighters who called the tweet an attack on those at the frontlines of battling the wildfires.

“The President’s message attacking California and threatening to withhold aid to the victims of the cataclysmic fires is ill-informed, ill-timed and demeaning to those who are suffering as well as the men and women on the front lines,” Brian K. Rice said to CNN.

When natural disasters place the lives of Americans at risk, relief efforts are no place for political sparring and showmanship. Trump promised Alabama the best federal efforts had to offer and rightfully so. His willingness to withhold that kind of support in past deadly situations elsewhere is disgraceful.