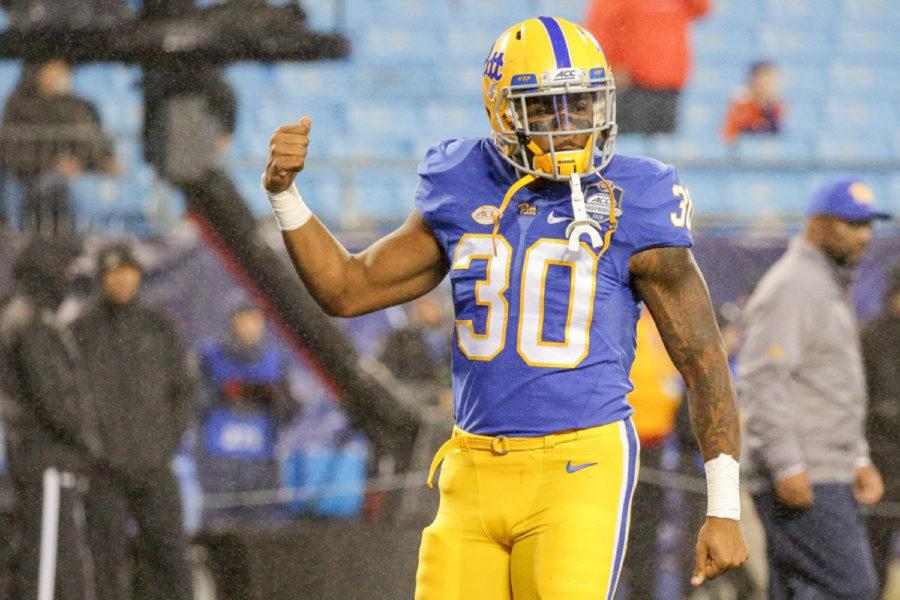 Former Pitt running back Qadree Ollison was the only Pitt player to attend this year’s combine.

The NFL Scouting Combine — a glorified job interview for college football players looking to improve their stock for the draft in April — began last Friday in Indianapolis and concluded on Monday. Let’s take a look at the standouts, draft implications and how Pitt’s lone representative fared against the competition.

Defensive linemen posted some of the strongest numbers seen from that position group in recent years. Alabama defensive tackle Quinnen Williams, universally considered a top-five draft pick, posted the fourth fastest 40-yard dash time of any player more than 300 pounds since 2006, clocking in at 4.83 seconds. Williams’ raw speed, as well as the burst he showed in the first 10 yards of his dash, will keep him from slipping outside the top five of what is shaping up to be a crowded draft class at the top.

Mississippi State edge defender Montez Sweat also boasted an impressive amount of athleticism, setting the modern (since 2003) record among defensive linemen with a 4.41 time in the 40-yard dash. That’s especially impressive when you consider Sweat is 6-foot-6, 260 pounds. Toss in Sweat’s top-five rankings in his position group in agility drills like the three-cone drill and 20-yard shuttle, and Sweat likely boosted his stock from the mid-first round into the top 10, with NFL.com’s Daniel Jeremiah predicting the Buccaneers to take him at No. 5.

Coming into this year’s combine, there was one quarterback whose measurables were of specific interest to the NFL Draft community — 2018 Heisman winner Kyler Murray, the baseball phenom who elected to play football despite being a top-10 pick in the MLB. Murray’s diminutive stature (various sources had him listed anywhere between 5-foot-8 and 5-foot-11) and hand size had pundits worried about his ability to succeed at the next level.

He may have put some of those concerns to bed over the weekend, with his hands measuring well over the NFL standard of nine inches and his height surprising some people, standing just an eighth of an inch over 5-foot-10. After these reports, buzz began to generate that Murray could be the No. 1 overall pick by the Arizona Cardinals and head coach Kliff Kingsbury. Jeremiah agrees, putting Murray as the first pick in his first post-combine mock draft.

Is Metcalf as dominant as most think?

The short answer is yes, but there could be more to the story. Former Ole Miss wide receiver D. K. Metcalf had a downright dominant performance in almost every way at the combine. The 6-foot-3, 228-pound wideout tied for the lead in the bench press, lifting 27 reps of 225 pounds. He then blew scouts away with a 40-yard dash time of 4.33 seconds — nearly unheard of for a player his size — and top-five finishes in the vertical jump and broad jump.

If there was one hiccup in Metcalf’s performance, it was in his ability to show agility. The three-cone drill, a standard gauge of a wide receiver’s ability to get out of cuts when running routes, can tell teams a lot. Metcalf didn’t fare so well in this test of quickness, finishing with a time of 7.38 seconds that was third-worst among wide receivers.

Without a doubt, Metcalf is an athletic freak who had a strong day in all the most popular drills that fans love to look at when checking in on players drafted by their teams. Just two seasons ago, the Cincinnati Bengals drafted wide receiver John Ross after he ran the fastest 40 in combine history. But Ross only had 21 catches in his first two seasons.

Former Pitt running back Qadree Ollison was the only Panther invited to this year’s combine. Ollison put up respectable numbers in the 40-yard dash, his best time coming as an official 4.58. Given his large size, this wasn’t a poor showing — for comparison, former teammate and current Steelers running back James Conner ran a slightly slower 4.65. Ollison’s showings in the three-cone drill and broad jump, however, did not help his draft stock, as he finished dead last in both.

Ollison will likely have a tough time getting drafted, especially in a draft that is loaded with talent at the running back position. But it remains likely that he’ll find his way to an NFL training camp as an undrafted free agent, and could fight his way onto a roster or practice squad if he can carve out a role as a power back.

Though it may seem silly to put so much weight on a bunch of odd drills that often don’t even involve a football, the combine is the biggest day in the lives of many NFL prospects. Players who will get drafted regardless can make their stock soar higher, while some players must earn the right to be drafted by catching a team’s eye on the field or finding their way into a team’s heart in the interview room.

A slip-up at the combine could be the most expensive mistake these players ever make — just ask former Florida defensive lineman Jachai Polite. Originally a top-20 prospect, Polite is reportedly slipping down draft boards due to poor results on the field and in interview rooms at the combine. First, Polite ran the 40-yard dash in 4.84 seconds, third-worst in his position group. Then, he grouched about teams giving him a hard time in interviews about his flaws as a player, which is standard procedure. Polite capped it off by admitting that he’s never watched film of himself and sees his talent as more natural, raising questions about his coachability.

Was poor in the interview. I asked him about something I saw on film. Stunned when he told me he’s never watched film of himself. He looked bewildered. pic.twitter.com/bZLGvbJkdo

Per Spotrac, a fall from 15th overall to 33rd overall is a loss of roughly $7 million in total contract value. At the end of the day, the combine really is the most important job interview of a player’s life — if they’re lucky enough to even get an invite.