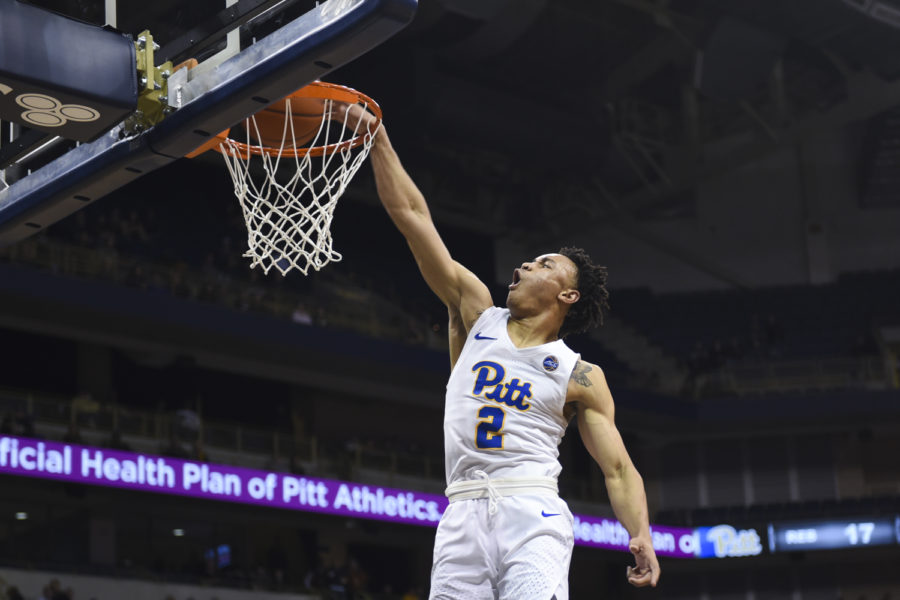 It was an emotional and cathartic Saturday afternoon in Pittsburgh as Pitt men’s basketball, losers of 13 in a row, beat Notre Dame 56-53 on senior day to clinch a non-last place finish in the ACC. While the Panthers’ three seniors started the game, their young stars came up clutch down the stretch as the team pulled out its third ACC win in ugly, gutty fashion.

Pregame, senior guards Jared Wilson-Frame, Joe Mascaro and graduate transfer Sidy N’Dir were honored by the program and the home fans. Mascaro, a walk-on and the Panthers’ longest tenured player, was given the start alongside N’Dir and Wilson-Frame. Head coach Jeff Capel praised his seniors, particularly Mascaro.

“[The seniors] have meant a lot to our program.” Capel said. “Joey [Mascaro] has been here the longest and to me he is the epitome of this city. He’s tough, he’s hard-nosed, he’s gritty and he’s very passionate about this team and this city and this program.”

Capel didn’t forget to praise his veterans, Wilson-Frame and N’Dir.

“Sidy is a guy who wanted an opportunity to play at the highest level,” Capel said. “And it was really good too see him finally make some shots… Jared is a guy who believed right away when I got the job. When there was a lot of uncertainty in the program, he was certain in his beliefs in me, us, the future and the direction… I wish his two years here had been better”

From the opening tip, it was obvious that the Irish and Panthers were among the ACC’s bottom teams. They entered the afternoon shooting 42 and 39 percent from the field, respectively, and were ice cold to start, combining to miss their first 10 shots before first-year forward Au’Diese Toney opened scoring with a foul line jumper.

The Irish were quick with their response, embarking on a 7-0 run to the first media timeout. After finding a rhythm, both teams began to find their strokes. Wilson-Frame hit the first of his four 3-point baskets less than five minutes in to halt the Irish run.

Notre Dame, despite being a poor 3-point shooting team this season at only 31 percent, could only find offense from behind the arc. 3-pointers from first-year guards Prentiss Hubbs, Nate Laszewski and junior guard TJ Gibbs gave the Irish a 20-10 lead with 9:01 remaining.

Despite some hot shooting from distance, the first half saw both teams shoot only 33 percent from the field. However, the final minute saw a barrage of baskets from Pitt. First-year guard Trey McGowens’ threw down a ferocious and-one dunk over junior forward John Mooney, then hit a long 3-pointer with 12 seconds left to send Pitt into the halftime locker room down only one.

McGowens, who did not score until the 5:20 mark of the first half, was ignited by his electric final minute. He opened up the second half with a driving layup that gave Pitt its first lead since the 17-minute mark of the first half. Wilson-Frame then found the bottom of the net on a 3-pointer and gave the Panthers a four-point lead.

Notre Dame quickly countered with back-to-back buckets and took a 33-30 lead with just over two minutes having passed in the second period.

The Irish burst, however, did nothing to stop McGowens, who used the old fashioned 3-point play to tie the game at 33. On the ensuing possession, junior forward Kene Chukwuka cleaned up a Panther miss with an offensive rebound and putback. His layup sparked a 13-2 run for Pitt, who took a 45-35 lead with just under 11 minutes left to play.

“We were hungrier,” Wilson-Frame said. “We wanted it a lot more than we have in a long time… When we were on a good track and winning games and even big games in the ACC that was something we held ourselves to… We did that today. We were the hungrier team and it shows.”

Laszewski finally got hot for Notre Dame, draining 3-pointers on three of four  possessions to cut Pitt’s lead down to one by the two-minute mark.

With one minute on the clock and Pitt clinging to a one-point lead, Johnson was fouled by Mooney and made one of two free throws. On the following possession for Notre Dame, junior guard TJ Gibbs — younger brother of former Pitt standout Ashton Gibbs, who was sitting courtside — was fouled going for a loose ball.

Gibbs missed the front end of the one-and-one and Toney gathered the rebound and fired an outlet pass to Johnson, who was promptly fouled and went to the line with 27 seconds left. Johnson again made one of two from the charity stripe to put Pitt up by three.

Notre Dame squandered yet another possession, as Mooney was stripped by McGowens, who went to the line with a chance to ice the game but missed the front end of the one-and-one. Notre Dame elected not to use their last timeout, but couldn’t get a clean shot off. Hubbs’ desperation 3-pointer fell wide right and the Panthers survived.

“It wasn’t pretty,” Capel said. “But it was beautiful for us in the end.”

For the Irish, Laszewski was outstanding, leading the contest with 23 points behind the strength of six 3-point baskets. Dane Goodwin was the only other Irish player to finish in double digits, with 10 points and six rebounds.

The Panthers and Irish closed the regular season with identical 13-18 overall records and await their seeding and matchups for the ACC tournament in Charlotte, North Carolina beginning next week.