Panthers prevail in first round of ACC Tournament, 80-70 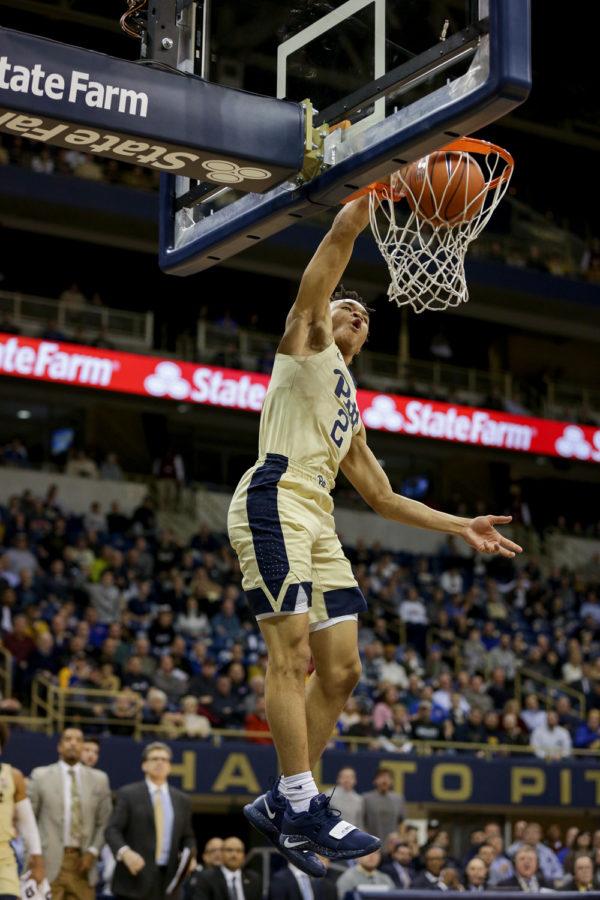 Pitt men’s basketball and its duo of first-year stars opened the 2019 ACC Tournament in dominating fashion, beating Boston College 80-70 Tuesday night in Charlotte, North Carolina. After a lethargic first few minutes, the Panthers’ offense — sparked by first-year guards Trey McGowens and Xavier Johnson — turned in its most impressive showing since the beginning of conference play in January.

The first four minutes couldn’t have gone worse for Pitt. By the first media timeout, the Panthers had turned the ball over three times and scored only two points, finding themselves in a seven-point hole with less than five minutes gone in the first half.

Following the media timeout, head coach Jeff Capel’s bench sparked the Panthers. Graduate guard Sidy N’Dir dove for a loose ball to regain possession and scored layups on consecutive possessions, including a converted 3-point play to steady the game at 9-7 in favor of the Eagles.

The Panthers also stepped up their defensive intensity following the sluggish start. Junior forward Nik Popovic nailed a baseline jumper to put the Eagles up by three with 9:19 remaining, but that would be BC’s last field goal make for the rest of the half.

Pitt closed the half on a 23-5 run fueled by some hot shooting from the Panthers and sloppy offense from the Eagles. The Panthers made three 3-pointers seven of eight free throws to close the half. Meanwhile, Boston College committed five turnovers during the same stretch, which helped facilitate Pitt’s strong transition scoring.

Pitt entered the half leading by 15 on the strength of its defense, a calling card for the young Panthers even through their 13-game losing streak earlier this season. They held Boston College to 25 percent shooting from the floor and 18 percent on 3-pointers in the first half.

The Panthers also showed a skill that was sorely missed throughout the regular season — the ability to open and close halves well.

Pitt scored points on 11 of its first 13 possessions in the second half and led by as much as 27 points. The Eagles simply couldn’t up keep up with the kind of offensive firepower the Panthers brought.

With 11:30 left to play, the Eagles began to show some fight. Popovic scored seven points as part of a 14-1 run that trimmed the Panther lead to 14 with just over eight minutes remaining, but it was short lived as Pitt scored on three straight possessions to push the difference back to 21.

The Eagles continued to hang tough. For the next five minutes they chipped away at a seemingly insurmountable deficit, cutting it to single digits with just under one minute left to play, but it was too little too late.

Despite making their last field goal with 2:28 left in the game, the Panthers kept Boston College at arm’s length. Pitt dribbled out the clock and racked up free throws en route to its first ACC tournament win since 2017, when they edged Georgia Tech 61-59.

In a game that was headlined by two outstanding backcourts, it was Pitt’s young stars who prevailed over Boston College’s experience. Johnson finished with 23 points, four rebounds and two assists and classmate McGowens tallied 26 points on 7-14 shooting from the field, 2-2 from distance and 10-12 from the free throw line. Senior guard Jared Wilson-Frame fell one rebound short of a double-double, but still managed 16 points and 9 boards.

For the Eagles, Popovic was a bright spot in an otherwise poor offensive showing. The 6-foot-11 native of Bosnia and Herzegovina scored an efficient 21 points and collected nine rebounds. Bowman, in what many believe to be his final college game, finished with 14 points, seven rebounds and four assists. Senior guard Jordan Chatman was the only other Eagle to score in double figures, recording 16 points, 10 of which came at the free throw line

For Boston College, a disappointing season comes to a close, as the Eagles finished 14-17 overall and 5-14 in the conference. For all the challenges this season provided, the offseason will offer no refuge. They’ll have to contend with the departure of two of their top five scorers, as well as rumors surrounding the job security of head coach Jim Christian.

The Panthers, however, are trending up. Playing with obvious confidence for the first time in months, the Panthers will try their luck for a third time against the Syracuse Orange, who defeated Pitt twice during the regular season, Wednesday night in Charlotte. Tip-off is scheduled for 9 p.m.