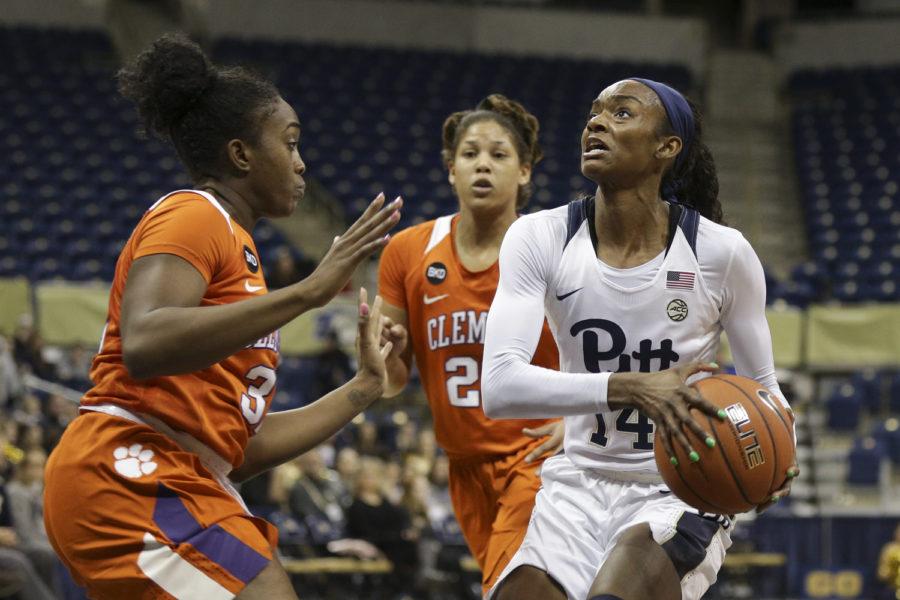 By Laura Sosovicka, For The Pitt News

The Pitt women’s basketball team witnessed a season of ups and downs in 2018-19. In April 2019, Lance White replaced Suzie McConnell-Serio as head coach. While both coaches had similar records and conference wins, White still seems to have positively impacted the team in his first year. The Panthers saw major setbacks when senior guard Aysia Bugg and junior Alayna Gribble found their way to injured reserve. Bugg was diagnosed with blood clots and Gribble struggled with concussions.

Without two of their prominent players, the team lacked rhythm, which brought massive struggles during the second half of the season when conference play started. These setbacks provided obstacles that the Panthers could not overcome as they finished the season in 14th place in the ACC Division.

While most of the season was a struggle, there were some bright spots to it. These are the top 10 moments of the women’s season.

NOLA Edged Out at the Pete

The Panthers received their first win at home this season when they hosted the New Orleans Privateers. This was Pitt’s first time playing the Privateers and the first win for White. Prominent figures included Cassidy Walsh, Gribble, Danielle Garven and Kyla Nelson — all four scored points in the double-digits. The Panthers started the game hot, making the score 50-18 heading into halftime. Gribble and Walsh were the top two scorers of the game — Walsh scored 21 and Gribble scored 17. Pitt topped the Privateers in rebounds, assists, steals and blocks for a 90-38 win.

Bugg exceeded limits offensively with 23 points, making her the top player when Pitt faced the Cincinnati Bears at home. Her performance motivated Walsh, who scored 14 points, and Garven, who scored 13 points. Additionally, sophomore Cara Judkins reached a career-high 13 rebounds within 25 minutes. The Panthers led in field goals (25-19), 3-pointers (6-2), free throws (9-8), rebounds (48-31) and blocks (4-3) over the Bears. Gribble showed her skill for 3-pointers in the second half, giving Pitt the victory. An 8-0 run into the fourth quarter launched the Panthers ahead of the Bears, ending the game with a score of 65-48.

The Panthers rattled the court on the final night of the Robin Tournament by snatching a win against Tennessee State, helping Pitt improve to 4-4 overall while leaving Tennessee at 0-7. Despite teammates Bugg and Gribble’s absences, the ladies regrouped and stood firm in keeping their winning streak alive. The team’s performance mirrored the previous night when they beat Arkansas 61-54. White was pleased with the team and their spark of energy as the Panthers outscored the Tigers 18-8 at the end of the first quarter. The first half wrapped up with the Panthers heading the score 41-21. They set the bar higher with a score of 61-38 in the third and created a 25-point lead with seven minutes remaining in the game. The Panthers defeated the Tigers at 78-56. An invitation was extended to senior Garven to join the All-Tournament Team. Garven obtained a 44-point total in the tournament and 17 points versus Tennessee.

The Panthers clinched their fourth straight win against Fordham University and ranked (6-4) overall for the first time this season. Jasmine Whitney led the team with an impressive season best of 18 points in scoring. Garven followed with 16 points while senior forward Kauai Bradley brought in 13 points. The game was a nail-biter as the Panthers were behind the Rams by one with two minutes left. Pitt called a timeout and plotted a different approach, resulting in Whitney’s layup and two free throws. This put the Panthers ahead of the Rams with a close score of 65-62.

The Panthers took everyone by surprise against the UNCW Seahawks as they clawed their way to victory. Judkins dunked a personal-best 16 points with seven rebounds and three blocks. Walsh raked in 15-points, a career-high eight rebounds and five assists. Down by eight with seven minutes left, the Seahawks forced the Panthers to strengthen their game strategies. Garven and Judkins drilled in threes to give the Panthers a 16-12 lead over the Seahawks. The ladies dominated the rest of the game with a multitude of shots over UNCW. The Panthers established their most memorable catch-up win of the season, considering they were lagging behind by 13 points at one point in the game.

The Pittsburgh Panthers owned the court and cut their losing streak against their rival, the Duquesne Dukes, for the first time since 2013. This win featured significant accomplishments including the Panthers turning 12 Dukes turnovers into 12 points of their own. Whitney earned herself 23 points, marking the first time this season a player scored more than 20 points in two straight games. Walsh shot 14 points and Judkins reached her career-first double points with 10. The third quarter ended on a sour note for the Panthers with Duquesne leading 43-34, but Whitney and Walsh answered by tying up the game, 48-48. Walsh powered through two 3-pointers which set the Panthers in the lead. The game ended with a score of 66-58 and put the Panthers at (9-5) overall.

At the Petersen Events Center, the Panthers entered the first half against the Clemson Tigers looking for blood and victory. Bradley broke three scoreless minutes with a triple while Walsh forced a 10-2 run for the Tigers in the first quarter. The defense was strong during the second quarter as the Tigers suffered 11 turnovers, where Pitt grasped the lead 33-28 at the half. The Panthers made every effort to control the game, but the Tigers caught up and took over. Clemson defeated Pitt with a score of 65-59. Enduring a hard loss also brought another upside — Bradley earned a career-high 17 points in the game.

Even though they lost to the Miami Hurricanes, the Panthers can say they lost admirably. Hosting the 12th annual Pink the Petersen event in honor of Breast Cancer Awareness, the stands and court were flooded with a sea of fans and players decked out in pink. The ladies wore pink jerseys and handed out pink T-shirts to the 2,495 fans who showed up for the annual event. The profits from tickets sold were donated to Susan G. Komen Pittsburgh. Garven led the Panthers with 13 points across the span of 29 minutes of play. Overall, the ladies struggled offensively for the duration of the game and fell to Miami with a score of 65-51.

Taking Down the Tar Heels

White can proudly say he gained another notch on his belt as first-time head coach for the Panthers when his team went head-to-head against the North Carolina Tar Heels. The team grabbed its first home ACC victory since January 2018 and White’s first as head coach. Garven gathered 27 points while Walsh followed with a total of 22 points. Pitt’s 91 points marked its highest since joining the ACC back in 2013 and its best score since 2014. The Panthers triumphed over the Tar Heels 91-78.

How about we do it again on Sunday⁉️#TogetherWe | #H2P pic.twitter.com/TYsHI1X50G

WBB Give Us Another Reason to Love Them

A touching moment of this season was when the Women’s Basketball team visited cancer patients at UPMC Magee-Womens Hospital in February as part of their annual tradition prior to the Pink the Pete game. The ladies of the group handed out free tickets and pink hats to the patients. Many patients were Pitt alumni and the Panther’s trip was a reminder to anyone watching just how close-knit the Pittsburgh community is.