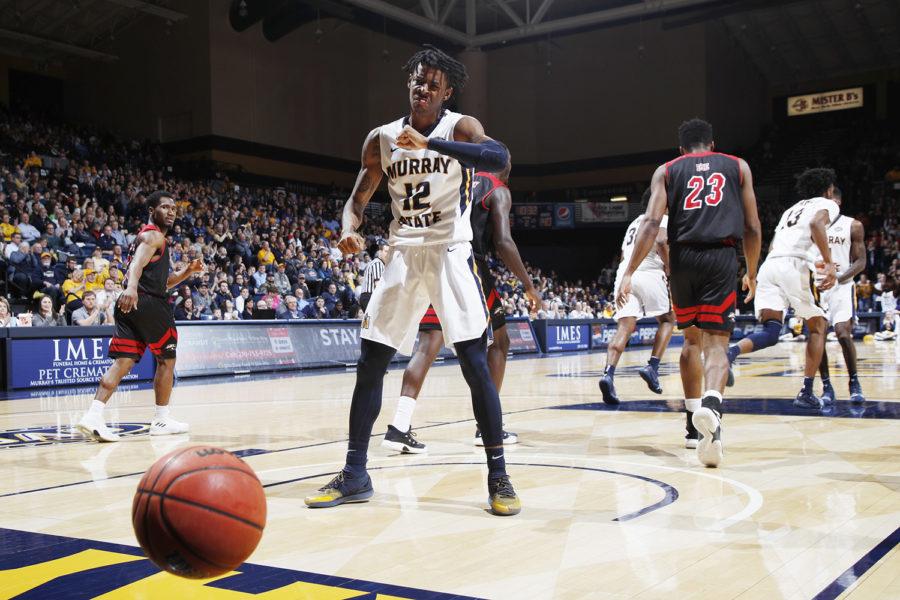 Ja Morant (12) of the Murray State Racers reacts after tipping in a shot in the second half against the SIU-Edwardsville Cougars at CFSB Center on Feb. 9 in Murray, Kentucky. Murray State won 86-55.

With the 2019 NCAA Division I Men’s Basketball Tournament bracket officially released, it’s time to start parsing through the opening matchups to look for the best entertainment value. The seeding system ensures that the best teams won’t face each other until later in the tournament, but the first round still offers plenty of excitement in the form of upset potential, talented players and unique team identities. Let the Madness begin.

Where: XL Center in Hartford, Connecticut

The tournament selection committee just couldn’t help itself. With Ohio Valley Conference champion Murray State earning an automatic bid and once highly seeded Marquette floundering down the stretch, the opportunity to create this 12-5 matchup was something the committee couldn’t pass up.

That’s because fans will get the chance to see the tournament’s top two scorers — Marquette junior guard Markus Howard and Murray State sophomore guard Ja Morant — face off in a battle of pure offensive firepower. Howard leads all tournament players with 25 points per game, while Morant isn’t far behind at 24.6 points per game.

The two get their buckets in different ways. Howard, at 5-foot-11, is the prototypical modern point guard, eschewing shots close to the basket in favor of 3-pointers. On the season, he attempts about as many shots from beyond the arc (8.6) as he does from within it (8.8). The strategy pays off — he shoots a slick 40.8 percent on 3-pointers and had 10 games of 30 or more points, including three games of 45 or more points.

Morant, on the other hand, is from an older school of play that prioritizes power over finesse. He’s an average 3-point shooter at 33.6 percent, but his sheer physical dominance caused him to rise rapidly up NBA draft boards throughout the season, with most projections considering him a lottery pick. The 6-foot-3 Morant terrorized Ohio Valley Conference foes all season long, racking up highlight-reel dunks while also leading the nation in assists at 10 per game.

Combined with the fact that neither team is elite on the defensive end — Murray State ranks 77th in the country, allowing 67.8 points per game, while Marquette is 120th at 69.1 — this game should be a fast-paced frenzy of buckets, making it a must-watch event for basketball fans. Clear your schedule for Thursday afternoon.

The Wofford Terriers enter March as the hottest team in the tournament, having won 20 straight games with their last loss coming Dec. 19. Neither their school name nor mascot necessarily instill a sense of fear, but make no mistake — these Terriers are not to be trifled with.

Wofford has fully embraced the post-Curry era of basketball. The Terriers rank sixth in the nation in 3-pointers attempted at 10.9 per game, and convert them at a second-best rate of 41.6 percent. Senior guard Fletcher Magee perfectly embodies Wofford’s style — his 4.6 3-pointers per game leads the nation, and he knocks them down at a hyper efficient 42.8 percent clip. One of the most prolific 3-point shooters in college basketball history, Magee has a JJ Redick-esque knack for curling around screens and putting quality shots up in a hurry.

Yes, the Terriers come from the pedestrian Southern Conference. They haven’t exactly played the best competition — their best win was over UNC Greensboro — and they didn’t stay within single digits of any ranked team they faced. But this is Wofford’s chance to instill some pride in the conference. Never before has a Southern Conference team been granted such a high seed in the Big Dance.

Seton Hall is a perfectly formidable opponent, having notched wins over top-ranked teams like Kentucky, Villanova and Marquette. In all likelihood, they should be favored to beat Wofford despite being the lesser seed. But the story to watch in this one is a small school from a small conference looking to make the selection committee proud for taking a chance on them. Dog mascots fared well in the tournament last year (ahem, UMBC Retrievers). This March, it could be Terrier time.

Someone in Wisconsin’s program must’ve made an enemy of someone on the selection committee. Typically, the 12-5 matchup features an established big-conference team matched up against a weaker-conference foe. This holds true for the three other matchups in this year’s tournament, with 12 seeds like Murray State, New Mexico State and Liberty. So imagine the dismay at Wisconsin’s watch party when the Badgers found out they had to take on the Pac-12 champion Oregon Ducks.

Okay, so it was a historically bad year for the Pac-12 conference. They placed no teams in the top 25 at season’s end, with only Washington coming close. Oregon rose from the scrum to win the conference tournament as the No. 6 seed, saving its season to earn an automatic bid in the tournament.

The Ducks’ season was nothing to write home about — they stumbled into mediocrity after losing star first-year center Bol Bol in mid-December. But this is an established program, one that made the Final Four just two seasons ago. They have one of the greatest coaches in Pac-12 history in Dana Altman, and they finished the season red-hot, winning their final eight games.

That’s why it’s such a shocker that the committee would give Oregon a 12-seed and put them up against a consistently great Wisconsin team. It’s a lose-lose for both teams because they shouldn’t have to face such a quality opponent so soon. But it’s a win for the fans because we get a matchup with second-round caliber talent in the very first round.

Wisconsin senior Ethan Happ (17.5 points per game, 10.1 rebounds per game and 4.6 assists per game) headlines the individual players in this matchup, and he’ll look to finish his illustrious college career on a high note by willing his team to victory. His game is old school and consists almost solely of post-ups, baseline spin moves and reverse layups. But if the Ducks keep the game close, they won’t have to worry about defending Happ in crunch time — his awful free-throw shooting (46.5 percent) makes him a liability for head coach Greg Gard in late-game situations.