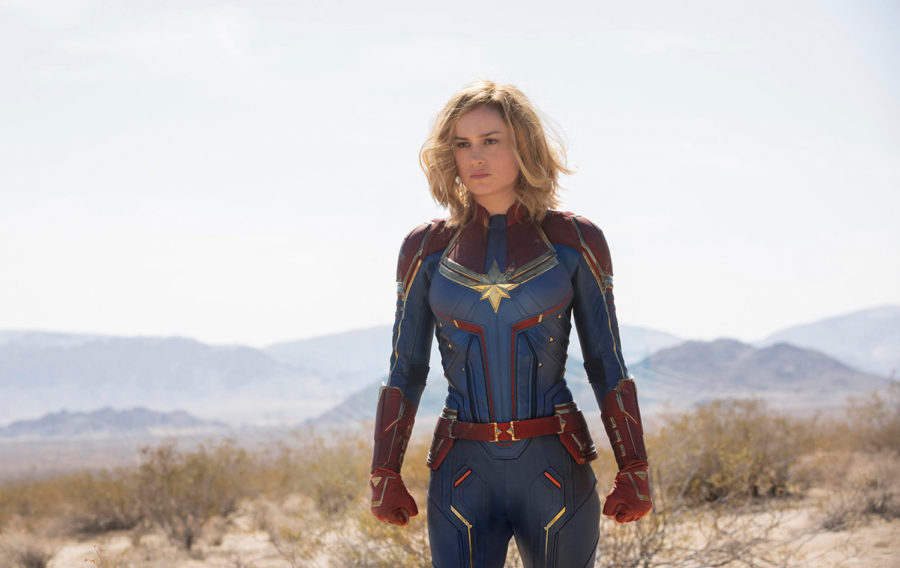 Brie Larson stars as the lead role in “Captain Marvel.”

In a world full of blockbuster superhero films, very few feature strong or developed female heroes. Rarer still are superhero movies with female leads that are financially successful and well-received. “Captain Marvel” soars higher, further and faster with strong and enjoyable characters, an engaging story and themes of empowerment. While it may feel too packed at times, the rest of the movie makes up for it.

“Captain Marvel,” written and directed by Anna Boden and Ryan Fleck, is the 21st movie in the Marvel Cinematic Universe and the first to feature a solo female lead — one with no romantic interest to boot. The film opened on March 8 — International Women’s Day — and on its first weekend grossed $456 million worldwide, which made it the sixth-biggest global debut of all time. As of Sunday, it has grossed $760 million and is now the highest-grossing film of 2019.

Set in 1995, the film follows amnesiac pilot Carol Danvers (Brie Larson), who has served in the middle of a galactic war waged by one race of alien, the Kree, against the Skrulls — another race of alien that has the ability to shapeshift into anyone and simulate their memories. Danvers, under the alias “Vers” and believing herself to be Kree, possesses incredible powers, including the ability to shoot photon blasts from her hands. Her commander, Kree soldier Yon-Rogg (Jude Law), trains her to control her powers and keep her emotions in check.

After escaping from a Skrull ambush, Danvers crash-lands on Earth in Los Angeles and begins discovering she is not who she believes she is — Danvers is actually human. With help from S.H.I.E.L.D. agent Nick Fury (Samuel L. Jackson), Danvers starts to uncover the truth about her forgotten past on Earth and its connection with the Kree-Skrull war.

One of the biggest highlights of “Captain Marvel” is the acting. Larson shines figuratively — and at times literally — as the eponymous lead and brings plenty of charm and emotion to her role. She’s confident and strong but also shows subtle vulnerabilities as Danvers doubts and questions her identity. Larson has a great dynamic chemistry with her co-stars. In particular, Larson and Jackson have a relationship that resembles one typically seen in buddy-cop films. The film has a more serious tone but natural comedy still arises and doesn’t feel forced through the character interactions.

In addition, both Skrull commander Talos (Ben Mendelsohn) and fellow pilot and Danvers’ best friend Maria Rambeau (Lashana Lynch) really hit it out of the park with their performances. Lynch adds an extra amount of emotional depth in her interactions with Larson. The two consistently portray a close friendship and support that is being rediscovered out of separation and amnesia, and their interactions feel genuine and smooth.

In terms of spectacle, “Captain Marvel” doesn’t disappoint. The visual effects in “Captain Marvel” are superb, full of crisp color and imaginative designs. Hala, the Kree home planet, is architecturally designed with a slightly modernist vibe with minimalist rooms and fits with the strict, less emotionally reliant nature of the Kree people. The green pointy-eared Skrulls have practical makeup and prosthetics that look like the characters came straight out of the comic book, but they easily fit into the world of the film and feel very real.

”Captain Marvel” contains several important and empowering themes within its narrative. The themes of embracing who you are and never giving up in the face of adversity are very present. The most prominent themes, though, are female strength and self-confidence, which ties into both the story and the directorial choices — specifically the noticeable change away from the male gaze.

The male gaze is a term coined by film theorist Laura Mulvey in 1975 to describe the objectification and sexualization of women in film and media, as the camera perspective is made to be from a typically white heterosexual male. “Captain Marvel” works to counteract this through the portrayal of the women in the film. For example, Danvers’ suit is tactical and covers her whole body, and when she’s out of her uniform her look is grunge and casual.

The cinematography in “Captain Marvel” is well-done, with dynamic action sequences, including a fighter-plane chase sequence, and solid dramatic moments. However, there are points where some shots are oddly structured or poorly lit. The pacing of the film is fairly steady throughout and not one particular part of the story feels too rushed or too bloated.

With that being said, this movie can feel cramped or full of too much information. After all, “Captain Marvel” has to be a relatively standalone origin story for Danvers — who will show up in next month’s “Avengers: Endgame” — but it must also set up the future of the Marvel movies and make references and connections to the films that have come before it. As a result, while there is good pacing of the story, there is a lot packed into it and some points and supporting characters suffer from a lack of development or interest.

“Captain Marvel” is an important film, both in the context of the Marvel Cinematic Universe and for our own society. By no means is it perfect, but it provides a cohesive, enjoyable sci-fi action story that can awe and inspire, especially for girls looking for more positive representation. Whether or not you’re a longtime superhero moviegoer, “Captain Marvel” is an out-of-this-world, kick-ass story that’s worth checking out.