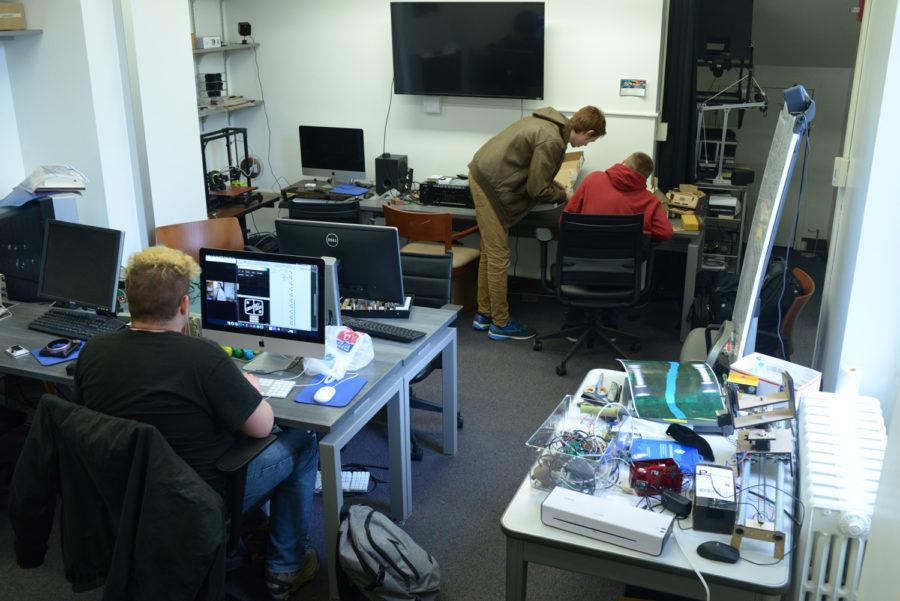 The inside of the Vibrant Media Lab in the Cathedral of Learning.

By Vaibhav Gupta, For The Pitt News

In a room on the fourth floor of the Cathedral of Learning, a group of students and faculty became the first in the world to revive one of the oldest video-game consoles.

The group, the Vibrant Media Lab, will present one of the earliest-created game consoles in history — the Magnavox Odyssey — to Pitt students on April 5 in order to promote a wider understanding of the history and culture behind video games along with the VML’s work for the past two years.

According to Zachary Horton, the director of the VML and an assistant professor of English, the Odyssey exposition exists to demonstrate the experience of early video gaming. He notes the experience of playing with the Magnavox Odyssey is not exciting only to video-game enthusiasts but rather is available for anyone interested in the gaming experience.

“The act of taking those experiences that are normally single-player and having them in an open environment and bringing them into a space with lots of people changes your understanding of the game experiences,” Horton said.

According to the National Museum of American History, the Magnavox Odyssey is a home video-game system created in 1972 that preceded the release of Atari by a few months. The console has limited capabilities regarding graphics, showing only a few blocks with a line moving in a lateral direction. Despite constituting a significant development in video-game history, the console only sold about 350,000 units in its prime due to poor marketing.

The VML started in January 2018, and its goal, according to the lab’s website, is to experiment in different types of media that can link the digital with a hands-on experience. The VML is available to any individual who is interested in media systems and accepts faculty, graduate students and undergraduate students from any background.

While the Magnavox Odyssey is the VML’s main project, new projects can be proposed starting in September. The lab’s website gives applicants wide-ranging control over their proposals and states specifically that it seeks to promote “collaborative research in material media systems and practices.”

The Odyssey exposition — the first of its kind in the world, according to Horton — will be open to the public, and trained members will be present to assist students with the experience. Horton said it will provide a new perspective of video-game evolution as it showcases early styles of gaming.

“It has two goals. One is to showcase the work Odyssey has now been doing for the past two years, and secondly make it accessible for the public to play and understand,” Horton said. “It’s not intuitive to people now in 2019 how to play this thing, and so one of the things that we want to do is give people that experience of what the beginning of video games was like.”

Ahmad Jumper, a sophomore politics and philosophy student, said VML’s expo offers a glimpse into the original technology that now constitutes his pastime.

Horton also said the Magnavox Odyssey project builds upon the existing foundation by including new game designs that aim to make the experience more marketable to university students. New levels will be present in the Odyssey games that offer new experiences curtailed at more modern arcade games.

“We do a lot of work to improve some of those original games, and then create new games that push the Odyssey in a new direction,” Horton said. “We are excited at the possibility of designing new games right now for the 1972 console, which is a very challenging console.”

Tim Zubizarreta, a student at the law school, has been working with the VML for more than a month and a half as a volunteer. He said the exposure to the video-game console was mesmerizing due to the experimentation and the research involved with the Magnavox Odyssey.

“I love the experimentation that is going on in here, being able to experience that, being able to look at the mechanics of these games and see how this translates to modern gaming and also interesting things that are lost by history,” Zubizarreta said. “Getting to be a part of game design and providing input on these games that are coming — this lab is fascinating for me.”

Video games have been present since the early 1970s and continue to have influence on modern culture, something Horton said the event is meant to convey.

“I think the much larger significance is to gain a tactile, concrete understanding of how our media culture has emerged, and to understand what the possibilities are,” Horton said.