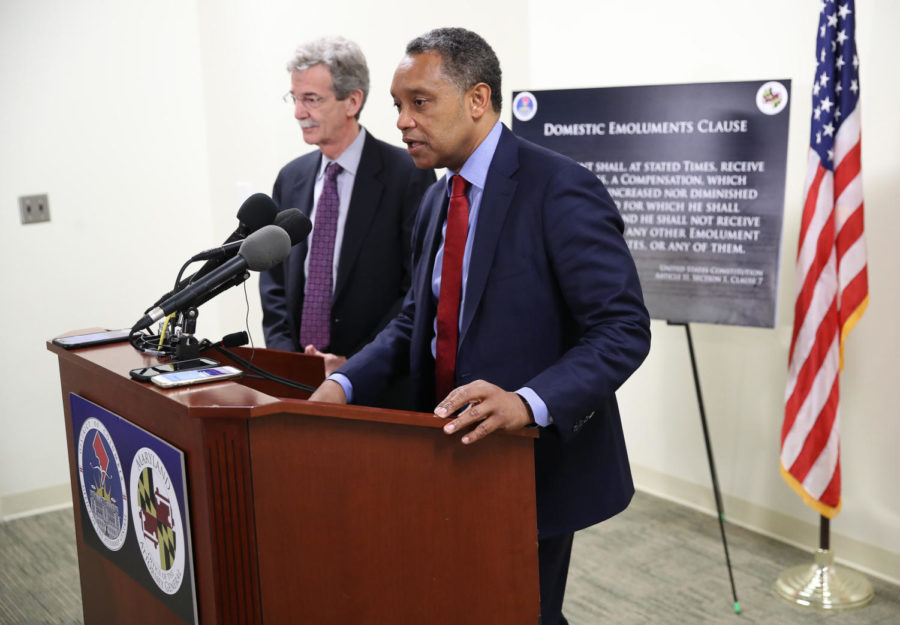 Maryland Attorney General Brian Frosh (L) and District of Columbia Attorney General Karl Racine (R) answer questions after a case before the United States Court of Appeals for the Fourth Circuit March 19, 2019 in Richmond, Virginia. (Win McNamee/Getty Images/TNS) **FOR USE WITH THIS STORY ONLY**

Donald Trump, as president and a private citizen, asked a federal appeals court to put an end to lawsuits challenging his ability to make money from his Washington hotel even if some of the revenue comes from other governments.

Democratic attorneys general from the District of Columbia and Maryland say that’s a violation of the U.S. Constitution. But they faced a skeptical panel of three judges appointed by Republican presidents, including Marvin Quattlebaum Jr., who assumed office in September.

“There is no authority to sue directly the president of the United States in his official capacity,” Justice Department lawyer Hashim Mooppan told the panel in Richmond, Virginia, on Tuesday.

The 2017 case was the first of three such lawsuits. At the heart of the dispute is Trump’s luxury Washington hotel only blocks from the White House, which has become a magnet for foreign dignitaries, state government officials and lobbyists.

The appeals court must decide whether the attorneys general can pursue the president on the premise that their jurisdictions are being harmed by the hotel’s competition with Washington’s convention center and Maryland’s nearby National Harbor hotel and retail development.

The president’s businesses reported a profit of $191,538 attributable to foreign governments in 2018, a 26 percent increase over the prior year. The Trump Organization last month said it donated an equivalent sum to the Treasury.

Trump said he resigned from all his businesses and put them in a trust managed by his son Donald Jr. Eric Trump is listed as an adviser for the trust. Whether that shift of business holdings — which includes about 500 entities — puts their foreign and domestic government-derived revenue far enough from Trump’s reach as to not violate the U.S. Constitution’s prohibition on presidents receiving things of value, or so-called emoluments, is the underlying factor the court will have to consider.

Justice Department lawyers argue the president can’t be sued under the emoluments clause for things he does as a private businessman. When the attorneys general added claims against Trump as an ordinary citizen, his lawyers said that wouldn’t fly either because the prohibition on emoluments applies only to things the president does in his official capacity.

U.S. District Judge Peter Messitte in Greenbelt, Maryland, twice rejected DOJ requests he throw out the case and then declined to grant the government permission to appeal. But Trump went to the appeals court anyway, and it put the case on hold until it ruled.

The appellate panel will decide whether Trump can be sued in his capacity as president, and/or as a private citizen, separately. The judges declined to consolidate the cases.

“The novelty of this action is eclipsed only by its legal shortcomings,” lawyers for Trump — the private citizen — said in court documents. “From the beginning of the republic, presidents have maintained private business interests while in office.”

Most presidents, however, gave up control of their businesses when they took office. Jimmy Carter notably put his peanut farm into a blind trust that was outside his control when he took office in 1977.

The attorneys general, in a Feb. 6 court filing, agreed their case is extraordinary, but only because, “President Trump’s disregard for the Constitution’s strict prohibition against receiving emoluments from foreign and domestic governments is indeed unprecedented.”

The president can be sued in both his official and individual capacities, D.C. Attorney General Karl Racine and his Maryland counterpart, Brian Frosh, said in court papers, contesting Trump’s claim the emoluments clause only covers compensation for services he renders as president. Such a narrow reading, they said, would undermine the law’s purpose: to prevent the possibility a chief executive could be corrupted by a foreign government.

Frosh and Racine in December issued subpoenas for documents to more than 30 entities including the Trump Organization, The Donald J. Trump Revocable Trust and Trump Old Post Office LLC, which operates the Washington hotel. Among the records sought, according to the president’s lawyers, are names of every guest who has stayed at the hotel or spent money there.

Almost 200 Congressional Democrats, led by U.S. Senator Richard Blumenthal, are still awaiting a Washington judge’s ruling on whether Trump has been receiving emoluments while in office and whether he must seek lawmakers’ permission before accepting them. U.S. District Judge Emmet Sullivan in September denied the president’s request to dismiss the lawsuit.

A New York-based federal appeals court heard arguments in October from a coalition of hotels and restaurants asking it to revive another emoluments lawsuit. That panel hasn’t ruled yet.