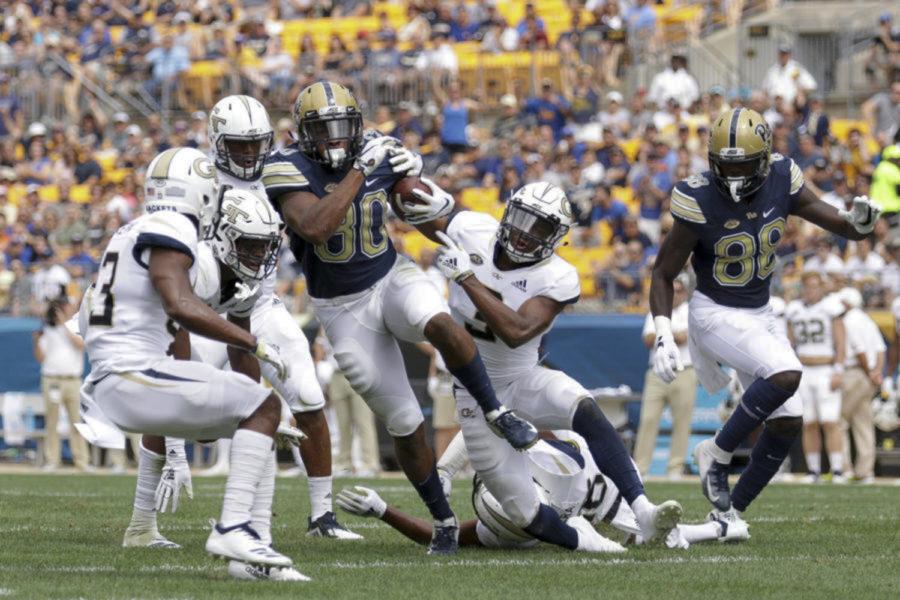 After the combine, nfl.com gave Qadree Ollison an overall rating of 4.93, putting him in the second-lowest category a player can get.

It was defensive lineman James Folston Jr. who stole the show at Pitt’s Pro Day on Wednesday. Folston led the group in the vertical leap and broad jump, showing off in front of 27 NFL scouts and former Pitt standout and current Pittsburgh Steeler James Conner, who made an appearance to support his former teammates.

“It’s awesome we have those come back and they care about their brothers and that’s the type of family atmosphere we have here. Those guys are coming back to watch,” coach Pat Narduzzi said.

Twelve Pitt seniors competed for a chance to make it in the NFL at Pitt’s 2019 Pro Day. The Pro Day, which gives players who weren’t invited to the NFL Combine the opportunity to compete in front of NFL scouts, was held at the UPMC Sports Complex. Notable NFL teams that sent scouts included the Patriots, Chargers, Eagles, Saints, Giants, Packers and, of course, the hometown Steelers.

The seniors participated in various drills and exercises before the scouts. The former Pitt football players competed in drills such as the bench press, vertical jump, broad jump, 40-yard dash and other various agility drills.

Pitt only had one player invited to the NFL Combine — running back Qadree Ollison. After the combine, NFL.com gave him an overall rating of 4.93, putting him in the second-lowest category a player can get. The rating means the player “should be in an NFL training camp.”

Ollison only participated in two drills: the three-cone drill and the 20-yard shuttle.

“For me, I wanted to do the short shuttle and the L-drill again,” Ollison said. “My numbers went down in both those categories.”

Linebacker Quintin Wirginis and offensive lineman Alex Bookser only participated in the bench press due to previous leg surgeries.

To start the day, players and scouts gathered in Pitt’s weight room to gather measurements like height, weight and body-fat percentage.

During the measurements, Steelers linebacker Ryan Shazier showed up as a representative for the professional Pittsburgh team. Shazier’s appearance brought more energy into the room as players prepared for the bench press. In the bench press, players are expected to lift 225 lbs, testing the athlete’s strength and stamina.

Bookser then decided to get in on the action himself, matching Aston with 29 reps. The two tied for the top scores of the day.

The highest mark at the NFL Combine in the bench press was 39, done by Weber State offensive lineman Iosua Opeta. Neither of Pitt’s highest performers would have cracked the top 10 at the combine. The eighth-highest score was 30.

As the other 10 athletes finished the bench press, they moved to the indoor facility for the field drills, including the 40-yard dash.

Based on their serious demeanor, it was clear the former Pitt Football players were determined to perform at the highest level. As the scouts were settling in, the players warmed up, preparing to showcase their abilities.

Although Bookser and Wirginis would not participate in the field drills, they were still present for the agility drills and supported their former Pitt teammates for what could be their last time on the field together.

The first indoor event the athletes competed in was the vertical leap. The vertical leap requires players to start standing still and leap upwards, measuring an athlete’s lower body strength.

Folston jumped and cleared 40.5 inches, which would have put him tied for eighth among the Combine invitees. Following Folston was wide receiver Rafael Araujo-Lopes at 36 inches and defensive back Colin Jonov at 33.5 inches.

Jonov spoke about the benefits of performing amongst close teammates and supporters, as opposed to a cumulation of unfamiliar talent at the Combine.

“They were there the whole time,” Jonov said. “They were gassing me up again and just being able to train with some of them, they’re the best.”

For the third field drill, the players participated in the broad jump, where the athletes must jump as far as they can from a standing position. While it may seem like it’s all about power, the exercise also requires a great deal of balance and the ability to control their body. While the players can use their momentum to carry them forward, if they end up leaning back too much upon landing, they will have to redo their attempt.

Continuing to impress, Folston led the pack again on the broad jump with a jump distance of 10 feet and nine inches. Tailing close behind was defensive lineman Dewayne Hendrix, who posted a 10-foot, seven-inch jump and Araujo-Lopes, who posted a strong 10-foot, three-inch. After finishing the first three events of the day, all of the players participating in the the 40-yard dash were ready to put their cleats on.

Pitt didn’t announce the 40-yard dash times, but Pittsburgh Sports Now timed running back Darrin Hall at 4.4 seconds — a top time for any NFL running back.

Whether or not Ollison and his former teammates’ performances were enough to get them to the next step won’t be known until the NFL Draft begins on April 25. Until then, they will just have to wait for a phone call they may never get. Ollison himself has faith that overall, the Panthers displayed their prowess well.

“It was great to get out here again with my teammates, my brothers, and just compete, just put our skills on display for all the scouts here,” Ollison said. “I think everybody did a great job, I think everybody made themselves a little money today.”