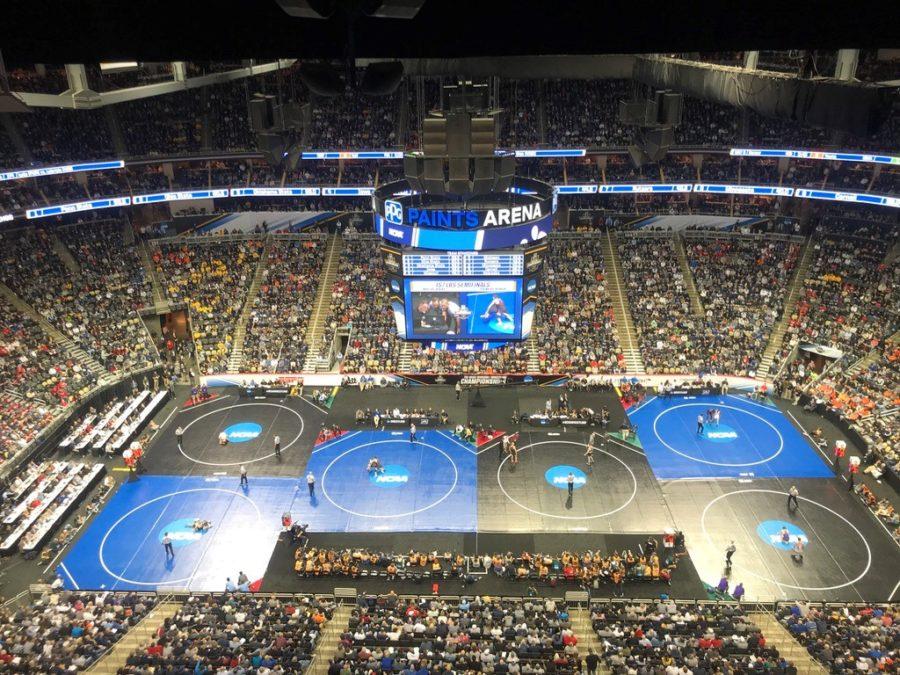 Over 18,000 fans flocked to Pittsburgh's PPG Paints Arena for Day 2 of the NCAA Division I Wrestling Championships on Friday.

Despite a promising first and second session on Thursday that saw two Pitt wrestlers still alive in the championship bracket, sessions three and four were ultimately a disappointment for the Panthers. Not only were all Pitt’s remaining wrestlers eliminated, but none achieved All-American status, earned when a wrestler makes the semifinals. Phillippi, Rahmani and Bonaccorsi were eliminated just one victory short of reaching the coveted accomplishment.

No. 4 Phillippi wrestled in one of the first matches of the day against an opponent he faced countless times growing up — No. 5 Luke Pletcher out of Ohio State. Phillippi, a nearby Derry native, and Pletcher, a Latrobe native, matched up across from one another all throughout youth wrestling and high school, as well as in a match earlier this year at the Cliff Keen Las Vegas Invitational where Phillippi took a 2-1 win. The two wrestlers started the match slowly, but Pletcher used an impressive ankle pick and riding time to take a lead into the third period. Phillippi sent shot after shot at him in the final frame, but ultimately failed to take him down and lost the match 3-1.

Later, Phillippi took on No. 10 Penn State first-year Roman Bravo-Young in the consolation bracket. Again they started slowly, staying low and almost headbutting each other in the center of the mat. Bravo-Young pulled out a barrage of trips to get Phillippi off-balance, taking him down twice. Although Phillippi escaped every time he was taken down, he couldn’t get the last takedown to take the lead, falling out of the tournament 4-3.

“Honestly, I don’t even know what to say because my heart is broken,” Phillippi said. “I wanted that so bad. I wanted to win this tournament.”

No. 13 Nino Bonaccorsi was a pleasant surprise in the first two sessions of the tournament, advancing past Utah Valley’s Will Sumner and upsetting No. 4 Emery Parker out of Illinois by a score of 9-7. Unfortunately, his first match against No. 5 Cornell sophomore Maxwell Dean didn’t go as well. Bonaccorsi suffered a takedown about halfway through the first period, and by the start of the third period trailed by over two minutes in riding time. Bonaccorsi attacked early in the third, scrambling with Dean for position. But finally, Dean took the match after taking down Bonaccorsi one more time, extending his lead to 5-0 for good measure.

In the evening session, Bonaccorsi took on No. 26 Oklahoma State redshirt sophomore Dakota Geer. The wrestlers traded hand fighting, pushing and half-hearted shots until Geer capitalized on a sloppy shot from Bonaccorsi. Geer picked bottom position to start the second period and went up 3-0. In the final period, Bonaccorsi got taken down one more time off a desperation shot, exiting the tournament in disappointing fashion after such a hot start.

The Panthers’ luck didn’t get any better when No. 8 Demetrius “Meech” Thomas stepped onto the mat for his consolation match against No. 26 Brown senior Ian Butterbrodt. Thomas fell 17-9 to CMU’s Matt Stencel in the previous session — an opponent he pinned earlier in the year. Thomas’s match had by far the most points of any Panther, but unfortunately Thomas was on the wrong side of the scoring. He started out strong with an incredibly powerful double-leg takedown on Butterbrodt. But Butterbrodt answered back in the second and third periods with an array of pull-throughs and tilts that netted him eight extra points. After escaping with about thirty seconds left and down 15-7, Thomas knew there was little he could do to win the match, and both wrestlers rode out the clock until the whistle blew.

No. 12 Taleb Rahmani was Pitt’s lone bright spot on the day. The 157-pounder started the day already in the consolation bracket, but that didn’t stop him from wrestling as hard as he could. In his first match against No. 11 redshirt junior Ke-Shawn Hayes out of Ohio State, the two got into a hectic scramble that ended up with Rahmani on his back — on top of Hayes. Those back points, along with a takedown, netted him an extra four points. After a final takedown in the third, Rahmani emerged victorious by a score of 6-1.

Then, Rahmani took on No. 19 redshirt sophomore Griffin Parriott out of Purdue in the Panthers’ most exciting match of the day. In the first period, both wrestlers start out in a scramble with opportunities that neither of them could finish. Rahmani spent most of the time being controlled in front headlock position, but Parriott never got anything out of it. In the second, Parriott earned a quick escape point — the only points of the period.

To start the third, Rahmani chose bottom and escaped quickly as well, tying the score 1-1. He then launched into a quick shot that nearly saw him pin Parriott, but no position was gained and the match went to overtime.

Parriott started overtime with a quick shot of his own, but Rahmani remained alert. He fended off the shot then, in a sudden turn of events, changed position and put Parriott on his back, pinning him and ultimately winning a low-scoring but entertaining overtime matchup.

In his final match of the day, Rahmani faced off against No. 9 grad student Christian Pagdilao from Arizona State. The two wrestlers traded points throughout the match, but Rahmani entered the third down 6-3. He began the final frame ambitiously, trying to bear hug his opponent. In an intense struggle, Rahmani ends wound up on his back. He muscled his way off the ground, switching positions to put Pagdilao on his back for a brief moment before coming back to neutral after a frantic scramble. Despite putting up a noticeable effort out and forcing a second stall call on Pagdilao, Rahmani ultimately fell 13-7.

After the match he collapsed on the mat, looking utterly devastated despite being the only Panther to win a match on the day.

A bit of a disappointment for the University of Pittsburgh, the Panthers advance no wrestlers to the next round, but that doesn’t mean there’s nothing to take away from Friday. Of the 320 wrestlers left after the first two sessions, Pitt had three Panthers one match away from All-American status. Two of the wrestlers who stepped on to the mat  — Phillippi and Rahmani — were redshirt freshman. Pitt as a team performed to their expectations. The tournament was also an enormous success for the city of Pittsburgh, whose “Steel City” mantra fit in perfectly with the mentality of college wrestling. With a world class head coach in former national champion and two-time All-American Keith Gavin, as well as a promising young roster with boatloads of potential, the sky is the limit for this team in the coming years.