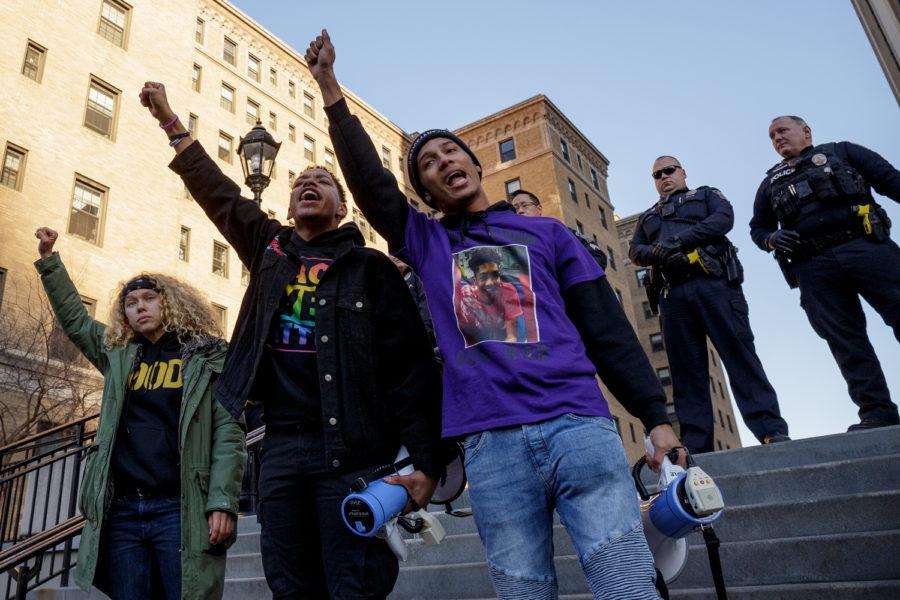 Protests broke out Friday night in Pittsburgh almost immediately after a jury found white former East Pittsburgh officer Michael Rosfeld not guilty in the shooting of unarmed black teenager Antwon Rose II. Less than a day later, those protests came to Pitt’s campus, where hundreds of demonstrators circled through Oakland, demanding justice for the memory of 17-year-old Rose.

The Saturday protest began shortly after 5 p.m. as a circle of about 50 people gathered in Schenley Plaza. Organizers of the protest began call-and-response chants, including “Who did this? The police did this.” Concentrating on Rose’s age and the fact that he had been shot while running away, they read a widely circulated poem he had written at 15 about growing up black in America.

Protesters supported the creation of a community police review board for Allegheny County. Other demands included the dismissal of Ronald Swartzwelder, the president of the local police union Fraternal Order of Police Fort Pitt Lodge 1, and Allegheny County District Attorney Stephen Zappala.

Zappala served as prosecutor in the trial of Rosfeld, who shot Rose three times in the back in June 2018. The trial began Tuesday, and deliberations began Friday shortly after 4:30 p.m. The jury reached its verdict in less than four hours, acquitting Rosfeld of all charges.

Zappala released a statement after last night’s verdict was announced.

“While I respectfully disagree with their verdict, it is the people of this commonwealth who decide guilty or not guilty and they have spoken to this matter,” he said.

Activists have called previously for the firing of Ronald Swartzwelder, the president of the local police union Fraternal Order of Police Fort Pitt Lodge 1, after a December grand jury report found he had impeded investigations of two police shootings, one of which was fatal.

The idea of an Allegheny County police review board, which would consist of community representatives and retired law enforcement officers, gained support in the wake of Rose’s shooting. The board activists envision would facilitate community oversight of every police department in the county, excluding Pittsburgh’s, which has had its own police review board since 1997.

At one point, organizers led the protest into The Porch, a restaurant in Schenley Plaza.

“Why do you care if you can’t eat right now?” one organizer said to patrons who were dining. “Antwon can never eat again.”

After exiting The Porch, the protesters, joined by an increasing number of newcomers, moved to stand in the crosswalks on all four sides of the intersection of Forbes Avenue and Bigelow Boulevard. They blocked traffic for about ten minutes, though they allowed emergency vehicles to pass.

As drivers who were unable to cross Bigelow honked, protesters turned their chant on the drivers, asking, “You can’t get by, but did you die?”

The protest followed a circular path, moving down Bigelow to Fifth Avenue, where protesters turned and marched as far as Atwood, eventually returning to Schenley Plaza via Forbes Avenue.

Organizers periodically made announcements for the benefits of new protesters, reminding the crowd that it was possible there were undercover police officers and that the protest was intended to be peaceful. There were medics on hand with food and water for anyone who needed it, they said.

The march made a brief stop by the Fifth Avenue entrance to Litchfield Towers, where organizers stood on the steps to address the crowd. Several Pitt police officers blocked off the top of the stairs, preventing protesters from going farther.

East End resident Dee Wilkerson, who had brought a young child with her to the protest, pointed at the police officers.

“You can’t trust them,” she told the child.

Wilkerson said she was upset by the pattern she saw in Rosfeld’s shooting of Rose.

“I’ve seen this happen my entire life and I am so tired of black men, of unarmed black men, being shot by the police,” Wilkerson said. “It has to end.”

The protest lost a few members as it moved through Oakland, but gained many more, growing large enough to fill the intersection at Forbes Avenue and S. Bouquet Street. Clara Grantier, a junior environmental studies major, joined the protest with her friends after hearing the chanting outside. Though she wasn’t familiar with the organizers’ specific demands, Grantier said she joined because she was unhappy with the jury’s finding.

“Students should get more involved with causes like this, and holding a protest is a good way to do that,” Grantier said. “I don’t think justice was served.”

Brian Gentry and Neena Hagen contributed reporting to this story.