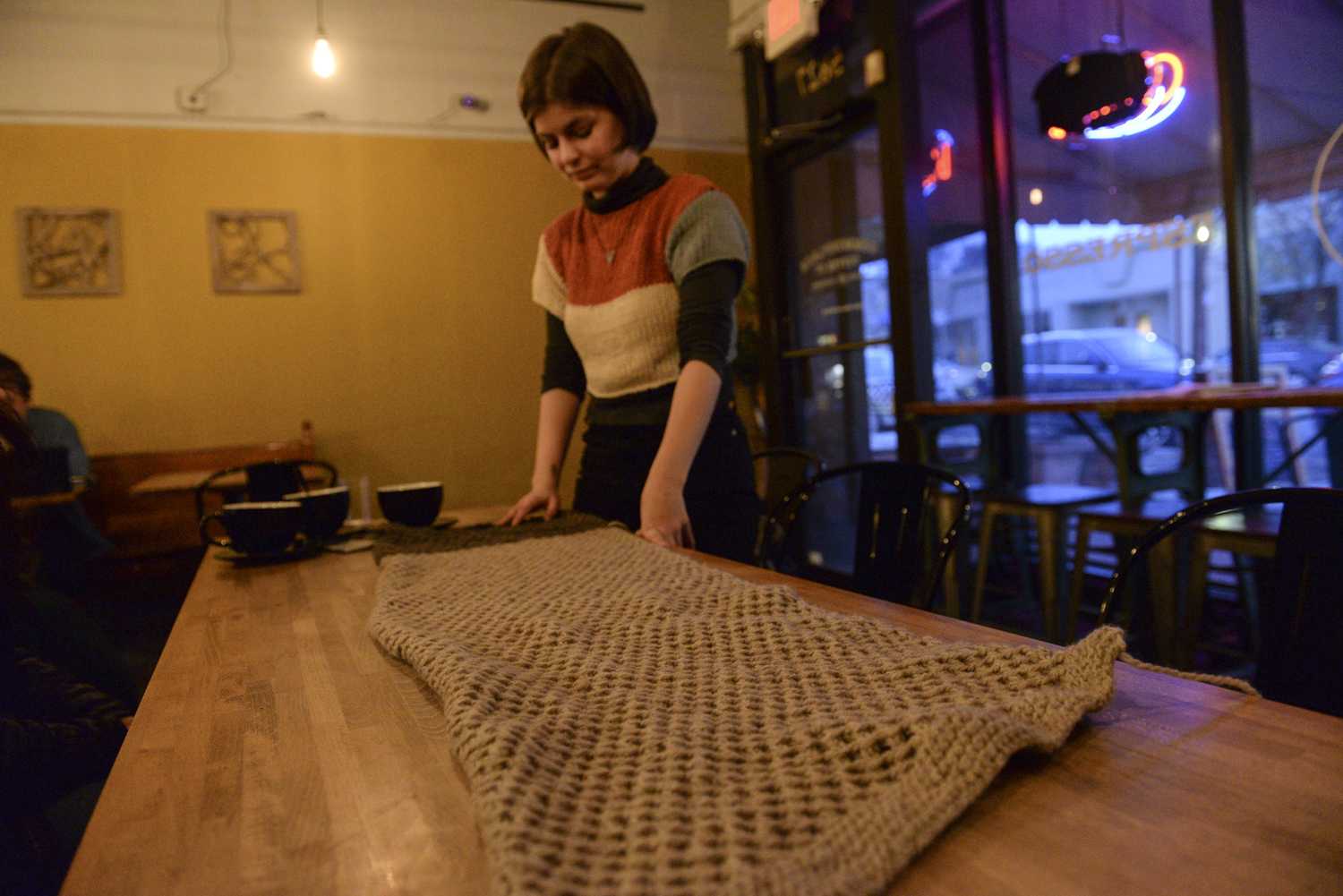 Chloe Baierl can be found holding a pair of knitting needles almost anywhere, including the first floor of the Cathedral of Learning, behind the counter where they work as a barista at Ace Hotel and even on the bus.

They especially enjoy knitting in coffee shops around Pittsburgh, their clear green eyes focused on the task at hand. Baierl began working at a Zeke’s Coffee after they moved back to their native Pittsburgh to attend Pitt after transferring out of American University. They have come to associate those environments with their return and readjustment.

“I’m a pretty socially anxious person, but I like being around people,” Baierl said. “Coffee shops are kind of an environment where you can be by yourself but amongst others. You can hang out with people but you can also be by yourself and that's still socially acceptable. So I really like that and I found myself knitting at coffee shops — when I wasn’t working — more and more.”

Baierl’s interest in knitting is genetic — they were inspired by their mother to pick up the art.

“I saw my mom [knitting] all the time,” Baierl said. “She used to make washcloths a lot when I was a kid. I thought it looked kind of scientific. It was just magical seeing yarn become fabric or something else completely.”

Baierl’s mother, who was left-handed, struggled for a while to teach her right-handed child how to knit. It wasn’t until Baierl was 8 years old and their paternal grandmother from Tennessee came up to visit that Baierl finally figured it out. Their nana — right-handed — taught them in only five minutes.

As a child, they knitted a lot but usually didn’t complete projects. They stopped in middle school, when they felt that knitting “wasn’t cool,” deciding it was “something that only grandmas did.” They didn’t start again until the end of high school as a way of improving their mental health. For Baierl, knitting became a therapeutic way of coping with the anxiety and stress they often struggled with.

“I have some fidgety disorders too,” Baierl said. “One of them, I like to pull my hair kind of compulsively and it’s tied to stress, so I used knitting as an outlet to help me not pull my hair as much, to not pick at my fingernails or skin. To do something more productive as an outlet for all of that really anxious energy I was just penting up.”

“I’m really interested in making knitting into a more finer abstract art form than clothing design. You see a lot of people that do that with knitting or weaving or even crocheting, and go out of the realm of clothing and make actual fine art out of yarn.”

Baierl’s partner of three years, Geoff Bland, described Baierl as knitting anywhere and everywhere, with yarn sometimes tumbling out of their backpack. Bland is supportive of Baierl’s passion and together they are thinking about transforming their basement into a cozy studio space for Baierl to knit and store supplies.

As a double major in English nonfiction writing and literature, Baierl has found a lot of parallels in writing and knitting. Like knitting, writing requires working with a larger framework in mind of a story they hope to create and explore. However, as they begin writing, this initial outline tends to change as more ideas develop. Similarly, knitting relies on initial planning that changes with progress.

“Most of the time when I’m knitting I’m kind of improvising,” Baierl said. “I just kind of go with the flow of it like I do with writing. It’s very cerebral in a way because it allows me to go into a meditative space that’s outside of my normal thought process, and really focus on what I’m creating in front of me, which is kind of like the same headspace I’m in when I’m writing.”

“Most of the time when I’m knitting I’m kind of improvising.”

Baierl has even blended these two interests — last fall, they made a video essay for their multimedia class exploring how knitting brought them closer to their nana, whom they had previously felt estranged from.

Baierl’s father, Bill Baierl, is especially pleased that his child has found a pastime that is good for their mental health and keeps them grounded in the moment. He said that Baierl was creative for as long as he can remember, always engaging in the arts since childhood.

“The creativity is just part of their makeup,” he said. “Becoming a release is more of a reaction to their environment. Their grandmother, my mother, who taught them to knit was a graduate of fine arts at Pitt. She was an interior decorator who ran her own shop for quite some time so they come by it naturally. I still paint and draw, and their brother does quite well at drawing. The creativity and the artistic aspect is largely genetic and is just part of who they are. We live in very anxious times and it’s been a good release for them.”

Baierl’s grandmother passed away in March 2016, but they feel that they carry a part of their grandmother’s life with the interest in knitting that was passed onto them.

“I feel a lot closer with her in that respect than by actual interaction that we had,” Baierl said. “It’s kind of like a relationship that transcends time and space, which feels a bit voodoo to say, but I think there is definitely something a bit emotional with a heredity with passing on skills.”

“It feels nice to do kind of a weird unconventional thing in public.”

As their grandmother taught them, Baierl has continued to share their passion of knitting with friends and coworkers who are also interested in the craft. In high school, Baierl worked as a summer lifeguard, and spent their summers knitting at the poolside. They discovered they enjoyed using fine cotton or linen yarn to make thin, boxy, high neckline tank tops. They think this is because they prefer summer over winter, and knitting these lighter clothes reminds them of warmer weather which makes them happier.

They taught the other lifeguards they worked with until knitting together became a summer routine.

“Teaching knitting makes me look at it from a different perspective,” Baierl said. “I can do all of the movements without thinking that much. The muscle memory is there, so having to backtrack and find good descriptive words is a cool way to step back and be more reflective of the actual process of it.”

Baierl found a community of knitters while working as a barista at the Ace Hotel in East Liberty — their friend and former coworker Atiya Jones is a local artist who runs a knitting group on Tuesday each month from 6 to 8 p.m.

Bariel’s coworker at the Ace Hotel and fellow knitter Kaiti Jarose also finds Bariel’s passion very beneficial. The two of them often knit together at work. She is especially impressed by Bariel’s ability to create patterns essentially from scratch.

“I think Chloe’s strongest talent in terms of knitting is their understanding of the math,” Jarose said. “I always thought that was really impressive because that’s what has led them to be able to create patterns pretty much from scratch. I’ve gone with them to knitting stores before with just having a project in mind and they were happy to help me figure out what size yarns would do with certain lengths in their head, and they could just do all that from their head.”

Baierl sold their knitted products at their first flea market in February at Spirit bar in Lawrenceville, hawking winter beanies, wristlets and coffee cozies. They stick to basic primary colors and earth tones, never really gravitating toward bright yarns. They most frequently knit simplistic beanies and scarves. Right now, they’re working on a massive blanket scarf they started last January that was inspired by a picture they saw of Lenny Kravitz in his huge scarf.

“Before I knit a big thing,” Baierl said, “I’ll make a little square called the ‘swatch’ where I’ll measure exactly how many stitches are in a certain number of inches. Then I’ll take measurements from myself and use the swatch measurement to see how many stitches I’ll need to have for a given garment. This is kind of mathy, and I always really liked math as a kid but was a bit creative and didn’t know how to pair that with math. So knitting is a way to bridge those things, which is really fun.”

The hardest thing Baierl said they ever knitted was their first sweater, which took a couple months to complete. They would love to try to knit a bra someday and explore the notions of sexiness and “grandma crafts.” They’re also interested in treading a line between lower craft arts and the fine arts with knitting.

“I’m really interested in making knitting into a more finer abstract art form than clothing design,” they said. “You see a lot of people that do that with knitting or weaving or even crocheting, and go out of the realm of clothing and make actual fine art out of yarn.”
Knitting in public spaces has given Baierl confidence in their passion, so much so that they feel people are not questioning or judgmental.

“It feels nice to do kind of a weird unconventional thing in public,” Baierl said. “Especially with social anxiety. It’s a nice exercise in not really giving a fuck.”

A previous version of this story referred to Atiya Jones as Aria Jones.