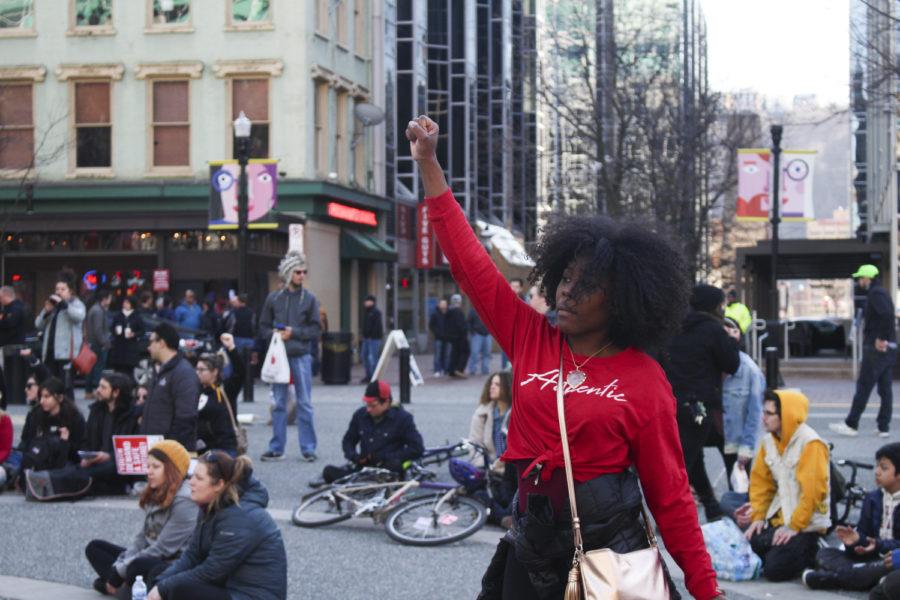 Protesters marched from Freedom Corner in the Hill District to Market Square, where they continued their demonstration.

Following a night of impassioned protests across Pittsburgh, about 300 people huddled together at Freedom Corner Saturday afternoon to pay tribute to Antwon Rose II, who was only 17 when Officer Michael Rosfeld fatally shot him on June 19, 2018.

The crowd fell into silence as Rose’s father, Antwon Rose Sr., stepped onto the stage and expressed his gratitude for the outpouring of support.

A jury acquitted Rosfeld Friday after only four hours of deliberation, which drew the peaceful protesters to the Hill District neighborhood less than 24 hours later. The site was chosen due to its significance in the Civil Rights Movement, when more than 2,000 protestors gathered to board buses to Washington D.C. for Martin Luther King’s “I Have a Dream” Speech in 1963.

“I can’t even imagine what this man must be feeling right now,” Howze said, pointing to Rose Sr. “We have sent a message to young black boys that if you kill ‘em, there’s no price to pay.”

Gainey closed the 25-minute ceremony with a prayer for Rose, but told the crowd they must do more than just pray.

“Say something more than I’ll pray for you, because prayer without faith ain’t worth nothing,” Gainey said.

About 200 demonstrators from the vigil then marched down Centre Avenue to begin a nearly two-hour peaceful protest through Downtown and neighboring areas of Pittsburgh. Signs that read “Justice for Antwon” dotted the parade.

“Pittsburgh wants us to feel like we don’t matter,” one protester shouted to the crowd, before planting her feet in front of a long line of cars.

She began a call-and-response chant, clearly directed at the police, who were lining the streets in anticipation of the protest.

“Who did this?” she shouted. “The police did this.” Hundreds of protesters joined in.

The leaders of the protest made their demands very clear. Emblazoned on one sign was a list of three demands — to fire the president of the Fraternal Order of Police, to fire District Attorney Stephen Zappala and to support the creation of an Allegheny County police review board.

Zappala supervised Rosfeld’s trial, and released a statement after the officer’s acquittal.

“While I respectfully disagree with their verdict, it is the people of this commonwealth who decide guilty or not guilty and they have spoken to this matter,” he said.

Many activists have also made a concerted effort to force out FOP President Ronald Swartzwelder, after a grand jury report found he obstructed investigations of two police shootings.

A community police review board, which would allow selected community members to oversee police activity, has been a common demand of the Black Lives Matter movement — going all the way back to 2014, when Michael Brown, an unarmed black teenager like Rose, was shot and killed by a white police officer in Ferguson, Missouri.

The crowd stopped at a clearing, and leaders ushered the several hundred marchers into a circle, then told them to kneel and raise their fists.

“Hands up, don’t shoot,” the leaders chanted in an homage to Michael Brown, who, according to witness testimony, had his hands up when he was shot.

Rose wrote poetry about Brown’s shooting when he was 15 years old, expressing fear that he might meet the same fate. Brittney Chantele, an organizer leading the charge, read a few lines for the crowd.

“I’m confused and afraid … I understand that there’s only two ways out,” Chantele said through her megaphone. “I understand people believe I’m just a statistic.”

“I think it’s awful that people who don’t look like me have to worry about this on a daily basis,” he said.

Alisa Grishman, a wheelchair-bound disability advocate, attended the protest for its entire duration. She decided to support the effort in a way only she could — by parking her wheelchair in front of buses to let the hundreds of protesters march past her.

“Bus drivers are super cautious around wheelchairs,” she said, gesturing to the disgruntled-looking bus driver in front of her.

Grishman has a long history of attending protests. She rallied in favor of the Affordable Care Act in Ohio in 2017, when Republicans were threatening to repeal it, and where she was pushed out of her chair by police officers — an altercation that made national news.

“I don’t mind putting myself in danger to protest travesties like this,” Grishman said. “But the good news is, this protest has been very peaceful so far.”

Pittsburgh police spokesman Chris Togneri told the Post-Gazette after the vigil that the City did not need to arrest one protester. But the City was fully prepared in case violence did erupt, according to Togneri. Police cars and motorcycles lined the protest for the full two hours, and police officers on horses were stationed Downtown if backup was needed.

Leaders emphasized that all protests of Rosfeld’s acquittal should be peaceful — they repeated that sentiment several times at the Downtown protest, and again that evening when the march came to Pitt’s campus.

One of the speakers declined to give her name, but identified herself as Rose’s cousin. She nodded at leaders’ calls for peace and said the protest was about bringing people together in trying times, not driving a wedge between police officers and the black community.

“We gotta all come together,” she said. “I’m not labeling all cops as bad … and I think a lot of people want to label Antwon as bad when he wasn’t. He was just a scared 17-year-old kid.”

Sharon Lucas, an older black woman who carried a sign that read, “Antwon Rose gone too soon,” said her son, who is now 36 years old, could have ended up just like Rose.

“With the color of his skin, my son is very lucky he was able to grow up, get married and have a family,” Lucas said. “Antwon is not gonna be able to do any of those things.”

Lucas said she’ll continue to come to rallies like this one to raise awareness about racism and police brutality. A walk-out for high school and college students, entitled “Justice for Antwon Rose II,” is scheduled for Monday at 11 a.m. in front of Pittsburgh’s City Council building. This protest includes an expanded list of demands — changes to environmental policy and access to affordable housing, in addition to the initial goals of Saturday’s protesters.

“I had to come out today knowing how lucky I’ve been,” Lucas said. “My son, Antwon and others who define the [Black Lives Matter] movement like Michael Brown — there’s no reason they shouldn’t all still be here.”