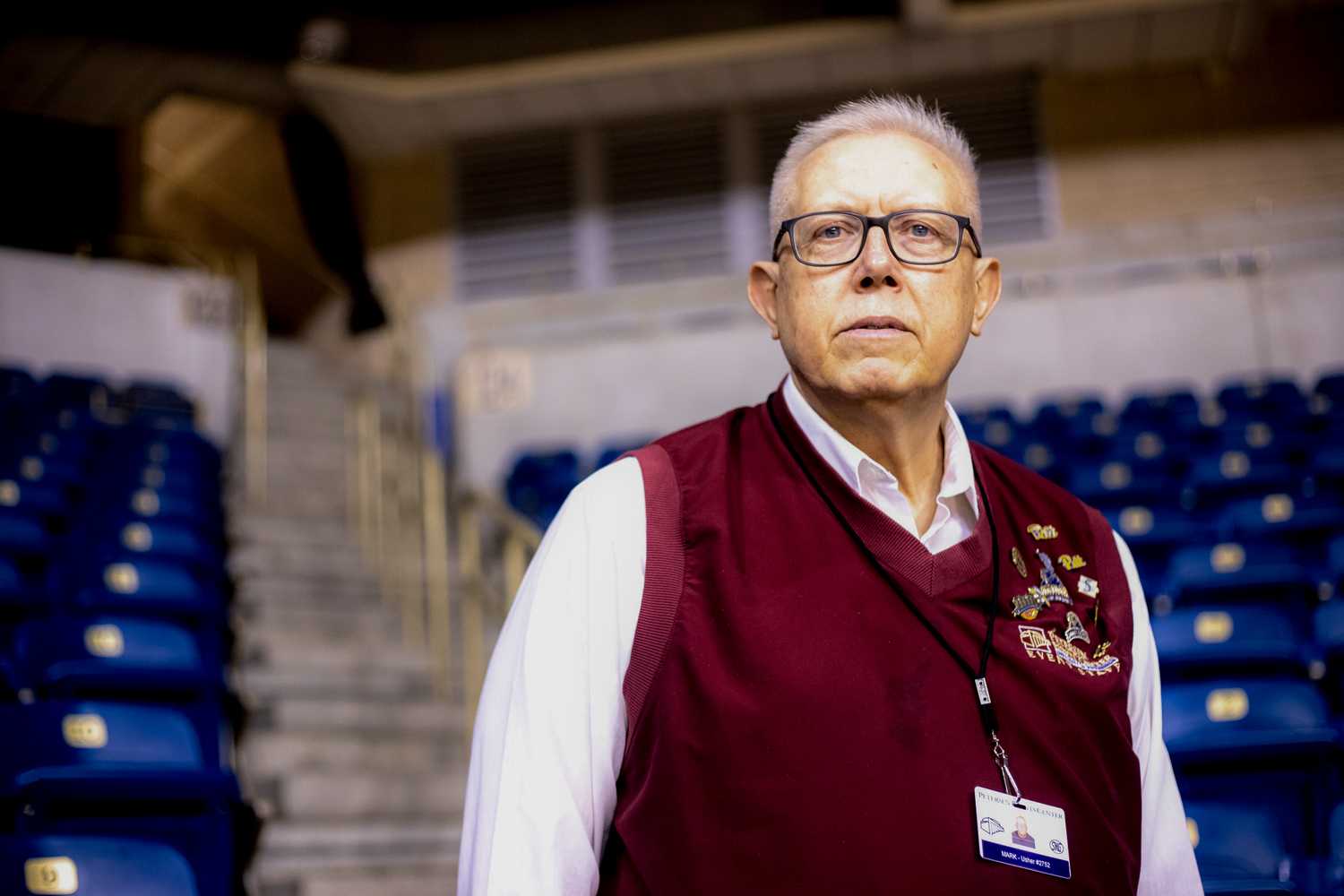 Mark “Kools” Mikulich: A permanent fixture at the Pete

But one thing has remained consistent: Mark “Kools” Mikulich.

Mikulich, a 61-year-old Pitt athletics usher from Ambridge, has always arrived at the Petersen Events Center early enough to shake everyone’s hands before the beginnings of games. One of those regulars was Dick Groat, a Pitt men’s basketball radio analyst, who said he doesn’t know if he considered Mikulich’s presence superstition or ritual.

“We won a lot of basketball games there before last year came around,” Groat said. “And we are kind of superstitious about always shaking hands.”

Mikulich has stood in the corner near the home team’s tunnel at almost every single Pitt men’s and women’s basketball game since 1984.

He watched Pitt upset UConn on March 7, 2009, at the Petersen Events Center. He saw the demolition of Pitt Stadium in 1999 and the building of the Pete in 2002. He met Jay-Z when he escorted him to his seat at the Pitt vs. Duke game earlier this season.

But before Mikulich was an usher, he was a Pitt fan. His love for Pitt began when his dad took him to his first football game at Pitt Stadium in 1969, when he was 12 years old.

“I just felt at home,” Mikulich said. “Like, I was in Oakland, and boy, this is a cool thing.”

Mikulich’s love for Pitt sports continued through the years, and in the early 1980s, he and his friends bought men’s basketball season tickets at the Fitzgerald Field House. One game, they started talking to Ted Mrkich, the head of all Fitzgerald Field House ushers at the time. The two fostered a friendship at games over the next few years until Mrkich hired Mikulich in the summer of 1983 to usher football games at Pitt Stadium.

Mrkich asked Mikulich to stay on the staff after the football season ended for men’s and women’s basketball games. For Mikulich’s first season, he was in the corner opposite of where the Panthers ran out because John Hillgrove, who at the time had worked longer than Mikulich, was the usher manning the home team’s tunnel.

“Mark and I became fast friends virtually from the first time we met,” Hillgrove said. “I remember like it was yesterday. He struck me as being very conscientious and I thought, ‘He’s going to be a great usher,’ because he took everything seriously.”

With a new corner came new responsibilities. Mikulich was put in charge of the blue-back seats. While most of the Fieldhouse has bleacher seating, there was a special section for top donors with regular stadium seating. Mikulich was in charge of seating the VIPs and making them feel comfortable. He took his job seriously and started making relationships with fans, donors and players.

“Probably my favorite moment, I gotta say, is just meeting so many people at the Pete all through the years,” Mikulich said. “I got to meet so many nice people and they’re Pitt die-hards just like me. And I think that’s the most special moment for me, just meeting all new people that I’ve never met before because of this job.”

“Probably my favorite moment, I gotta say, is just meeting so many people at the Pete all through the years,” Mikulich said. “I got to meet so many nice people and they’re Pitt die-hards just like me. And I think that’s the most special moment for me, just meeting all new people that I’ve never met before because of this job.”

Mikulich cares about the people who attend games and can name almost every season ticket-holder. Pitt’s broadcasters know him by name and make it a point to stop and talk to him before and after games. When Oakland Zoo members see him working at the annual commencement ceremony, some stop and ask him for a picture.

“Just watching him operate and witnessing it on a regular basis, he’s beyond an usher,” Pitt broadcaster Bill Hillgrove — John’s brother –– said. “He is such a friendly guy and makes people feel welcomed, that’s his mark. He goes beyond his job description.”

Ushering isn’t Mikulich’s only job. During the day, he works at Standard Horse Nail Company in New Brighton, where he has been a machinist for more than 30 years. At work, Mikulich mans the milling machine that helps make keys for different car companies.

He also was an avid softball player, traveling all over Beaver County to compete, until he hung up his spikes two years ago since working two jobs just didn’t give him the time he needed.

But he still stays active. Mikulich plays basketball a couple times a week with some friends in Sewickley. He has also taken up golf. Mikulich has played at Groat’s golf course and has golfed in other outings with Pitt people. He also has a league he plays in over the summer.

“I’m a pretty active guy, which keeps me going,” Mikulich said. “Not just everybody could be able to do that … going from one job to another within a matter of an hour, an hour and a half.”

Staying active has also helped Mikulich keep an almost-perfect work attendance. The only times he can remember taking off were a couple days when his dad was sick. Mikulich’s boss, Jodi Hummert, doesn’t even remember the last time Mikulich took off.

“He’s there for every men’s game and every women’s game,” Hummert said. “He’s definitely one of my top ushers regarding attendance, as well as just, what’s up about Mark is that he loves the sport so much.”

The attendance isn’t what is important to Mikulich. It’s being there for the people who rely on him.

“I’ve only missed a few games over that time,” Mikulich said, “which is always a good thing when you’ve got people who sort of rely on you and count on you to be there. I was always there.”

“Oh, I’m definitely going to keep doing it as long as I can,” Mikulich said. “It’s one of the greatest things that’s probably happened in my life, to be honest.”

Mikulich has seen the highs and the lows of Pitt athletics over the past 35 years, but he has no plans on leaving anytime soon.

“Oh, I’m definitely going to keep doing it as long as I can,” Mikulich said. “It’s one of the greatest things that’s probably happened in my life, to be honest.”