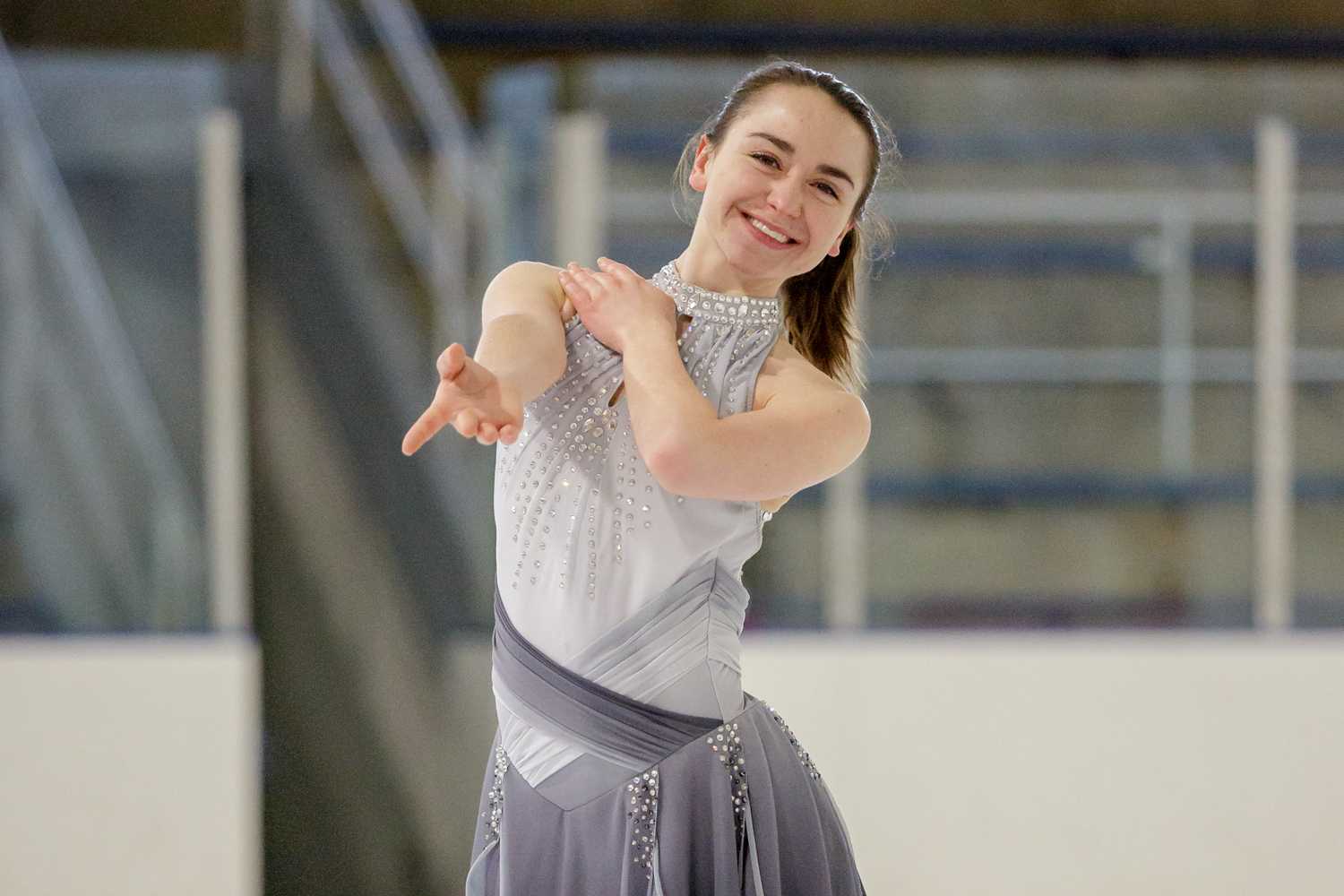 One can walk through the double doors at the Mt. Lebanon Community Center on any given Friday afternoon and find about a half dozen figure skaters practicing on the ice rink. The only interruption to the loud pop music played over the loudspeaker is the sharp cut of skates and the occasional thud of falling skaters hitting ice.

The skaters glide around on the fresh ice, practicing jumps, spins and footwork. Some are coaches or parents guiding middle schoolers and preteens through workouts and routines, but one skater stands out in particular — not just because of her age, but because of her skill as well.

Cara Murphy, a junior exercise science major at Pitt and nationally recognized figure skater, was clearly the oldest skater on the ice that Friday — and the best.

The 21-year-old slides around the ice in a gray dress with her short brown hair in a ponytail. She tries to mind her own space among the kids and parents who are also taking advantage of ice time, while working on spins, jumps and other moves that will aid her in competitions later this spring.

Murphy started skating when she was 6 years old in a group skating lesson at the Mt. Lebanon Community Center. Previously a dancer, Murphy found that her flexibility and rhythm transitioned seamlessly into figure skating.

“We have a community center with an ice rink and my parents wanted me to learn how to skate at the local program and it kind of took off from there,” Murphy said. “The coach of that program approached my parents and said, ‘She’s pretty talented. I’d like to work with her privately.’”

Little did she know where that conversation would lead. On that day, Murphy’s skating career was launched, much to the surprise of her mother, Anna Murphy.

“We didn’t expect it,” Anna said. “Basically, when she started, we just wanted her to learn how to skate. And we ended up signing her up for the group lessons and it really took off from there.”

The Mt. Lebanon Ice Center, located about a half-hour drive south of Pitt’s Oakland campus, has become Murphy’s second home. Even as she moved up the ranks of figure skating through high school and college, Murphy continues to skate on her home rink.

But it wasn’t until she traveled to an Olympic training facility at the University of Delaware in middle school and began working with high-caliber coaches like former Olympic bronze medalist Ron Ludington that Murphy realized she could have the opportunity to compete into her college years.

“For a lot of girls I grew up skating with, once they graduate high school, that’s really the end of their skating,” Murphy said. “But I had gone to Delaware and trained there. I saw that they had a really big collegiate skating program as well and I knew there were options in college for competition.”

Murphy knew she wanted to stay in Pittsburgh and continue skating, but it was difficult, considering how small and spread out the figure skating community is in the City. So she decided to create her own opportunity and took the steps needed to start Pitt’s figure skating club as soon as she got on campus in 2016.

She faced a number of obstacles, but none were bigger than having to recruit the necessary number of skaters. Murphy didn’t have the minimum 10 skaters needed to start an official student organization at Pitt, so she wasn’t able to make much headway in her first year.

But Murphy met graduate student Tenley Brownwright at the Robert Morris University Island Sports Center the following year. Brownwright, who was coaching at the same rink where Murphy sometimes practices, was more than willing to help out.

“I have known Cara since she started skating at the [RMU Island Sports Center] several years ago,” Brownwright said. “She is incredibly hard-working and has been a great role model for the younger skaters at the rink … Skaters in the [Pittsburgh Figure Skating Club] look to her as inspiration to work on their skating skills and presentation, and learn the value of hard work by watching her work ethic at the rink day in and day out.”

Brownwright helped grow Murphy’s network of skaters, and eventually the duo was able to recruit the necessary 10-person roster from Pitt’s student population during Murphy’s sophomore year. The paperwork, red tape and waiting were all worth it for Murphy.

“Honestly, I’m very glad that I did decide to keep skating, because these past two years have been really successful,” Murphy said. “I wouldn't have had those experiences or opportunities if I had stopped after high school.”

“Honestly, I’m very glad that I did decide to keep skating, because these past two years have been really successful,” Murphy said. “I wouldn't have had those experiences or opportunities if I had stopped after high school.”

In high school, she had moved up to the senior level of figure skating, which opened the pipeline toward regional, national and Olympic competitions.

Murphy competed at the Great Lakes Regional Figure Skating Championships last October. She finished fifth and was named an alternate for the sectional competitions, which was a “big deal” for a skater from the Pittsburgh area, according to Murphy.

Then, as Pitt’s lone representative, Murphy competed at the summer collegiate competitions, where she placed 11th in the country.

Preparing for these kinds of competitions includes monthly drives to the International Skating Academy in Canton, Michigan, to train with professional coaches, many of whom competed and won at international and Olympic levels. Murphy tries to makes the four-hour drive at least once a month, typically for a weekend so she can still be back in Pittsburgh for class, but will stay longer during extended recesses like spring break.

“I have no idea how she does it,” Anna said. “It’s pretty amazing, but she does fit it in each day and each week. She has a calendar that’s booked solid every week. My thing has always been education has to come first, so as a result, she’s always been an excellent student.”

Murphy also trains just as hard on her own. She practices three days a week, including twice on Fridays. Those practices are in addition to her regular fitness training.

Even though she is an accomplished skater, Murphy still knows what it is like to fall. On a Friday afternoon in March, as she’s practicing by herself, her attention shifts to a younger skater, who falls while attempting a leaping spin.

“I definitely think this is the time to pursue skating,” Murphy said. “Being an athlete, you do have a timeline as far as doing it while you’re young. So I think competitive skating will be the route that I choose. I’m just giving myself the opportunity to see if I can make it and push myself.”

“Usually I look just like that when my coaches are around,” Murphy said.

Besides improving in the present, Murphy is constantly thinking about where figure skating can take her in the future. Performance skating and shows on ice are ways Murphy said she can satisfy her itch to skate professionally, but she hasn’t limited her goals so early in her career. Competition skating, particularly for Team USA, is her highest aspiration.

Right now, as she heads into her senior year, her adviser has been asking her what she wants to do after graduation. Murphy’s pretty sure she’s made up her mind.

“I definitely think this is the time to pursue skating,” Murphy said. “Being an athlete, you do have a timeline as far as doing it while you’re young. So I think competitive skating will be the route that I choose. I’m just giving myself the opportunity to see if I can make it and push myself.”