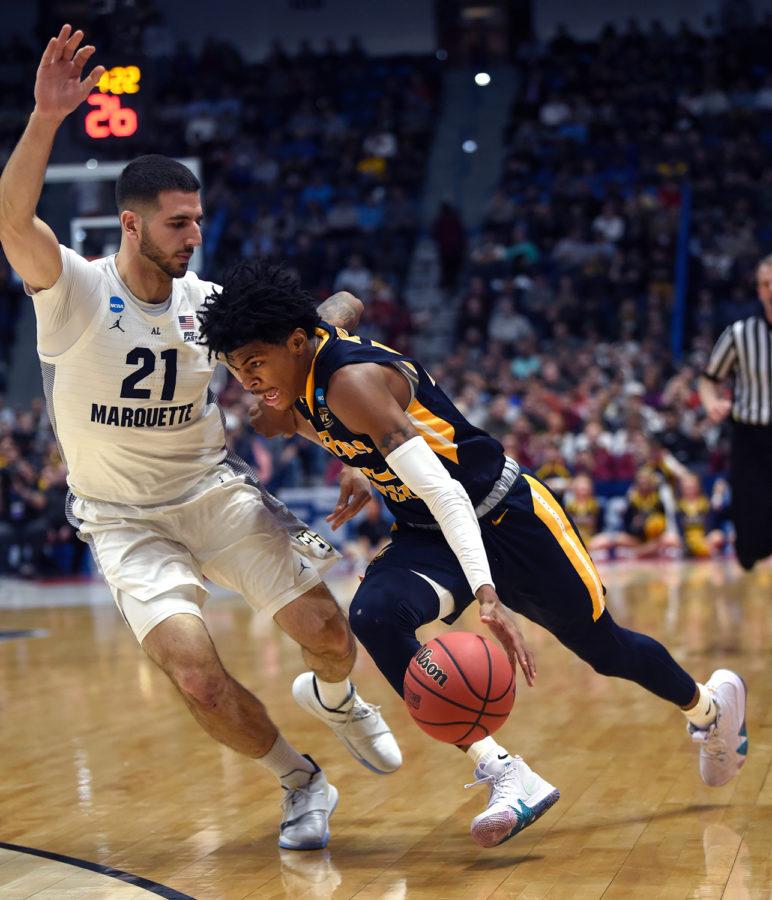 Murray State’s Ja Morant drives to the basket against Marquette's Joseph Chartouny (21) in the first round of the NCAA Tournament at the XL Center in Hartford, Connecticut, on Thursday. Murray State advanced, 83-64.

The NCAA March Madness tournament kicked off on Thursday, immediately giving fans a taste of the excitement that defines one of the greatest events in sports. While the games have not been as crazy as in past years, there have still been plenty of big plays, defining moments and spectacular finishes.

Sixteen teams are still alive with hopes of advancing to the Elite Eight. Before the next round starts this Thursday, here is a review of everything that has happened so far.

It’s been the consensus that Murray State sophomore Ja Morant is, at worst, the second-best player in college basketball this year. He got a chance to show it on the big stage when the Murray State Racers were given a 12-seed and matched up against Marquette. Morant did not disappoint.

Morant destroyed Marquette with an impressive triple-double on the way to Murray State’s 83-64 victory. Morant has been touted as more of a scorer this year, but it was his eye-popping passing ability that was on display in the first round. With 16 assists, the guard proved he can still impact the game when he isn’t putting the ball through the net. Oh, and he also climbed the ladder for this ridiculous cram to put an exclamation point on Murray State’s upset.

Unfortunately, Florida State put an end to Murray State’s run before it could really get going. But what may be Ja Morant’s last college game was one for the ages and could be a preview of a spectacular pro career.

LSU was able to hold off Yale in the first round, while Maryland narrowly escaped an upset by Belmont. Those victories led LSU and Maryland to play each other in the round of 32 in what looked like a potential early blowout, but required some late-game heroics in order for the Tigers to advance to the Sweet Sixteen.

LSU was in control for most of the game, but the Terps stormed back, erasing their 15-point deficit possession by possession. With the game tied, junior guard Skylar Mays nailed a heave from beyond the arc to give LSU its lead back. But shot after shot magically went down, allowing Maryland to tie things up. That’s where Tremont Waters came in.

With time winding down, the sophomore got the ball and took it to the rim. Blowing by one defender, he was able to scoop the ball off the backboard to give LSU the win.

Shockingly, that’s been the only buzzer-beater so far in the tournament, which just made Waters’ shot that much more exciting, finally giving viewers the save-the-day kind of play that makes the games worthwhile.

The Tigers have looked quite impressive two rounds in, mixing freak athleticism with skill, but they have also had a hard time holding onto big leads. They will get their toughest test yet against the Michigan State Spartans, led by star junior point guard and Big Ten Player of the Year Cassius Winston.

Duke, UNC, Virginia and Gonzaga were given the gift of a top seed going into the tournament. It’s no secret that this blessing can also be a curse, as every opponent is gunning twice as hard to take you down. Last year, only two of the top seeds made it to the second weekend. This year, all four have survived, displaying the prowess that gave them their rank. Gonzaga has looked strongest, with the other three appearing vulnerable at times.

First-half struggles have been a common theme for the three ACC teams. Duke got out of the gate slow, but crushed North Dakota State in the second half. The Tar Heels were down five at half before pulling away in the second half. Virginia looked to be on its way to a repeat of last year’s nightmare before a late first-half surge got it going.

The closest game of them all came on Sunday when the Blue Devils almost busted brackets against UCF. UCF played zone for much of the game, forcing Duke to shoot from deep, one of its few weaknesses. The game came down to one last possession for the Knights, when two layups rolled in and out, thwarting their upset attempt.

Virginia and UNC played better in their second games, but it’s become clear that each team has its work cut out for it to advance.

ACC foes Duke and Virginia Tech will face off for a rematch. The Hokies defeated the Blue Devils when Zion Williamson, who has put up 25 and 32 points in his first-ever tourney games, was hurt.

LSU now gets a shot at Tom Izzo’s Spartans. The Tigers will have their hands full with Cassius Winston, who went on an absurd 7-0 run by himself against Minnesota to halt its momentum.

Florida State took down the Ja Morant show, but it still stands to be seen if it can take down Gonzaga. The Seminoles’ stingy defense will look to stop one of the nation’s most potent offenses as the Zags try to advance to the Sweet Sixteen for the fifth straight year.

Texas Tech is standing in Michigan’s path to the championship. The Red Raiders shut down dark horse Buffalo while the Wolverines put a stop to the high-flying Florida Gators.

As for this being Virginia’s year, Oregon may have something to say about that. The Ducks have been a highlight reel of dunks and rejections after two stellar victories.

Tennessee and Purdue will battle it out for an Elite Eight berth. Carsen Edwards poured in 42 to take down the defending champs in Nova, while Grant Williams powered the Vols past Iowa in OT.

UNC and Auburn will be a fast-paced, up-and-down affair for the ages. The Tigers have won 10 straight, including an SEC title, while seniors Luke Maye and Cam Johnson are trying to will the Heels one step closer to a third title game in four years.

Houston and Kentucky both had their hearts broken in the tournament last year and one will have to endure another devastating defeat. Houston may have the upper hand with the Wildcats missing sophomore forward PJ Washington.