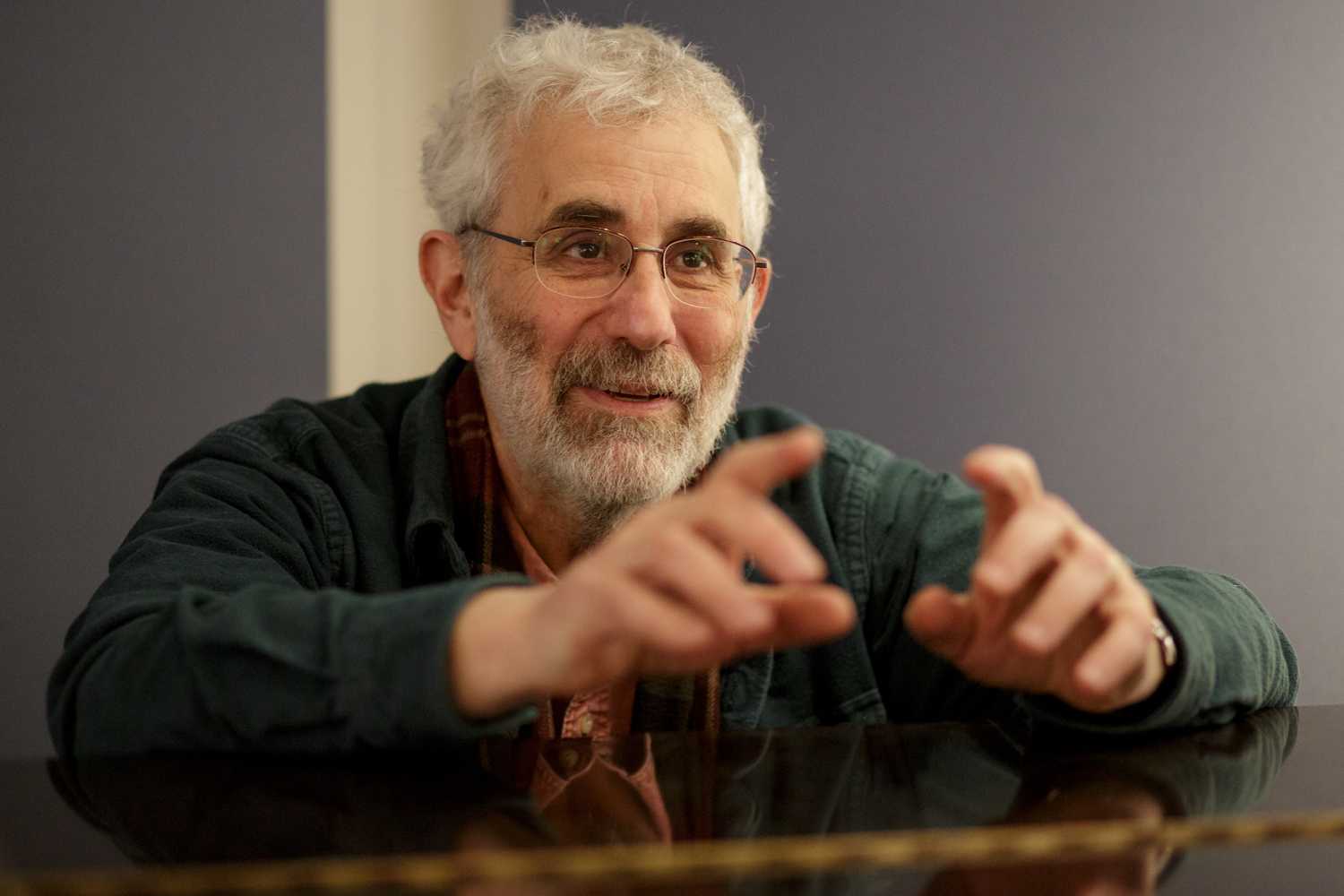 George Stetten has spent nearly a quarter of his life gathering an alphabet soup of degrees from world-class universities — including a bachelor’s degree from Harvard, a master’s degree from NYU, a medical degree from SUNY at Syracuse, a doctorate from UNC and some schooling from the New England Conservatory of Music.

“I like school. I never wanted to leave, and I haven’t,” Stetten said. “I don’t think I can survive outside of the university. I’m not a real-world kind of person.”

"I like school. I never wanted to leave, and I haven't," Stetten said. "I don't think I can survive outside of the university. I'm not a real-world kind of person."

Now a bioengineering professor, Stetten, a bearded, gray-haired man with glasses and colorful layered outfits, centers his life on his academic career at Pitt. But he doesn’t limit himself to any one focus. Instead, he takes every opportunity to branch out and explore his many different passions of researching, inventing, songwriting and educating — oh, and sci-fi novel writing, a skill he picked up while in medical school in 1989.

His book, titled “Weissenbaum’s Eye,” predates the movie “The Matrix” by 10 years. It focuses on the invention of a “simultron couch, a device that combines the computer, television and the telephone, [and] becomes a widespread object of addiction” — similar to the matrix in the eponymous movie.

His time in medical school also gave him the opportunity to invent. During the late ’80s, he developed a device that he calls the telemetric egg — a small, electronic egg-shaped device that was used to determine appropriate laboratory conditions for the incubation of an egg from a then-endangered bird.

“They wanted to be able to measure the conditions in the nest of a white-naped crane,” Stetten said. “So I built them an egg with a little radio transmitter and a bunch of sensors.”

This egg could measure its temperature at multiple locations, as well as how often it was flipped by the mother bird. What researchers found was that the temperature gradient across the egg mattered — the side closer to the bird’s rump was warmer than the opposite side, something they hadn’t yet replicated in laboratory incubation settings.

For his innovation, he was nominated for a Discovery Award in the environmental category in 1992. His project was a runner-up — the winner was the recyclable coke bottle, of which Coca-Cola produced more than 100 billion in 2016.

“That was a fun project,” Stetten said.

Among his other notable technical innovations is the Sonic Flashlight, a device that medical doctors can use to see under someone’s skin, for which Stetten won an award from Wired Magazine in 2003. The Sonic Flashlight is essentially a portable ultrasound device that projects the image onto a transparent display, allowing for precise alignment of a needle onto a vein, for example. He’s also gathered some almost-inventions along the way.

“My college roommate and I almost invented the touch-sensitive music synthesizer keyboard in 1974,” Stetten said. “We applied for a patent, and we were within a few months of the person who got it.”

Stetten and the students in his lab are currently working on two projects. The first is a mechanical device that amplifies the force that a surgeon feels when pressing on a scalpel, giving them more fine control over the force they apply to the skin. The other is a device that allows blind people to identify objects through a finger attachment, which uses computer vision to identify objects through a camera placed on a ring on the finger that vibrates when an object is detected.

But though much of his life focuses on his bioengineering research and teaching, Stetten is also an accomplished musician. He was a classically trained pianist starting from the age of 5, but transitioned to pop music in his early teens, forming his first band called Endozoic Algae.

“It was loud,” Stetten said. “We played ‘Satisfaction’ when it was a new song.”

He still writes and produces songs today as a solo artist, many of which are available to stream on his website. He’s proud of “Pittsburgh,” a song focusing on the natural and industrial beauty of the City — so proud that he sent the track to then-Mayor Luke Ravenstahl.

For Stetten, songwriting is a process. He focuses on one song at a time, sometimes working for more than a year on a single one to perfect it, starting with the lyrics and then focusing on the melodies. The lyrics give him the most trouble — his lyrics are like poetry, constrained by rhyme and rhythm.

“It’s like an equation, a simultaneous equation,” he said.

He’s gotten stuck on lyrics before, but he thinks lyric-writing is more like “mining” than “inventing.” Eventually, he’ll find the right words. One time, he found the lyrics while in the shower — and heard them in the voice of Bob Dylan.

“I was thinking, ‘That’s kind of corny,’” Stetten said. “Then I thought, ‘That’s actually pretty good, Bob, you know, get out of my shower, but …’”

His focus now lies in a recording studio on Pitt’s campus he calls the Music Engineering Lab, or MEL for short. The MEL is tucked away in the back corner of the third floor of Benedum Hall. It’s a small room, only about 200 square feet, but what it lacks in size it more than makes up for in musical production capability.

“Peter Stumpf, the guy who tunes the piano tunes for the Symphony,” Stetten said. “He says this is the highest-quality studio per square foot in the City.”

The MEL has a wide assortment of instruments and sound-recording equipment, including a 1937 Steinway grand piano, an electric guitar, a bass, an electronic drum set, many microphones and complex recording software.

Stetten uses this state-of-the-art technology in a class available primarily to engineering students about the history of music recording and basic songwriting techniques. Alan Degenhart is the other instructor for the MEL class, and said Stetten cares most about giving students the freedom to be creative in the studio.

“Students always have a lot going on,” Degenhart said. “It’s meant to be something that’s fun, that can kind of be a little bit of a distraction when needed from the rigors of coursework.”

He said the overall goal of the class is just to get students into the process of creating music. Degenhart and Stetten provide the basics and teach them about topics in class, and students do the rest.

“We try to show the students the ropes,” Degenhart said. “But so much of music is an art, and is very personal. We’re not professionals — we just give them the keys to the room and let them go wild.”

Of course, students never go too wild. The room is almost always in pristine condition, just with some drawings of Spongebob on a whiteboard. And janitors don’t even clean it until the end of the semester — all of the maintenance is done by students.

Degenhart said Stetten’s excitement about the material covered in the course comes out when he lectures on topics that he has personal experience in, such as electronic music, something that students can produce in the MEL.

“It’s hard for someone to have that much knowledge about something and not be passionate about it,” Degenhart said. “The fact that someone is able to communicate those details about the history of electronic music … It definitely shows his passion for it.”

Jake Donovan, a senior bioengineering student, agrees that Stetten’s passion for his life focuses comes out in lectures. Donovan took one of Stetten’s bioengineering classes during his sophomore year and joined his lab afterwards.

“I shot him an email and he told me to just start coming by,” Donovan said. “He gave me the code to his lab and just told me, ‘Start hanging out.’”

"[The goal is] for them to have fun playing music and have a little delusion of grandeur that they might be a rock star," Stetten said.

Since then, he’s worked on improving some of the items Stetten uses in his bioengineering curriculum, like the microprocessors the bioengineers use to learn about circuitry. But Donovan said Stetten’s lectures don’t need improvement. In fact, Stetten makes his lectures highly accessible by teaching as though he were a student, explaining little details that professors might miss along the way.

And in addition to providing fascinating lectures to his bioengineering students, Stetten also gives his MEL students a place to explore their own creativity, the same way he continues to explore his in music and beyond.

“[The goal is] for them to have fun playing music and have a little delusion of grandeur that they might be a rock star,” Stetten said.

A previous version of this article incorrectly stated Stetten received a degree from the New England Conservatory. He instead received some schooling.