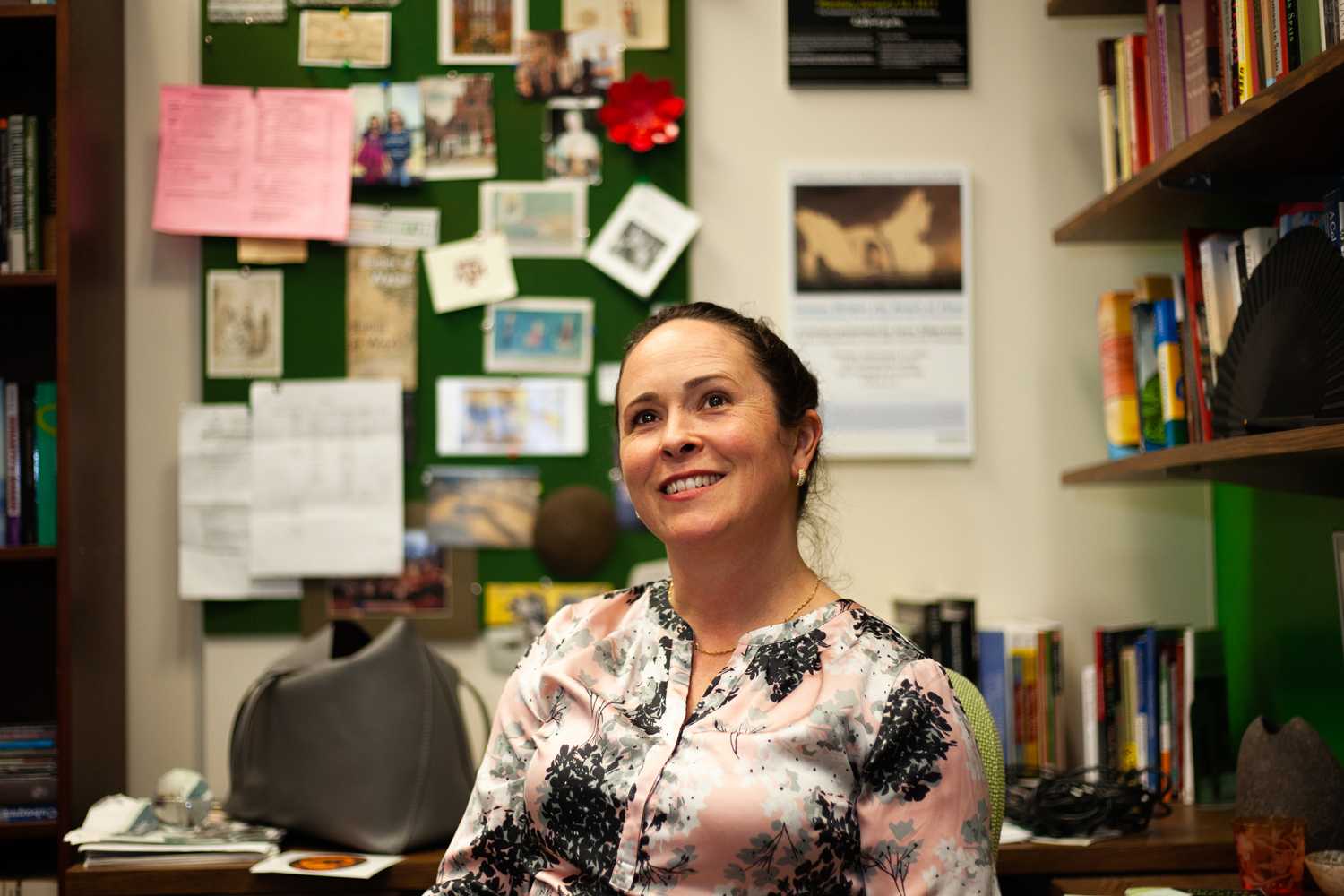 Molly Warsh: Professor with a pearl

If you walk inside Molly Warsh’s office, you’ll find yourself sitting amongst shelves of books. Stacked high but meticulously organized, volumes of nonfiction on every category of world history, novels, a book of essays Warsh edited with her dissertation supervisor and even her own book, “American Baroque: Pearls and the Nature of Empire,” line the walls. One of her favorites is a skinny children’s paperback with colorful pages: “Are You My Mother?”

“Are You My Mother?” is the story of a baby chick who goes on a quest to find his mother. On his humorous journey, he asks every animal he meets if it is his mother, though he doesn’t feel quite right with the dog, kitten, hen or boat. When he finally does find her, he can feel it in his heart — he is home.

That’s how Warsh felt when she arrived at Pitt. After earning her doctorate degree in history from Johns Hopkins University in 2009, Warsh accepted a job as an assistant professor of history at Texas A&M University. But she wasn’t satisfied with what she was teaching.

“I’ve always had a funny profile as a historian,” Warsh said. “I’m not clearly one kind of historian or another. I’ve had very broad training, and it was hard for me to find a job that was a perfect fit, something that would range as widely and let me have all of my enthusiasms.”

When she saw the job posting for a world history position at Pitt, she knew that it was the right fit for her.

“When I gave my job talk interview [for Pitt], I said that when I saw this job, I had that feeling of ‘are you my mother,’” she said. “Later, when I was hired, my colleague gave me a copy of that book.”

She has been at Pitt since she was hired in 2012, and is now not only an associate professor of history, but also the associate director of Pitt’s World History Center. She said at this point her office is like her second home. On her bookshelf, she keeps a line of small trinkets that make her happy — some of which inspired her book on pearls.

“I joke that this is my little shrine area to my eclectic interests. I have a random fake Spanish gold coin and a real piece of an ancient wall my friend gave to me,” she said, pointing to the small items.

But her favorite item in the shrine is a small figurine she found while visiting Venezuela, an integral area she studied to publish her book on pearls. Since the most abundant research archives on pearl diving are located in Spain, Warsh did most of her research on the book there. She didn’t get to visit Venezuela until she had finished her research, which made the trip even more special.

“I finally got to go to the Pearl Islands, and when I was walking on the beaches, I found this,” she said, smiling at the brown piece of clay shaped like a tube. “I’m always like, it’s an ancient piece of artifact, which it is, I just don’t know of what.”

Molly started her book about pearls after graduating from Johns Hopkins in 2009, but the work began long before then. When she was researching possible subjects for her thesis, she knew that she wanted to do something about crossing borders. Her adviser suggested doing it on agricultural products, but she didn’t think it matched her objectives.

“A commodity study wasn’t too interesting to me. People had already written about the big ones from the Americas like silver and sugar,” she said. “But then my dissertation supervisor asked, ‘What about pearls?’”

“A commodity study wasn’t too interesting to me. People had already written about the big ones from the Americas like silver and sugar,” she said. “But then my dissertation supervisor asked, ‘What about pearls?’”

But she wasn’t that intrigued. She didn’t have any special feelings about pearls and didn’t want to be called “The Girl with the Pearl” for the rest of her life, which she meant as a reference to the famous painting by Dutch Golden Age artist Johannes Vermeer.

But that summer, she went back to Spain and dug around the ancient archives, simply looking for interesting documents. She read a document about the labor of diving for pearls and was shocked at the brutality it entailed. The diving was conducted by free and semi-free indigenous peoples, as well as enslaved Africans. As soon as she read the document, she realized the story is as much about people as it is about pearls. And that was how the nine-year process of writing her book began.

It finally came out in 2018. In the meantime, shortly after her graduation in 2009, her dissertation professor Philip Morgan reached out to her and asked her if she would like to edit an anthology of essays about early North America in global perspective.

“Molly was the perfect co-editor: she combines a brilliant mind and strong organizational skills with omnivorous reading and eloquent prose,” Morgan wrote in an email. “She also has great judgment and sensitive interpersonal skills, and an effervescent, exuberant personality.”

Warsh is dedicated to her work as a historian. She is fluent in both Spanish and Portuguese, knows conversational Greek and can read French and all of the other romance languages. She said she plans to travel everywhere as long as she can learn something and loves studying amongst other people.

“I would say that at the heart of who I am as a historian, and really the heart of how I teach, I’m really interested in people, and how they make their way in the world, and thinking about how that changes and stays the same over time depending on context,” Warsh said.

“At the heart of who I am as a historian, and really the heart of how I teach, I’m really interested in people and how they make their way in the world.”

Her most popular class at Pitt is a called History of Piracy. To explain the class, she picked up a pile of brown scroll paper with doodles of pirates and a list of characteristics that her students made on it.

“I want to make a pirate gallery with these things,” she said. “We examine what it really means to be a pirate, and who could be a pirate. You know, pirates aren’t just white guys on ships. If you’ve illegally downloaded a movie or music, you’re a pirate.”

Warsh found her deep passion for history thanks to her brilliant college professors that took her under their wings. She hopes to do the same for her students — and some of her students, including Jennifer Motter, a history major, think she has.

“Molly is just as enthusiastic of a person as she is a scholar,” Motter said in an email. “She wholeheartedly engages with the Pittsburgh community, her students and other scholars as she does with her research. And you can see this with all the functions she organizes, her always busy office where many students just pop by to chat with her and of course, her recently published book.”

This summer, she’ll return to Spain to visit old friends and complete two weeks of research. But she won’t return to Pitt until the fall of 2020.

Instead, she’ll be diving into the Huntington Archives in Los Angeles, where she has a nine-month fellowship to do research for her next book, which will examine migration. When she returns to Pitt, she hopes to teach a class based entirely on her new research.

But even while living in Los Angeles, Pittsburgh will always be her home. Her husband, Piotr Gwiazda, a faculty member in the English department, will stay at the University of Pittsburgh.

Her enthusiasm makes choosing a favorite traveling memory nearly impossible, though she says one of her favorites happened on a trip to Scotland a few years ago while she was finishing up the last bits of research for her book on pearls. She eventually made her way to a small town, and a local put her in touch with a man they felt would be able to help her.

She finally sent him an email, and the next day, the two met. She expected a simple sit-down conversation, but instead, he took her on a hike through the Scottish countryside, through old Scottish traveler footpaths. She remembers admiring the beauty of the rivers while he spoke about the history of pearl-searching within them.

“It was one of the most magical experiences ever,” she said. “I had a lot of adventures writing the first book. And I hope even more come with the second.”