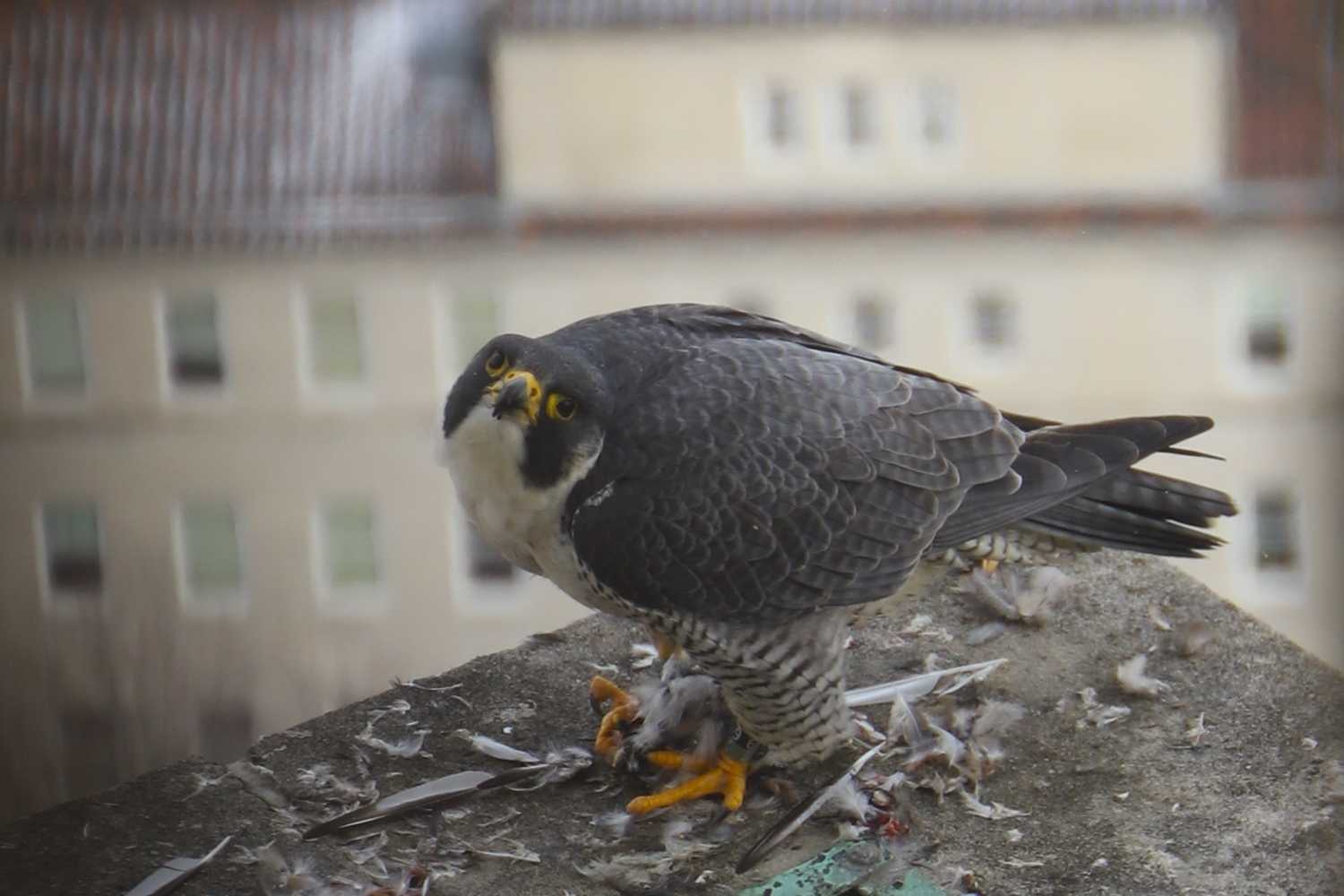 Hope laid the fifth egg a little after 6 in the morning on the first day of spring 2019.

This was unprecedented. She had produced exactly four eggs, like clockwork, every March since she had taken over the nest on the balcony outside the 40th floor of the Cathedral of Learning. Her followers were amazed — first the devotees watching the 24-hour Falcon Nest Cam trained on the nest who sounded the alarm, then the bird bloggers who posted excited updates to their websites and social media and then the hundreds of people who followed them.

Only Hope remained unfazed. Hunched over her eggs with a dark, yellow-rimmed eye turned outward, she waited calmly for her mate, Terzo, to arrive for his shift.

When he did land on the nest, greetings were perfunctory. The two, like most peregrine falcon pairs, don’t feel the need to see much of each other outside of courtship rituals and the occasional shared meal. Terzo assumed his place on the clutch of five eggs and Hope took off, a gray blur winging her way down past the windows of floor after floor of offices as she set off in search of prey.

Hickling’s position in the Honors College places her office on the 35th floor of the Cathedral, where the peregrines fly by her window almost every day. Sometimes she takes seeing them as a good omen for the day, she said. In native cultures, falcons symbolize strength, vision and freedom. Hickling has a small dove tattooed below her left collarbone, and has toyed with the idea of getting a falcon on the right to match.

Hope moved in at the end of November 2015, a few weeks after her elderly predecessor, Dorothy, flew off forever. It was a peaceful transition of power compared to the bloody battles that sometimes occur when a new falcon shows up at a nest, but those familiar with Hope know better than to think she has a gentle nature.

After all, every spring that she’s laid her eggs at the Cathedral, she’s killed and eaten between one and three of the chicks that hatch. And that’s really, really abnormal.

“The drama of the relationships and the children and who lives and who dies and who gets eaten and who’s mating with who...” Hickling said. “I think someone should write it up as if they’re human relationships, like ‘Game of Thrones’ or something.”

"The drama of the relationships and the children and who lives and who dies and who gets eaten and who’s mating with who … Someone should write it up as if they’re human relationships, like ‘Game of Thrones’ or something."

Blood. Poison. Incest. Adultery. Infanticide. The multi-dynasty history of the peregrines on the Cathedral could hold its own against anything on HBO. And it goes back further than Hope or even Dorothy.

In the years following World War II, DDT and other pesticides sunk into the earth and then shot up the food chain until they infiltrated the diets of falcons and other birds of prey. The poison built up in the birds’ systems, and the females began to lay thin-shelled eggs that broke before the chicks could hatch. Soon, peregrine populations plummeted.

Rachel Carson’s 1962 book “Silent Spring” brought to light the devastating effects pesticides had on the natural world. The title of the book called up a bleak image of nature gone anemic — a world where no birdsong could be heard.

Three years later, peregrines were extinct east of the Mississippi, and environmental groups began trying to bring them back. But it was more difficult work than destroying them had been. For one thing, there are only so many vertical, inaccessible cliff faces available for falcons to nest in. So the birds turned to cities, which hold tall buildings or bridges where the birds wouldn’t be disturbed.

That makes Pittsburgh a city full of prime nesting locations. There are now eight active peregrine nesting sites in the City, and the lofty, private Cathedral of Learning — which stands taller than all other buildings in its immediate area — is the most highly coveted.

The first to arrive at the Cathedral was Dorothy, hatched in Wisconsin, who came to Pittsburgh in 2001 and tried to nest on the Cathedral with her mate, Erie. Kate St. John, the then-director of information technology at WQED, pushed Pitt, the Western Pennsylvania Conservancy and the Pennsylvania Game Commission to install a box outside the 40th floor with the gravel that the peregrines need to nest.

Dorothy was an “amazing matriarch,” St. John, the local expert on the falcons, said. Over the course of her 14 years at Pitt, Dorothy helped 43 chicks leave the nest, and her offspring, which are given identifying leg bands by the Pennsylvania Game Commission when they’re fluffy white chicks between 23 and 30 days old, have been tracked as far as Ontario.

In fact, one of her descendants came back to the nest years after it had left. When Erie departed the nest in 2007, never to return, a new male appeared and began courting Dorothy. He was nicknamed E2, the second Erie, by St. John and other local birdwatchers.

“What’s crazy about this … we didn’t say much at the time,” St. John said, shaking her head. “But he was Dorothy’s grandson.”

It’s not that weird, she said. Really. Falcons don’t know who they’re related to.

St. John’s blog, “Outside my Window,” demystifies the peregrines’ activity for a devoted group of readers year-round. But there’s one thing she can’t explain, because no one understands the reason for it. Why does Hope eat her chicks?

The best explanation St. John can offer is this:

“Not everybody’s a good mother,” St. John said. She shrugged. “It’s true of peregrines as well as humans.”

Although E2 fathered Hope’s children in her first year at Pitt — the year she killed and ate three out of four — he died before they hatched, apparently hit by a car in Friendship. But there’s never a vacancy at the nest for long. A new male appeared within a month.

“He didn’t have a name. Our tradition in Pittsburgh is that the main monitor, the person who watches him the most, they get to name the bird if they want to,” St. John said. “So I named him Terzo.”

Because he was the third.

“And because,” she said, and paused. “One of the problems when you give them an anthropomorphic name is that people think they’re people.”

“When you give them an anthropomorphic name ... people think they’re people.”

Many commenters on St. John’s blog take a break from checking the falcon cam around the time the eggs hatch so they won’t have to watch the act of cannibalism take place, and others say Hope’s habit has put them off watching the falcons completely. Still, when May comes and Hope and her mate begin to teach the surviving children how to fly, there will be a few dedicated watchers under the tent in Schenley Park every day, hoping they’ll catch a glimpse of a young falcon taking off.

When Pete Bell first came to Pitt as a graduate student in 2002, he figured he’d never be one of those people. The falcons were neat, but he was just a casual fan. Sometimes, when he had a free hour that wasn’t filled by research, he’d take a camera out to Schenley to try and get a good picture of one flying.

Then, somehow, he found himself with so many pictures of the falcons that he had the idea to create specific social media accounts to share them. Now a chemistry lecturer at Pitt, Bell posts updates as @pittperegrines on Twitter, Facebook, Instagram and even Reddit.

“I wanted to make the peregrines accessible. Other places you’d go for data, they would use the jargon of peregrines,” Bell said. A peregrine’s nest is called a scrape, and a baby is called an eyass. He spelled it out. “E-Y-A-S-S. Why use that? It’s a baby peregrine falcon or it’s a chick. If you use one of those words, everybody will understand it.”

Peregrine falcons have undergone one of the most successful repopulation efforts in history: the falcons are no longer on the U.S. endangered species list, though they’re still considered endangered in Pennsylvania. Soon, St. John said, the population in Pennsylvania will be large enough that the state game commission will stop banding individual birds to identify them.

Without the bands, it’s next to impossible to tell one peregrine from another — it’s even difficult for the casual observer to distinguish between Hope and Terzo, though female peregrines are slightly larger than the males. In the future, unbanded peregrines will come and go with no one keeping track of their family tree.

The idea makes Hickling a little sad, she said, looking out the window, though perhaps it’s for the best.

“If they stopped banding them, we’d stop being able to have our little soap opera where we know who everybody is,” she said. “But maybe that’s not our business. Maybe that’s their own soap opera. It’s okay for humans to not know every individual peregrine and have a name for them … But it is fun.”