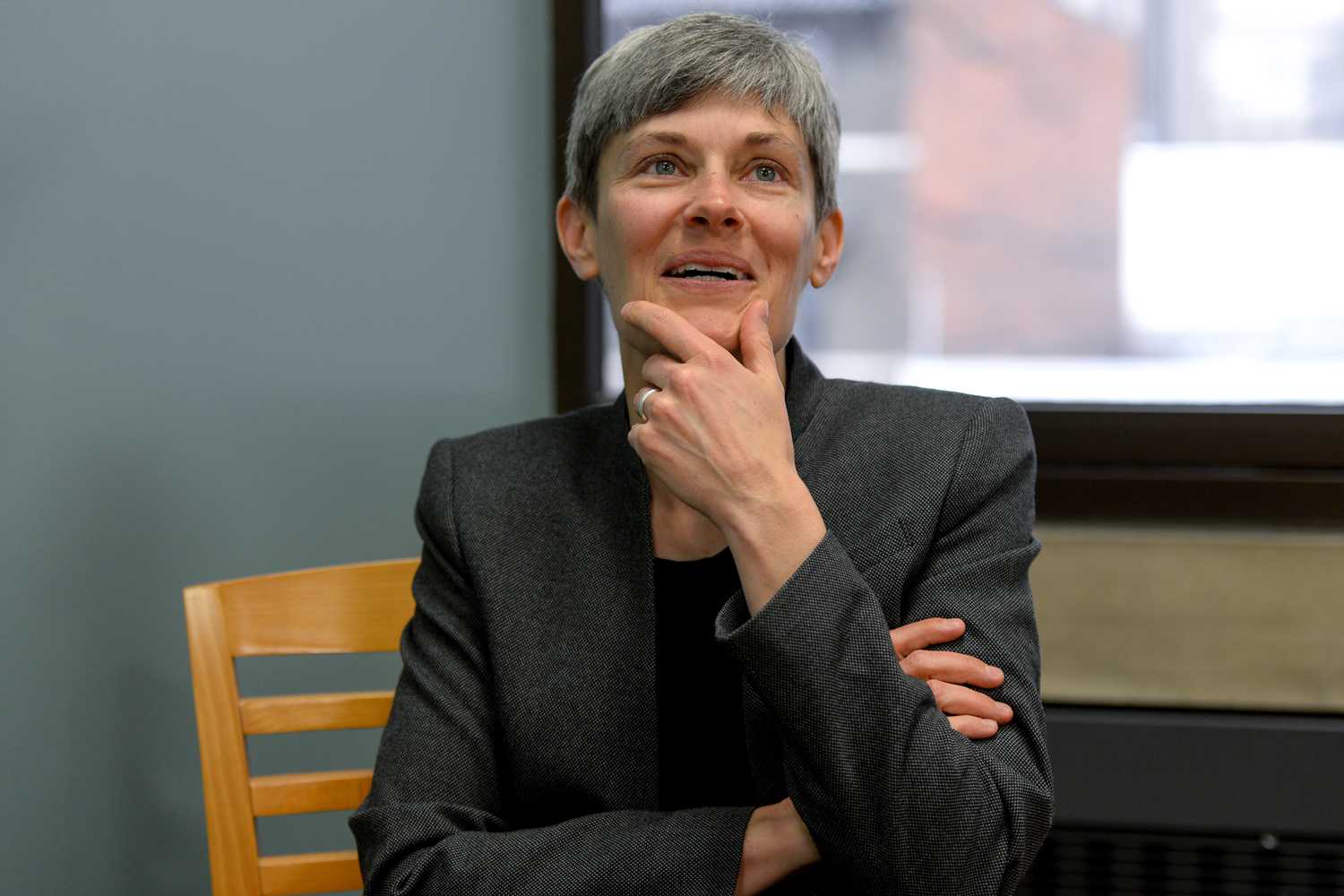 Whether it’s being the dean of a highly ranked law school, figuring out how to create a sustainable university or serving as a law clerk in America’s highest court, Amy Wildermuth has always put an emphasis on being open to whatever opportunities may come your way.

As a result, she’s been pleasantly surprised with where life has taken her. She's done so by living by what her parents instilled in her: to do the best job you can, no matter what job you have, because you’re lucky to have a job.

“If you had asked me a year and a half ago, would I ever live in Pittsburgh, I would've said no,” she admits. “I didn't see that on the horizon. I think it's probably more significant in my life that I've had this openness.”

Wildermuth, a 46-year-old woman with an angular haircut and athletic build, has since moved to Pittsburgh. She became the dean of Pitt Law in July 2018. She entered an already successful law school, but between dealing with a drop in student applicants and the need to attract students with high-quality statistics, it hasn’t been an easy job.

Law school metrics are largely based on that academic year’s admission criteria, including GPA and the LSAT, which are what most schools in the United States base rankings on. What Wildermuth and her committee care about alongside the metrics are resilience and persistence, which directly contribute to the success and happiness of the students.

To ensure all Pitt Law students have the best chance at success post-graduation, Wildermuth has worked to shrink the incoming class by about 15 students. It may seem like a small number, but is necessary to ensure each student is not scrambling for job opportunities post-graduation and that more financial aid is available to each person enrolled.

She spends time at least twice a month with law firms in downtown Pittsburgh to survey industry professionals and make sure she understands the ever-changing field.

“They are the future employers of our students and they know how the legal profession is changing and what we should expect,” Wildermuth said. “They are what will give us an advantage in becoming the forward-looking, 21st-century law school that we want to be.”

The Chicago-area native attended Washington University where she earned her Bachelor of Science in engineering and policy and Bachelor of Arts in History in 1994. After, she attended the University of Illinois and graduated with two degrees once again — this time, with a law degree and a master’s in environmental engineering.

She spent the next two years clerking for two different U.S. circuit court judges before returning to the University of Illinois to teach for the 2000-01 school year.

“I always loved school. I always had a great time,” Wildermuth said. “And you know, now I think back, and I think to myself, ‘Of course you ended up in a law school all the time, you loved it.’”

“I always loved school. I always had a great time,” Wildermuth said. “And you know, now I think back, and I think to myself, ‘Of course you ended up in a law school all the time, you loved it.’”

After finishing a year at Illinois, she was asked to spend a year as a visiting professor at the University of Utah, and then secured a position clerking for Supreme Court Justice John Paul Stevens in 2002-03.

But Wildermuth had left her mark on the University of Utah. In 2003, David Pershing, the president emeritus of the university, visited Washington, D.C. to try and bring Wildermuth back to Utah.

“My first impressions were that she was a young, rising star,” Pershing said. “From the beginning, it was clear to me she was special.”

Wildermuth knew by then that she wanted to continue teaching, and Pershing made her an offer for a permanent position in the spring of 2001. She had loved working at her alma mater, but Illinois couldn’t compete with Utah for one simple reason: health care for her partner Gwen, who was a professional snowboarder at the time.

“I went in [to Pershing’s office], we had a little chit-chat and then he said, ‘Okay. What do you need to come here?’ And I said, ‘I need health insurance for Gwen,’” Wildermuth said.

She remembers taking a deep breath. She was asking for benefits for her same-sex partner in the early 2000s, at a time when such rights weren’t available to couples like them in several states.

“He said, ‘Done. What else do you need?’” Wildermuth recalls.

That was all she needed — she hadn’t even come to the meeting with any other requests. To Pershing, it seemed like a no-brainer.

“It was clear to me this is where the future was going, and to be a major research university [providing better benefits] couldn’t be a question,” Pershing said. “We had to have been able to make it work for our young faculty.”

In 2011, Wildermuth transitioned into the position of associate vice president, a stark contrast from teaching and researching in the law school. Now, her problems were even bigger, as she had to manage and direct the big-picture aspects that make law schools successful.

She also took on the responsibilities of chief sustainability officer in 2013, with goals to make Utah a more sustainable university. Wildermuth pushed for better water usage standards, more sustainable landscaping methods and introducing forms of sustainable energy. She even oversaw a significant shift from a reliance on coal-generated energy to solar, wind and geothermal energies.

“She was clearly our utility infielder,” Pershing said. “When there’s trouble, you go get Amy. She’ll help us figure out how to get out of it.”

Wildermuth has always been passionate about the environment, something she traces back to her parents’ midwestern sensibility and awareness of how to use resources. She remembers taking trips on Saturdays to the recycling yard, the family car full of empty cans and old newspapers. She also remembers summers spent at her great-grandmother’s house on a lake in northern Wisconsin.

Environmentalism was a value her parents passed to her, just like kindness and integrity. It wasn’t a lifestyle. It wasn’t trendy. It was just how they lived.

“They just thought that was what every citizen should be doing,” she said.

And Wildermuth has that same sensibility her parents had. While in Utah she lived in a house that used energy generated by solar panels, and started driving an electric car to limit her own environmental footprint.

After spending 15 years at the University of Utah, Wildermuth decided it was time for a change. Pitt Law’s previous dean, William Carter, stepped down in 2018, leaving the position open. At the time, law schools across the country were struggling with a decrease in applicants and Wildermuth was interested in finding creative ways to remedy the situation.

“When it came down to it, Pitt was ready to do the kinds of things that I was really interested in. I was just really fortunate to end up with the opportunity,” Wildermuth said.

“When it came down to it, Pitt was ready to do the kinds of things that I was really interested in. I was just really fortunate to end up with the opportunity,” Wildermuth said.

And since she arrived, she’s been hard at work tackling the problems facing law schools today. Her colleagues, including Vice Dean and professor of law Haider Ala Hamoudi, recognize her expertise and ability to enact meaningful change.

“She combined a very clear vision and purpose in terms of what she wanted to do with a lot of flexibility and willingness and, in fact, desire to listen,” Hamoudi said.

Although she’s not directly involved in Pitt’s sustainability efforts, she works closely with Pitt’s first-ever director of sustainability, Aurora Sharrard, to make sure the law school is supporting and implementing the University’s efforts.

Contrary to her continued and wide success, Wildermuth considers herself to be more of a helping hand that goes with the flow when it comes to problems, rather than the mastermind behind solving them. She continues to be open to any other opportunities that may come her way.

“Before I left Salt Lake City, I was offered a job at the Macy’s,” Wildermuth said. “For a brief moment, I thought I could do Wednesday nights and Saturdays for a few shifts. You never know, you always want a backup plan.”