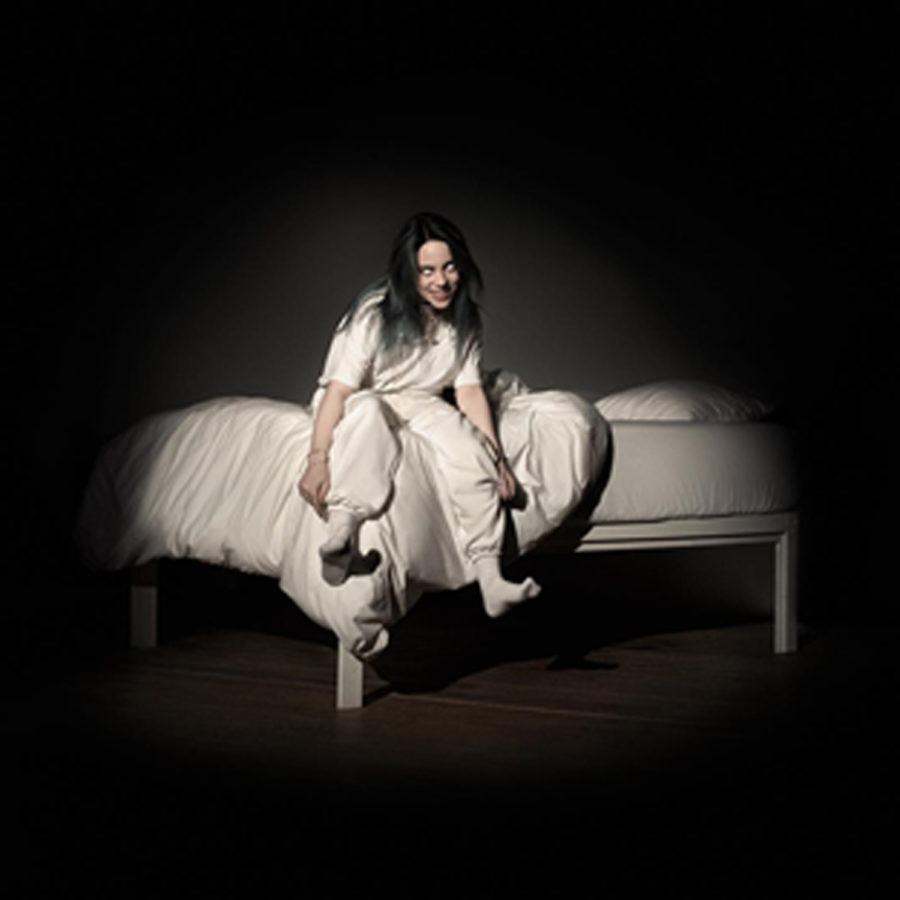 “WHEN WE ALL FALL ASLEEP, WHERE DO WE GO?” album cover.

Minimalistic bass beats, breathy vocals and moody lyrics carried LA-native Billie Eilish from an internet streaming sensation to No. 96 on the Billboard Hot 100. Released when she was just 15 in 2016, Eilish’s first single “Ocean Eyes” now has 16.2 million streams on SoundCloud alone.

Foo Fighters frontman and former Nirvana drummer Dave Grohl is a self-described fan, who compared Eilish’s popularity as the “same revolution” that happened to Nirvana when he was the same age as his daughters and Eilish.

Eilish’s debut album “WHEN WE ALL FALL ASLEEP, WHERE DO WE GO?” released Friday, follows the success of single “Ocean Eyes” and the 2017 EP on which it appeared, “dont smile at me.”

The style of music on the album is varied, a deliberate attempt on 17-year-old Eilish’s part to create an album where fans of any kind of music could find a song they liked. Eilish also partnered with Spotify to develop a museum-like exhibition for the album, which reflects her synesthesia, a brain condition that causes her to see colors or smell when she listens to music.

Eilish, who cowrites with her older brother Finneas O’Connell, has a brand of sort-of goth pop, mixing influences from pop and hip-hop with dark lyricism and the occasional sound effect or vocal distortion. “bad guy” is a fan-favorite that shot right up to the top of Eilish’s top songs on her Apple Music page. The song relies on techno beats and pithy lyrics, like when Eilish adds a cheeky “duh!” just before the beat drops in the chorus.

One of the singles, “bury a friend,” capitalizes on Eilish’s edgy reputation, asking the titular question, “When we all fall asleep, where do we go?” The song is deliberately nightmarish, with distorted vocals, sometimes sounding like Eilish is underwater and high-pitched screeching sounds that are eerily similar to the violin music used in Alfred Hitchcock’s “Psycho.”

The single “when the party’s over” is stripped down and uses the piano, an instrument not featured much on the rest of the album. Here, Eilish’s talent is evident. Take away almost all the instruments and production, and she is still an incredibly talented artist. “when the party’s over” is tonally similar to “Ocean Eyes,” and Eilish sounds almost painfully sad. Her impressively high vocal range often makes her sound like she is crying.

But at times, the album comes across as corny and pandering. “my strange addiction” opens with dialogue pulled from the U.S. version of the TV show “The Office” for seemingly no reason. The audio is from an immediately recognizable moment in the show, when Dunder Mifflin Regional Manager Michael Scott (Steve Carell) is showing his coworkers a movie he made and starred in, specifically a scene where the main character teaches others how to do a dance called “The Scarn.”

“The Office” is a huge hit with teenagers including, presumably, Eilish. But there is little that connects the hilarious Scarn scene with the music, other than when a character named Billy is addressed by name. But “my strange addiction” employs the same lyricism and vocalization as much of the rest of the album, and that is where the song really shines.

While Eilish may have a hard time striking complete balance between goofy youthfulness and taking herself too seriously, that’s not to say she doesn’t have the authority to handle more mature themes. Eilish is a teenager writing for teenagers, and when adults want to write that off, she’s there to defend herself and her generation.

“When older people say, ‘What do you know about things like love?’ I know more about it than you do because I’m feeling it for the first time right now, whereas you haven’t felt that for a long time,” Eilish said in an interview with NME. “That doesn’t mean it is any less powerful, but it is definitely a different feeling.”

“It’s something I’ve lived with my whole life. And everybody knows, everybody in my family, all my friends, all the people that are closest to me know I have it,” she said. “And I just never said anything because I didn’t want that to define who I was.”

In some ways, Eilish is like any other teenager, incredulous when considering artists such as Paul McCartney are fans. Listening to her interviews, you cannot help but be endeared by Ellish’s wordless excitement that Justin Bieber now follows her on Instagram, or laugh at the way she stops midway through telling a story to compliment Degeneres’ eyes.

Not everything on “WHEN WE ALL FALL ASLEEP, WHERE DO WE GO?” is for everyone. But that’s probably the point. Eilish doesn’t need to be liked by everyone, despite wanting to write music with enough diversity to be enjoyed by all. Her music is a reflection of all of her — her synesthesia, her Tourette’s syndrome, her age, her experiences — all in a musically diverse and enjoyable package.