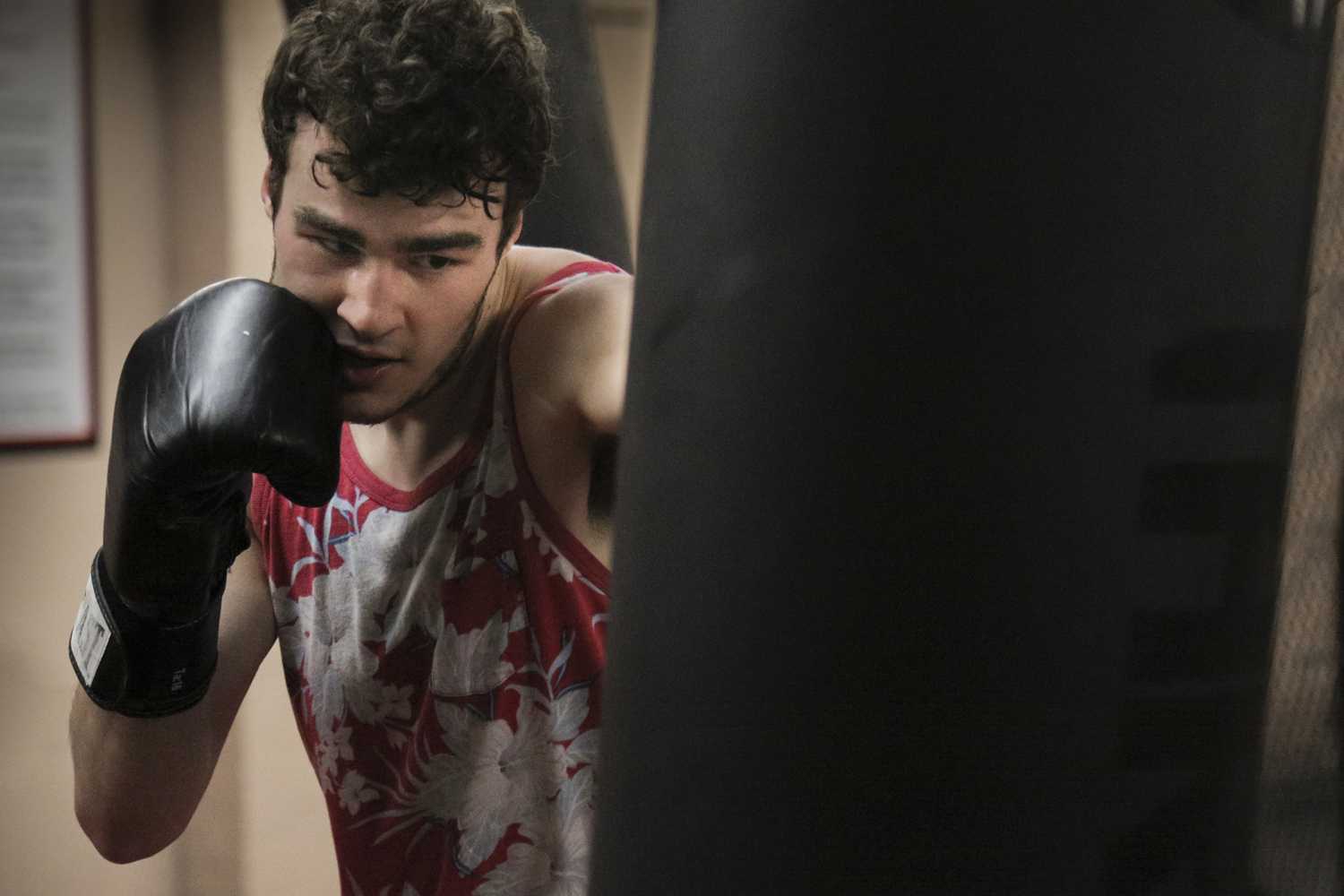 While he was growing up in the Pittsburgh suburb of Upper St. Clair, Ross Holub was of the quieter nature.

“He was very thoughtful and sweet,” his mother, Sharon Holub, said. “Not the type of person you would think would be into a sport that is basically people beating each other up.”

Holub does not come across as a fighter. While athletic, he isn’t some hulking specimen. He’s about 5-foot-10 and 150 pounds, with an upbeat smile and curly brown hair. Nor is he exceptionally assertive. Holub’s demeanor is cool and smooth, every word thoughtfully chosen — as an English writing major concentrating in nonfiction, he knows their power. It’s easier to imagine him kicking back with a book in Hillman rather than punching another human being in the face.

Yet Holub, now 21, found a passion for the sport of MMA his first year of high school, when his guitar teacher showed him a video of an MMA fighter named Anderson Silva, who at the time was thought to be the best fighter in the work. MMA pits fighters against each other in an octagon-shaped cage, where they utilize a combination of different styles of fighting, including wrestling, boxing, jiu-jitsu, judo and muay thai.

“Growing up watching fighting anime shows like Dragon Ball Z and Naruto, I thought, ‘This is perfect,’” Holub said. “I immediately knew I wanted to do that. But maybe the most formative experience when it comes to my transformation as a fighter was fighting with my older brother and his friends.”

Holub was completely hooked and began his own training, convincing his mom to drive him to the Academy of Martial Arts and Fitness in Robinson Township several nights a week to train. He continued to do so for the rest of his high school career, learning technique after technique from numerous coaches in several different martial arts and getting in tip-top physical shape.

Holub had the opportunity to compete in kickboxing and jiu-jitsu to sharpen his skills throughout high school. While most first-years were going to parties during O-Week, Ross was on the treadmill, cutting weight and driving to his MMA gym every night. The dedication paid off — the first Saturday after moving in to Pitt he competed in his very first MMA fight in the 145-pound featherweight class.

“When the bell rings, it’s beautiful chaos,” Holub said of fighting, mirroring a phrase coined by MMA fighter Cub Swanson. “Two fighters create art, at war with each other. The sport is brutal, but the technique is satisfying to me. There’s something innately pleasing about it.”

“When the bell rings, it’s beautiful chaos,” Holub said of fighting. “Two fighters create art, at war with each other. The sport is brutal, but the technique is satisfying to me. There’s something innately pleasing about it.”

And at the end of that war, Holub emerged victorious. His wrestling prowess allowed him to take his opponent down several times and pound him with punches from on top, maintaining control throughout the fight and winning all three rounds.

“I had been dreaming of actually being in a cage and getting my hand raised for so long, it was probably one of the best days of my life,” Holub said.

He did it in front of a group of friends and family, a dream that became reality after years and years of waiting.

“I was nervous for him, because of how important it was to him,” Sharon said. “It was so exciting and awesome seeing him win that fight.”

As is typical in fighting and boxing, Holub had a few months after his first fight to train for the next. And although he had tasted the sweetness of victory the first time he entered an official octagon, Holub was defeated in his second fight several months later.

At about this time, Holub realized he had a decision to make. He had chosen to live in one of Pitt’s Towers to make friends and be a part of a community, but his constant training was making that difficult. So he decided to step away from fighting.

“I would ask myself every day, ‘Do I really want to pursue greatness at something if it means sacrificing a lot of other things?’” he said. “The people in your life are the most important thing, and I came to that conclusion. I gradually decided to take a break from competition.”

The free time that came with stepping away from fights led to quite the twist in Holub’s life. On a family vacation to San Diego, the first time he ever saw improv, he volunteered to get on stage and perform.

He had wanted to try out improv comedy after seeing it a few times. With his world no longer revolving around MMA, Holub had the opportunity to try out this new hobby.

“I had always been the class clown type,” Holub said. “Around this time of shifting passions, I felt like I had gotten away from my funniness, so I started taking improv classes to rediscover it.”

“I had always been the class clown type,” Holub said. “Around this time of shifting passions, I felt like I had gotten away from my funniness, so I started taking improv classes to rediscover it.”

Besides enjoying improv as an “outlet for his silliness,” Holub also likes the communal feeling that comes with creating an improvised art piece as part of a group. He finds improv and MMA to be similar in that they encourage participants to think on their feet and feed off of what other people are doing.

“In fighting you are going to war against each other,” Holub said, “but in improv you are going to war together in a way. They’re also similar in that you practice certain techniques, but when the lights are on you and it’s show time, you adapt to your partner or opponent.”

Improv has since taken over as Holub’s main passion in life — he now performs in an improv group called The Crocodile’s Dilemma. His fellow members are aware of Holub’s talent, particularly his good friend Deric Brown. Brown, a 33-year-old comedian from Washington, D.C., saw Holub performing an improv show at Steel City Improv Theater once and immediately knew he was something special.

At that show, one of Holub’s improv teammates was extremely drunk in an attempt to calm his nerves. The teammate was performing horribly, but Holub didn’t let that get in the way of the troop’s scene.

“Holub did a really good job of incorporating his [fellow performer’s] drunkenness into the scene and making him funny,” Brown said. “I went backstage to congratulate him on a job well done.”

Holub and Brown quickly became friends and decided to form a new improv team with a few other individuals, and in 2017 The Crocodile’s Dilemma was born. The group performs a monthly show at Steel City Improv Theater in Shadyside. The group also has plans to travel to festivals in different cities such as Nashville, Tennessee. While The Crocodile’s Dilemma has some exciting plans in store for the future, Holub tends to focus on the present.

“I just like having fun with my friends and getting better at improv,” Holub said. “A bunch of different people with different backgrounds coming together for this main purpose. A bunch of goofy weirdos who have all agreed to pretend that things that aren’t there are, and that people that don’t exist do.”

Holub’s focus may be on the present, but he’s too passionate about improv to not think about how it will play into his future, as well as his passion for and studies in nonfiction writing.

“I would like to continue to get better at improv and writing,” Holub said. “Career-wise, I would love to combine the writing and the comedy. I would love to write on shows.”

Holub may think of himself as a writer first, but Brown was insistent on his friend’s acting ability.

“His ability to engulf a character really makes him stand out,” Brown said. “He’s a very good actor. It’s weird doing a scene with him, because you’re just staring at him and forget that you’re even in the scene.”

Sharon has supported her son every step of the unexpected path he has taken. And she will continue to do so, content to see her son realizing his dreams.

“I don’t care if he’s famous,” Sharon said. “But I could totally see him on something like ‘Saturday Night Live,’ where you have an opportunity to write and act. It would just be nice to see him be successful at something he loves doing.”

But he hasn’t left fighting behind completely. Although he has no plans to schedule another full-on fight in the near future, he scheduled his classes this semester around training three days a week. He said he’s thinking about a potential fight involving only kickboxing.

For now, Holub’s true focus lies with improv. Wherever it leads, he’s grateful for everything it has done for him and for encouraging him to “live a life worth commenting on.”

“I owe a tremendous amount of my personal growth to improv. This art gave me a group of close friends, a way to grow my comedic muscle and a potential career path,” Holub said. “Great improv is like magic to me, and I aspire to get to the level that inspired me to start improvising in the first place.”