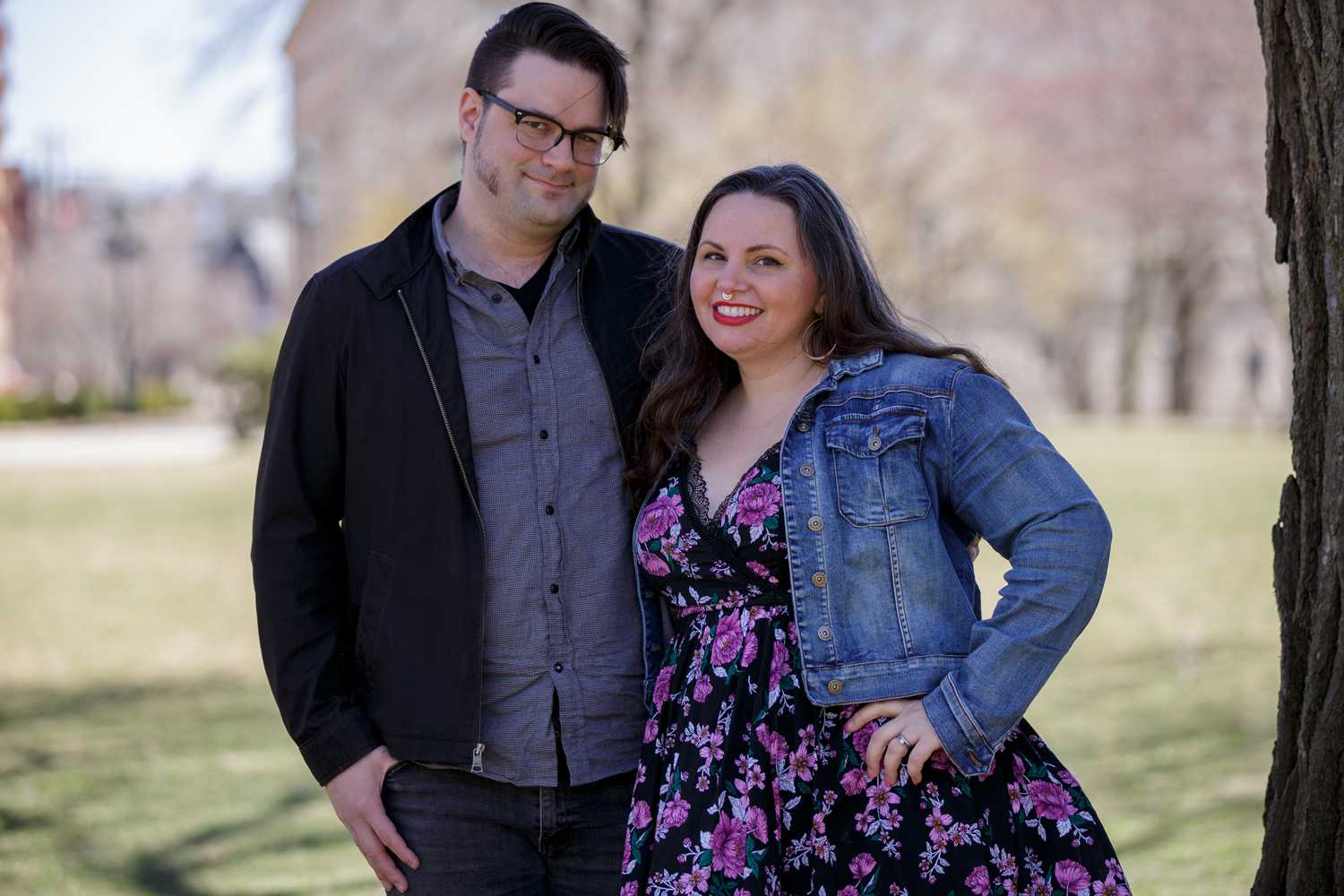 PJ and Jessie Patella-Rey met in June of 2014 during a time of great struggle for them both. Jessie was a single mother, and with her funding running out, had decided to explore sex work. Shortly after the couple met, PJ, then a graduate student, was diagnosed with testicular cancer.

The Patella-Reys are in a much more sound place currently, married and working as instructors in Pitt’s gender, sexuality and women’s studies department. They focus on discussing the impacts of sex work as well as the performance of gender and sexuality through digital technology. Outside of academia, Jessie is a co-founder and PJ an organizer for Pittsburgh's Sex Worker Outreach Project.

Soon after they began dating, the pair found that they provided the perfect balance for each other, both in activism and academia, as well as in their familial life. Around this time, Jessie began working as a sex-cam model before moving on to phone sex work, which she described as less like putting on a show and more like providing therapy.

“PJ and I got together and he was doing a lot of research on camming,” Jessie said. “So being around him and watching him go through all of his interviews made me curious about [the issues sex workers face].”

PJ is still working on his dissertation in sociology through a Ph.D. program at the University of Maryland. A native of Pittsburgh, PJ first attended Pitt Greensburg and then Duquesne, where he received his master’s in philosophy. But the long journey through graduate programs, with the added pressure of a new family and health issues, has kept him still working on his dissertation.

Jessie, who had studied philosophy at the University of San Diego and then received her master’s in theology at the graduate theological union at University of California at Berkeley, later moved to Pittsburgh with a former partner before joining a Ph.D. program in philosophy at Duquesne University. It was at Duquesne that Jessie became interested in feminist philosophy and began the Duquesne Women in Philosophy organization. But after facing gender discrimination and sexual harassment in academia and finding a great support community for LGBTQ and feminist activism, Jessie decided to explore sex work part-time while she continued to work at a fortune 250 company.

Sex work is a highly stigmatized and highly unregulated profession that leads to dangerous working conditions — globally, 45 to 75 percent of sex workers are likely to experience sexual violence at some point in their careers. This, and her time learning about second-wave feminist criticisms of sex work in her Ph.D. program, inspired Jessie to advocate for the regulation and decriminalization of sex work. In addition, the discrimination that she had faced led her to reconsider what feminism meant to her and how to advocate for herself and others.

“I need to find what I’m going to do and come up with another identity that wasn’t wrapped up in academia,” Jessie said. “[Working in the sex industry] was just so different because instead of just talking about things, it was talking to people who were having these really intense experiences.”

Jessie and PJ both share a passion for storytelling. Through PJ’s ongoing work on his dissertation, he’s found this aspect to be the most rewarding despite its challenges.

“It took a long time to get to know people and build a comfort level with folks and get to the point where I could recruit people and really sit down with them and have them be comfortable that I was going to represent them fairly and honestly in my dissertation,” PJ said.

The Patella-Reys admit that their line of work is not typically considered “proper” and faces issues that most people would rather not discuss. However, since the passing of FOSTA/SESTA — The Stop Enabling Sex Traffickers Act and Allow States and Victims to Fight Online Sex Trafficking Act — in April of 2018, the couple feels that sex work issues have moved to the forefront of many political issues heading into the 2020 elections.

In the midst of a growing awareness — as well as the fight for closely related issues like sexual assault and LGBTQ+ rights — the Patella-Reys have also felt that discussion about sex work advocacy must be made more accessible. This has led the couple to begin working on collaborative podcasts and lectures. Since Jessie’s return to academia, she has begun writing a weekly sex column in the Pittsburgh City Paper focusing on topics including sex work legislation, beauty standards, consent, fetishes and more.

One of the most popular products of the couple’s work together is “The Peepshow Podcast,” where the two discuss sex work and social justice.

“One of the interesting things about running the podcast is that that, in many ways, came out of the research I was doing,” PJ said. “It just didn’t seem fair to me that the people that I was interviewing probably wouldn’t have access to [my published research] or they’d have to pay for it. It just didn’t feel ethically right to me, so I decided to do a kind of separate project that was giving something back directly to that community.”

It is through projects like these that the Patella-Reys hope to reach wider audiences and continue their advocacy. Sometimes their work upsets people or makes them uncomfortable, but the couple knows that this is one way they will get their point across. Even their colleague, Frank Karioris — a visiting lecturer in the gender, sexuality and women’s studies department at Pitt — notices this effect.

“They’re pushing the right buttons, at the right time and in the right way so that they rile people up sometimes,” Karioris said.

“They’re pushing the right buttons, at the right time, and in the right way so that they rile people up sometimes,” Karioris said.

But the Patella-Reys aren’t just advocates. They also spend a great deal of time balancing a life with two children from Jessie’s previous marriage and a toddler.

“We joke a lot of the time that we are two people that share three or four jobs between us. Because we do in so many ways share in the work that we do and collaborate,” PJ said. “But also each of us has our own specific things.”

At the moment, they work opposite days so that one parent is always home with the kids. However, even professionally, the two balance each other.

Whether it is through their joint work or their personal life, the pair continuously works to support one another in their efforts. Even at department meetings, the Patella-Reys sometimes bring their toddler and work together to co-parent and continue their progress.

As the couple continues to advocate for sex workers and teach about pressing issues, they hope to continue expanding their outreach to the Pittsburgh community. Jessie wishes to expand on her writing as she looks to find her place in academia again. PJ hopes to finish his dissertation soon and continue teaching introduction to GSWS at Pitt and working on their podcast.

Ultimately, the Patella-Reys want their work to continue to share the stories of marginalized people and hopefully enact change.

“I think that policy makers need to hear those stories and until there’s some changes that make things safer and less stigmatized for people who are working in the sex industry, I’m probably going to keep writing and telling those stories and hope that people just listen,” PJ said.