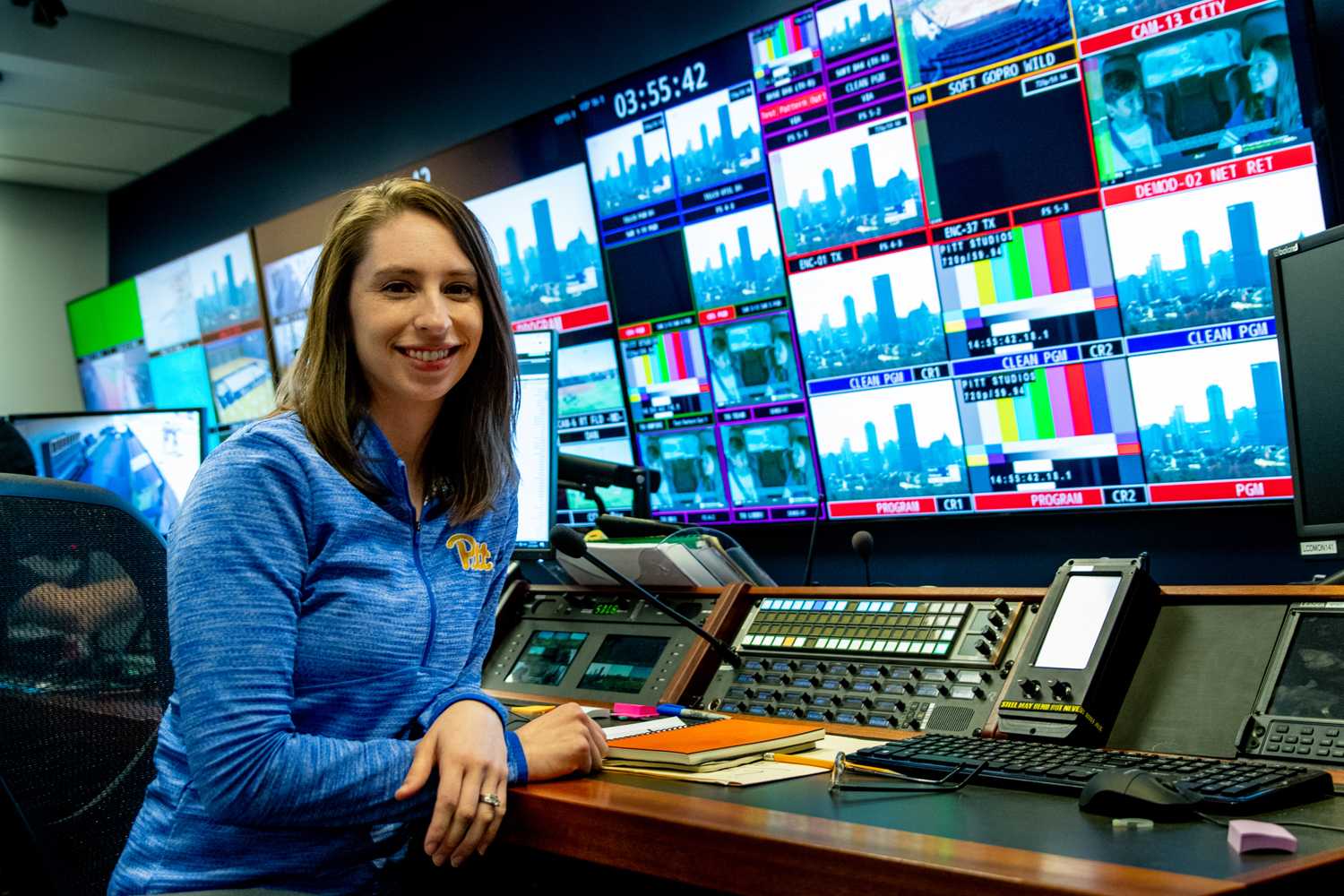 Kelly Hammonds: Leading the team behind the team

On a clear, crisp day in March, Kelly Hammonds sits with a dozen other crew members in broadcast room 1 of Pitt Studios in the Petersen Events Center, communicating with the student time-out coordinator on the field and a representative with ESPN via headset. She’s stationed at the intercom panel up front, gazing intently at more than a dozen monitors trained on the softball field. Players do exercises, stretch, thwack balls into their gloved hands. A game against Penn State is starting in about 15 minutes.

Hammonds maintains communication with several different people over her headset during the game, her thin, athletic wear-clad frame always leaning toward the monitors. Pitchers, catchers and batters are reflected in the glasses perched on her nose.

“We are encoder number one, you should see a shot of the city.”

“Next batter is a leftie.”

“TOC, leave the field when I count down.”

When Hammonds joined Pitt’s athletic department in 2010 at the age of 22, she thought she had a pretty clear idea of what her job was going to be like. Freshly graduated from Pitt with a degree in media and professional communications, she was to begin producing video content for Pitt sports’ websites and social media.

Then Pitt’s athletic department signed a deal with the local Comcast network to provide 500 hours of live sports broadcast each year. Hammonds’ job description changed in only a handful of months. Suddenly, she and her coworkers were scrambling to figure out how to broadcast live productions.

“My job went from what I was originally hired to do, which was creating content for scoreboards, media content online … to TV as well. I started learning about creating live TV on the job,” she said.

Hammonds, now 31, is currently the assistant athletic director of broadcast and video production. While her job still sometimes includes producing video content, most of it focuses on overseeing two dozen crew members in broadcasting about 120 annual athletic events across nine different sports for the ACC Network.

“Every year has been so different. I never imagined I would get to this place,” she said. “No year has ever been the same for me, having worked here for the past 10 years.”

Hammonds has spearheaded a lot of the recent activity in sports broadcast production at Pitt — beyond setting up and leading live productions, she’s helped create Pitt Studios, a series of recording studios and office in the Pete that began operations in October 2018. She’s also played a part in putting together a broadcast curriculum at Pitt.

Hammonds’ interest in sports and video production began when she was growing up in eastern Pennsylvania. She would watch football with her father, who briefly played for Penn State. Hammonds was fascinated by the action and stories being caught on camera.

“I always thought it would be interesting to work in sports, in production, but didn’t really know what that entailed,” she said.

“I always thought it would be interesting to work in sports, in production, but didn’t really know what that entailed,” she said.

When it came time to attend college, Hammonds decided to enroll at Pitt because she assumed it would afford her more opportunities for figuring out what she wanted to do. She knew her interests lay in sports and video, so she quickly joined the Panthers Sports Network, a club consolidated by UPTV that filmed short sports pieces.

She also interned in the athletic department during her time at Pitt, as well as with NFL Films and the Pittsburgh Steelers. Her college years led her to become even more enthralled with the complexity behind creating media for sports.

“It was during that time that I realized what went into the whole world of sports production, I had seen color analysts and play-by-play … But I had never really comprehended the entire world behind what we see on TV or hear on the radio,” she said. “I knew I wasn’t really interested in being in front of the camera, I wanted to be behind the scenes.”

Following graduation, Hammonds was able to get a full-time job working under Paul Barto, the then-associate athletic director of broadcast and video production, who had mentored her during her time interning in the athletic department.

Barto said the athletic department has been very lucky to have Hammonds around as a leader. In a workplace that can often be chaotic, her attention to detail and strong work ethic are only some of the traits that make her indispensable to the program.

“She’s always been somebody wise and mature beyond her years. I take no credit for her success, she’s a self-made person,” he said. “She’s got this great way of communicating and reaching out to people — they have a tendency to trust her and look up to her as a role model.”

When Pitt’s athletic department first began producing live broadcasts for Comcast between 2010 and 2013, Barto and Hammonds spent most of their time finding equipment and wiring facilities fit to produce live broadcasts. Pitt began broadcasting live on ESPN3 in 2013, which Hammonds describes as the point when the athletic department’s focus moved more onto covering sporting events live. The department also began introducing more students to the video production process as interns and volunteers.

Then Pitt transferred to the ACC network in 2016, and Hammonds and her coworkers partnered with the NEP group — a Pittsburgh-based production company that provides outsourced teleproduction services — to create Pitt Studios, which is responsible for more than 100 live sports broadcasts per year. Pitt Studios is a 6,000-square-foot facility in the Pete with three broadcast control rooms, multiple editing suites.

“It was two years of meetings about equipment lists, how big the offices would be, how high the monitors needed to be, for example if you were looking too high up your neck hurts,” Hammonds said. “It was very different from what I had done on a day-to-day basis up ’till that point, which was focusing on people in the control rooms and the productions themselves.”

“She’s always been somebody wise and mature beyond her years. I take no credit for her success, she’s a self-made person,” Barto said.

Nowadays, a typical work day for Hammonds lasts from 9 a.m. to 5 p.m., when she and her staff discuss crewing for events and finalize schedules. Maintaining harmony in the workplace is a big deal for Hammonds — Pitt Studios’ crews are mostly made up of students and freelancers. Who’s working can change a lot depending on the broadcast. While the variability can present challenges, it’s also one of the parts of the job Hammond likes the most.

“I’ve learned how to be a manager while actually managing. It’s something I’ve grown into,” she said. “We’re the team behind the team. If we’re not functioning well the broadcast isn’t going to be as good as we want it to be either.”

Hammonds has also played a significant role in creating more opportunities for students in broadcasting at Pitt through her work in the athletic department. During the two years it took to create Pitt Studios, she and her coworkers collaborated with the Film and Media Studies department to craft a broadcast curriculum, something she didn’t have while attending Pitt. She advised the faculty involved on what beginners in the field ought to learn first.

Students were able to enroll in the first-ever Broadcast Journalism class this semester. The students sometimes use Pitt Studios as a place to practice their skills — something that’s helped Hammonds kindle more interest in athletic broadcasting specifically.

Throughout the softball broadcast, a former student athlete sits at Hammonds’ elbow at the panels, watching her work — she’s interested in becoming a color commentator. Prior to the game, the two discussed the strategy behind the job while watching commentators prep on the monitors in front of them.

“The best thing to do is not necessarily come up with a script in your head,” Hammonds tells her. “Come up with talking points.”

Hammonds loves working with students on broadcast productions. She can recall a few broadcasts where she’s looked around the room and saw the average age was 22.

“And they’re putting on broadcasts that are, in my opinion, in competition with professional-level broadcasts,” she said. “Getting to see how [students] progress over a series of months or years, seeing where they start and where they end up is the most exciting part of my job.”

“Quite frankly, she’s a teacher,” Barto said. “She’s good at communicating with young people and young professionals, helping them to do better … she teaches them in a way that's firm but gentle.”

Kevin Wheeler, a Pitt grad who worked as an intern under Hammonds before coming to work full-time under her in 2013, credits her with helping him become familiar with the athletic department’s structure and how the world of live production works.

“She’s been a role model for me, professionally and personally,” he said. “Her honesty, her ability to let things that don’t matter too much roll off of her shoulders and her prioritization of what needs to get done is second to none. She’s a valuable asset to the department, a very important part of what goes on on a day to day basis.”

While Hammonds puts dozens of hours a week into sports production through her job, it still works its way into her off hours. The Pitt fan will watch away games both for pleasure and because she wants to see how other schools capture the Pitt teams in action.

“You learn from watching other people work,” she said.

This eye for video and broadcast production extends to all sports games she watches, including ones with family.

“I’ll say to my husband, ‘Did you see that mistake?’ and he says nope,” she said. “What’s nice to realize is that all of the things that you see go wrong that you wish went differently, most of the time the audience doesn’t realize the mistake.”

Her life isn’t 24/7 sports production, though — most of the free time she gets right now she spends with her 7-month-old son, Benjamin.

“I wake up in the morning and he is there and he needs me,” she said. “Whenever I do have a minute I’m not working, spending time with him is the most rewarding thing for me.”

Hammonds said it’s been an adjustment, handling a kid alongside all the work she does with the athletic department — but she doesn’t see herself leaving the position anytime soon. She enjoys her job and the people she works with too much.

“I’m lucky to work with people everyday who have my back, I definitely see myself staying in this position in the future,” she said. “I’m not sure every person working in a fast-paced environment could say that after having a kid.”