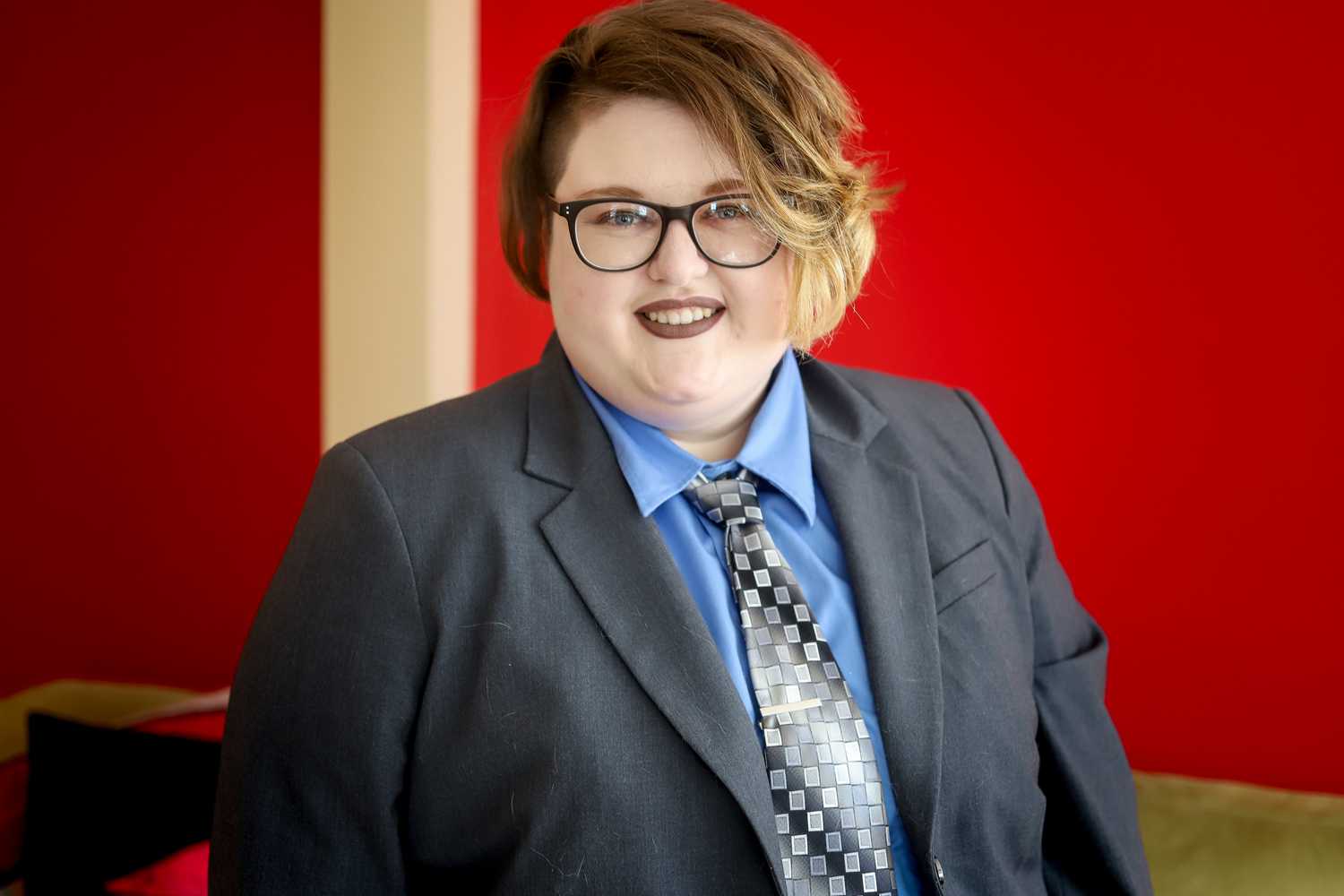 On any given afternoon on the fourth floor of the Cathedral of Learning, tucked between various English department offices, you’ll find Madi Scull studying at one of the heavy wood tables in the elevator lobby. When not working, studying or volunteering, Scull is a homebody who shares their home with their four cats. Scull, a senior triple major in communication rhetoric, sociology, and gender, sexuality and women’s studies, is bashful when it comes to their academic rigor.

“It’s been an adventure. I usually make the joke that I did it because I hate myself, but that’s not true,” they said. “I just really love school.”

In addition to being a triple major and teaching assistant for a section of GSWS 0550, Scull also recently submitted their final work for Pitt’s Bachelor of Philosophy program. Through the BPhil program, students choose an adviser and write a thesis that they defend in front of a committee, similar to graduate students earning master’s degrees. Only a handful of schools in the United States offer this degree, which generally takes about two years to complete, and students at Pitt are required to maintain a 3.5 GPA to remain in the program. Scull’s thesis topic — an examination of health care disparities between transgender and cisgender people — hits close to home.

“It’s not that hard to figure out that there are huge health disparities between the trans community and the general population,” Scull said. “I knew that they were there but I had no idea how bad they were. It can be a very sobering project, but I think it’s very, very important.”

“It’s not that hard to figure out that there are huge health disparities between the trans community and the general population,” Scull said. “I knew that they were there but I had no idea how bad they were. It can be a very sobering project, but I think it’s very, very important.”

Scull identifies as non-binary, queer and trans, and they work to carve out spaces for marginalized identities wherever they can — even if conversations get uncomfortable for them.

In Scull’s experience, non-binary identities, which fall under a trans umbrella term, can often cause confusion for people outside of the LGBTQ+ community. Scull has had multiple discussions with professors about accommodating trans students to make sure students in the community feel safe in the classroom.

“I’ve just been trying to really have these discussions and break these things down and just put myself in the uncomfortable position when I feel like I have the ability to,” Scull said. “And hopefully, we’re going to make some change at some point.”

Scull, who is equally passionate about animals and education, has a big, warm smile and cheerful laugh. They are a strong force for activism in their community, advocating for the trans population in the classroom and serving as diversity and inclusion chair for the gender-inclusive service sorority Gamma Sigma Sigma.

When serving as diversity and inclusion chair, Scull has become the go-to person for questions their sisters might have about making sure their spaces are inclusive of the trans community.

“I’ve become almost like a point person. When somebody sees something or if they hear someone say something that they’re just like, ‘Oh, I’m not sure what to say about that but I feel like that would make Madi uncomfortable, let’s go talk to them about it and figure it out,’” Scull said. “So I’ve been able to have a lot of really constructive conversations with my sisters.”

Scull’s efforts do not go unnoticed. Their little, junior Lauren Frank, sees how their work as GSS’ diversity and inclusion chair makes sure every member feels welcome.

“I think that they are always looking to make a place for everyone who needs to feel welcome and loved,” Frank said.

“I’ve just been trying to really have these discussions and break these things down and just put myself in the uncomfortable position when I feel like I have the ability to,” Scull said. “And hopefully, we’re going to make some change at some point.”

Gamma Sigma Sigma has partnered nationally with organizations like The Red Cross, Mothers Against Drunk Driving and The American Cancer Society, and each chapter is encouraged to take on at least one project a semester to support one of the national partners. That hasn’t stopped members of Pitt’s chapter of GSS, like Scull, from creating their own projects.

Scull, who is the communications intern for local no-kill animal shelter Animal Friends, realized their sisters wanted to help, but had a hard time knowing what to do because few sisters had the access to cars needed to physically volunteer at Animal Friends. So they worked with their supervisors and came up with a way for the sisters of GSS to help.

Members of GSS now make puppy blankets for the animals at Animal Friends. According to Scull, making these blankets, which are small rugs made out of old T-shirts that act as toys to help stimulate and engage shelter animals, was a way to bridge the gap between an organization that needed help and the limits of going to school in the city.

Before Scull's project, GSS did not have any animal-focused service projects. Frank said the puppy blanket project benefited the sisters just as much as it did Animal Friends.

“It provided an opportunity for our sisters to come together and do something bigger for the Pittsburgh area, like Animal Friends,” Frank said.

Scull describes themself as a huge animal lover, and was looking for way to be near animals from the start of their time at Pitt. When they came across Animal Friends, it was a perfect match. Animal Friends isn’t just a no-kill shelter — the organization also provides low-cost vet care to those in need, and offers programs like partnerships with local food banks and Meals on Wheels to give free pet food to people who need it.

“We really approach everything from a non-judgmental place. When we go into underprivileged neighborhoods, we’re not sending them out there to go judge them,” Scull said. “Something that someone might have been putting off because of cost reasons might be accessible to them but they didn’t know about this program.”

“They have the coolest personality of anybody that I’ve ever met because they’re one of those people that immediately cares,” she said. “And I think that that has had the greatest impact in the work that they’ve done — whether the Pitt community, whether via animal friends, with their classwork, with friends on a personal level — they go the extra mile in everything they do.”

The spay and neuter programs at Animal Friends have helped to reduce local feral cat and stray dog populations, leading to less euthanized animals, which Scull describes as the heart of what Animal Friends does.

In their position as communications intern for Animal Friends, Scull is able to combine their passion for animals and inclusive attitude with their degree in communication rhetoric. They are responsible for a weekly look at the Animal Friend’s Facebook messages, as well as writing website bios for the adoptable animals.

“We get a lot of messages and we have a lot of people in Pittsburgh who need help. It’s just something where I’m able to direct them to where they need to go,” they said. “That’s a really special experience.”

Working with animals is right at home for Scull, who grew up with multiple Bernese mountain dogs, and has four cats of their own right here at Pitt. Tuxedo, a black and white cat with long eyebrows, and Ed, a green-eyed, chunky tabby cat, came with Scull to Pitt back at the start of their sophomore year in 2016.

The two are Scull’s constant companions, demanding attention as Scull sits at their small kitchen table trying to work. Ed, in particular, wants all the love he can get and frequently licks Scull and their friends’ hands, much to the delight of guests.

The other two cats, tabby siblings Rory and Emerson, came to Scull last November. Scull’s family found them as feral kittens living in their backyard and, after rescuing the kittens from lurking neighborhood hawks, Scull committed to socializing and raising the two.

“So, now I have four!” Scull said with a laugh. “Sometimes, cats choose you.”