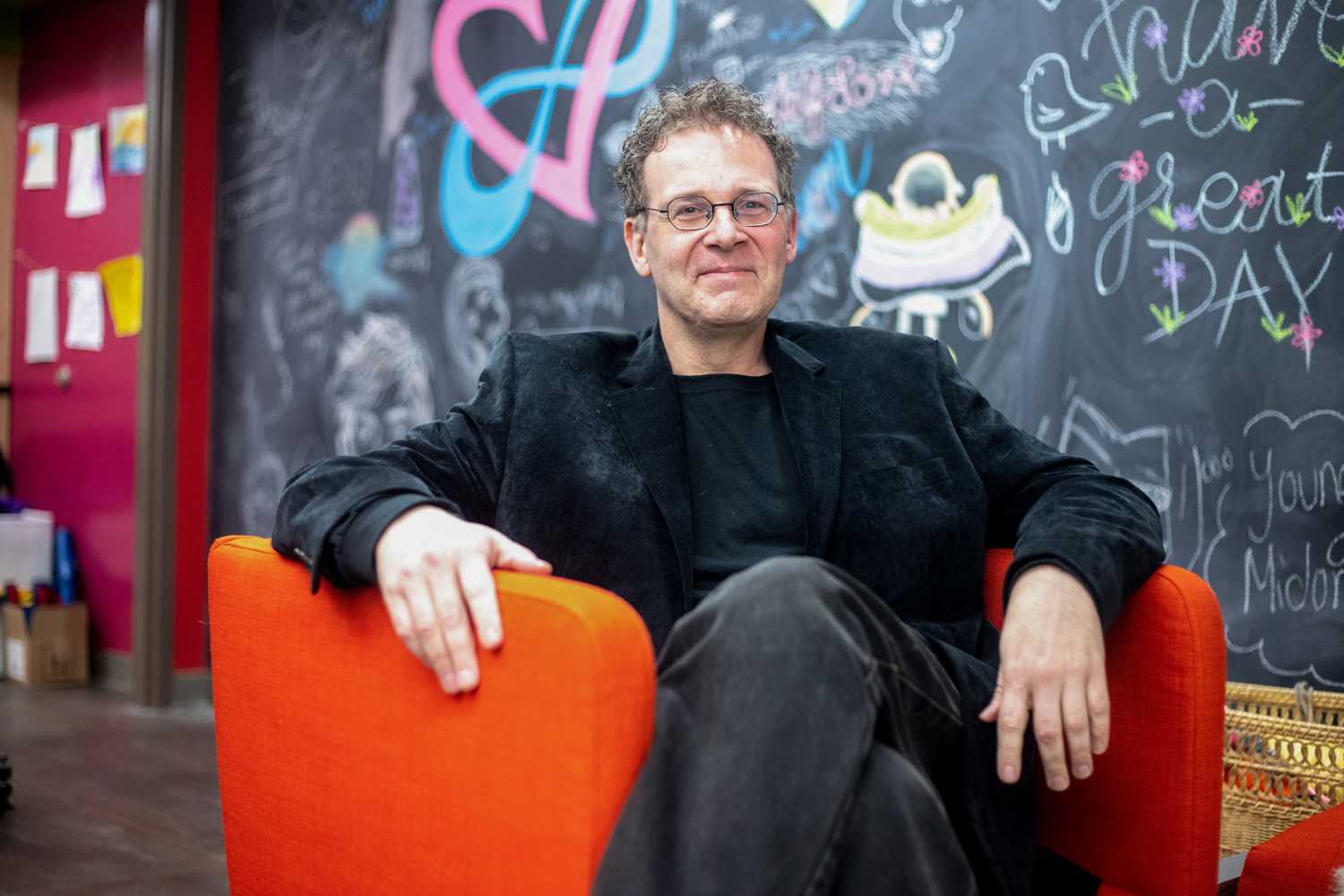 Erik Schuckers’ creative outlets have always been diverse — art, music and writing all feature in the types of expression he’s immersed himself in.

But for most of his life, his outlet always seemed to be blocked by work.

“My work life and my creative life were very separate from one another, and it often felt like a competition. Spending more time dedicated to one left me depleted regarding the other,” he said. “I think that's a really familiar conundrum for any working artist.”

Schuckers had worked in the Carnegie Museums’ education and visitor services department for 14 years by 2016, struggling to feed his artistic side. Then, he heard that Pitt was looking for a manager for the newly established Center for Creativity.

Excited at the thought of bringing his career and artistic lives together, he quickly applied for the position of manager of the Center and was soon hired.

For two years now, Schuckers, a tall, lean 48-year-old with black glasses perched atop his nose, has been overseeing the Center’s space in the basement of the University Store on Fifth. Acting as workshop manager, he and his team also plan events and programs at the Center where students can explore their creative sides.

He can often be found in his small office behind the check-in desk completing administrative tasks on his computer. His makeshift office walls are composed of whiteboards, with important notes and reminders about meetings, new workshop ideas, the Center’s newsletter and more scrawled in black marker.

But Schuckers particularly enjoys checking in on students as they work, weaving around the work tables stacked with collage materials or the typewriters, musical instruments and other creative devices lying around the brightly lit room.

“It’s fun to be able to be able to just get up and walk and go do something,” Schuckers said. “It’s really easy to get tied up with administrative stuff, but you gotta keep doing things and getting creative at the same time.”

He may check to see that materials are properly stocked, or begin making his own little works of art.

“The other thing I try to do is to spend part of the day doing something,” he said. “It might only be 20 minutes, but to get up and go out and type or teach myself Twine, or try to make a block print — just getting out and keeping up with making things so I don’t lose touch with that.”

Whether he takes out only a few minutes or half an hour, Schuckers likes to utilize the numerous supplies in the Center, with his favorite being the typewriter section, which features beautiful antique typewriters, both manual and electronic. The published poet and nonfiction author loves operating them because they cause him to think more deliberately about what he’s writing.

Schuckers tries to convey the idea that writing is an art form to as many people as possible. He often hears people say they aren’t creative enough to participate in workshops, which he believes is outright false because of preconceived notions of what creativity is. He calls himself a “proud amateur,” because even though he has been published, every time he sits down to start a new project, he feels like he’s starting from scratch.

“I find it really rewarding to lead workshops on things like erasure and ‘collage’ poetry, or writing from memory or writing based on art,” he said. “These are all really excellent ways of defusing that fear of the blank page that often stymies people who want to write. In these forms, we're often starting with some raw materials that already exist, so the anxiety level is lower, and people are more able to engage without fear or self-consciousness.”

Kit Ayars, the director of strategy and partnership at the Center for Creativity, first met Schuckers when he applied to be the manager of the Center in 2016 after leaving his job at Carnegie Museums. She explained that Schuckers was picked for the position because he was a creative person with a large amount of experience in management and institutions.

“Erik’s very warm. His values in terms of inclusivity are in line with ours. So that, too, is part of his warmth and his personality — whoever you are he’s willing to meet you where you are and like you as you are,” said Ayars.

Schuckers enjoyed all kinds of creative endeavors as an outlet for self-expression from a young age, including making music, writing and making up stories. As he grew older, his passion for creativity never left, resulting in him working on developing his skills through various forms of creative outlets — even trying out dance in college. His creativity and job skills led him to nonprofit work, so when he was presented with the opportunity to work at Pitt’s Center for Creativity, he couldn’t pass it up.

“I sensed that this was a way to bring together the two strands of my experience: my work in nonprofits and desire to spread what I believed in to as many people as possible, and my creative practice and exploration,” he said.

Schuckers loves seeing the various creations of students at the Center for Creativity — from poems typed out on a typewriter, to block prints, to interesting sewn creations — and he hopes to be able to extend his love for creativity and art to a larger audience in the future.

“I feel so privileged to work at the Center for Creativity — I only wish that we could somehow manage to reach every single student, staff and faculty member on campus with our message of creativity, playfulness and innovation,” he said.

Jenn Zheng, a P1 student at Pitt’s School of Pharmacy, is a student worker who works alongside Erik at the Center for Creativity. She said she always notices how inviting he is with new visitors and students.

“He’s usually very interactive [with students and visitors]. Whenever a student comes in, if they need help, he’s always open and willing to help and he’s always very interactive,” Zheng said. “He’s nice, very accommodating and very informative — he always has an answer for everything if you ever need any help.”

Schuckers hopes to help the Center for Creativity open more work spaces around the University in the coming years, including a space in the newly remodeled Hillman Library. There, students could learn about bookmaking, letter-pressing and other hands-on literary activities. That would just be the first branch off of the Center for Creativity — Schuckers said he and his staff hope to have many more of them, including a performance space for dance and music.

He said the idea behind these spaces is that there won’t be just one building representing the Center for Creativity, but a whole network all over campus that encourages creativity. He is constantly wondering what he can do or add to better the experience of users visiting the workshop, and he works to try and accommodate everyone.

“I most love connecting with members of the Pitt community who are uncertain or hesitant about their creative abilities,” he said. “The single most rewarding thing for me is to have people who walk into the workshop thinking that they're not creative and walk out understanding that they absolutely are.”