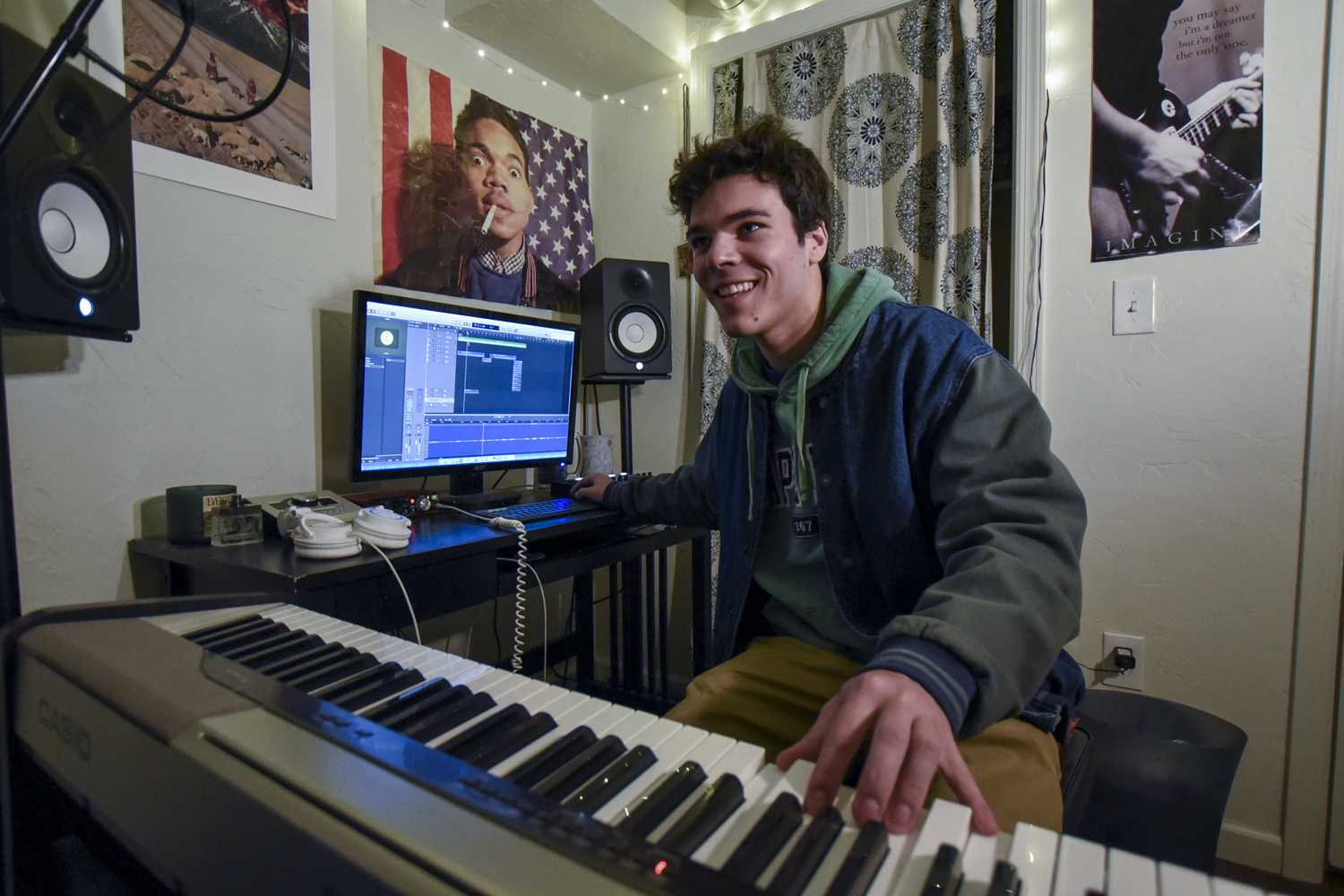 James “Pick Patek” Pickering: From the studio to Spotify

Nestled in the small bedroom of his South Oakland apartment, James Pickering can usually be found every day recording music to send out to his 20,800 monthly listeners on Spotify.

Pickering, a sophomore computer science major, is known to these thousands of followers as Pick Patek, a budding hip-hop artist who stands tall and confident in his music videos, with locks of wavy dark hair contrasted by striking blue eyes. His song repertoire includes hits like “Blue October,” “Skywards” and “Off White,” which all have more than 250,000 plays on Spotify and are featured on his album “When in Oakland.”

The music of this album is a smooth blend of rap and hip-hop, reminiscent to the styles of Chance the Rapper, Mac Miller and the early stylings of Kanye West. Pickering’s songs — all written by him — follow his experiences and hopes, from relationships to friends to shenanigans on the streets of South Oakland, hence the album’s name.

Although “When in Oakland” is Pickering’s first album available to listeners, the 20-year-old has pursued music since his elementary school days in his hometown of Abington. Raised on the sounds of classic rock like Led Zeppelin and Rush, Pickering was introduced to the world of rap and hip-hop by a friend from school.

“I remember in fifth grade, my friend got an iPod and he downloaded some Drake and Lil Wayne, and we would sit in the back of the bus every day and listen to rap all the way to school and all the way home,” Pickering said. “Once I discovered that this genre existed, I was like, ‘Wow, this is cool, I could do this.’ And then I just did it. That was my logic. I made three or four CDs between fifth and sixth grade.”

“Once I discovered that this genre existed, I was like, ‘Wow, this is cool, I could do this.’ And then I just did it. That was my logic. I made three or four CDs between fifth and sixth grade.”

Pickering chuckled upon mentioning his early music ventures, describing those CDs from fifth and sixth grade as hilarious to go back and listen to. Since those days, Pickering has not stopped honing his craft, making music all through middle and high school. Despite starting his career early, he didn’t adopt the pseudonym of Pick Patek until the very end of his high school career.

“My original [rapper] name was just Pick, which was short for my last name, and I was part of this collective in high school with another artist and two producers. We were called Huff,” he said. “About halfway through senior year, we thought that we should start [breaking away] from this since we’re all going to be going to different colleges and we wouldn’t be able to work together anymore.”

For Pickering, this meant approaching music as a solo artist, and he found the best way for the group to re-brand themselves as individual artists was through social media. This is how Pickering fashioned himself as Pick Patek instead of just Pick.

“When I went to make an Instagram for myself [as an] artist, ‘Pick,’ that’s just a word, that’s not going to be an Instagram handle,” he said. “So I had to come up with something that sounded cool as a handle, so I just did Patek, which is a watch. It was really random at the time, I thought it looked cool. I didn’t even transition to calling myself Pick Patek until other people started calling me Pick Patek because of my Instagram.”

Although he is known as Pick Patek when he hits the stages for live performances at places like North Oakland’s popular house venue The Bushnel and South Side’s clothing store and music hall hybrid Illegal Apparel, Pickering is simply known as James to those who see him in everyday life. When he isn’t rapping and singing, Pickering is a brother of the Alpha Tau Omega fraternity, a member of the Pitt club rock climbing team and an intern at software developing company Bentley Systems.

One of his roommates and fraternity brothers, Connor Taljan, a sophomore studying accounting and marketing, knows him as the kid glued to his bedroom studio.

“As of late, he’s been spending a lot of time up there just making songs, almost a song a day for the past couple of weeks,” Taljan said. “He will work for a while, and then when he feels ready for them to be listened to, he will have us [come] in and listen to four or five songs.”

“As of late, he’s been spending a lot of time up there just making songs, almost a song a day for the past couple of weeks,” Taljan said.

It isn’t just the final products of Pick Patek songs that Taljan gets to hear before fans. He also overhears Pickering’s songwriting process on the daily. The moments where he hears a shell of a song are a bit comical to Taljan, as they sound out of place, but they always form something great by the end of Pickering’s music-making session.

“All the time, we’ll hear either his vocals without the beat or the beat without the vocals, and it’ll be pretty funny,” Taljan said. “It all comes together in the end and sounds good, though.”

This songwriting process is a constant in Pickering’s life. He said most days he will come home between classes just to work on music, and then work on beats through the night when he isn’t doing schoolwork. Pickering writes his own lyrics and does some of his own production with help from his computer, piano and occasionally guitar. However, he does have the privilege of working with a production team.

Pickering often works in a professional studio in North Versailles — a town near Monroeville — with production team The Drop0uts, led by local producers Aaron Karsh and Ryan Tedder.

“We first met Pick on Instagram,” Tedder, an East End resident, said. “He reached out to us and wanted to work with us, and he was talented and we had him come into the studio. This was about a year ago, and we’ve been working with him since.”

Tedder — not to be confused with the famed producer and singer of the pop band OneRepublic — is also Pickering’s manager, who has helped spearhead his ascendance in the Pittsburgh music scene. Helping artists gain popularity is no new task for Tedder. Acknowledging the high number of streams on Pick Patek songs, Tedder said other artists of his have reached even higher numbers, and he sees that in Pickering’s future as well.

“I worked with one artist, Jaira Burns. I helped her get on Interscope [Records] and her stuff has millions of listens on Spotify,” Tedder said. “I think one of her songs is at 11 or 12 million now. She’s has some great success and Pick is doing great, too.”

Tedder’s success with Jaira Burns — who is originally from Vandergrift, now living in Los Angeles — was one reason Pickering was excited to work with Tedder. Pickering said this partnership has helped him make more connections in the music world and develop as an artist. During his busiest times, Pickering makes it out to The Drop0uts studio anywhere from one to three days a week, in addition to pursuing other passions on campus.

Music is a big part of Pickering’s life, but it is not the only thing he’s dedicated to — he’s still a Pitt student. Taljan said that his roommate’s work ethic is what sets him aside from all of the other aspiring rap artists on the scene right now, even the ones doing it full-time.

“I think a lot of times, there is a disconnect between musicians and listeners. Listeners just expect musicians to put out music because that’s their job,” Taljan said. “But James is still a full-time student, and the fact that he is making as much music as he is at the quality that it is is extremely impressive.”