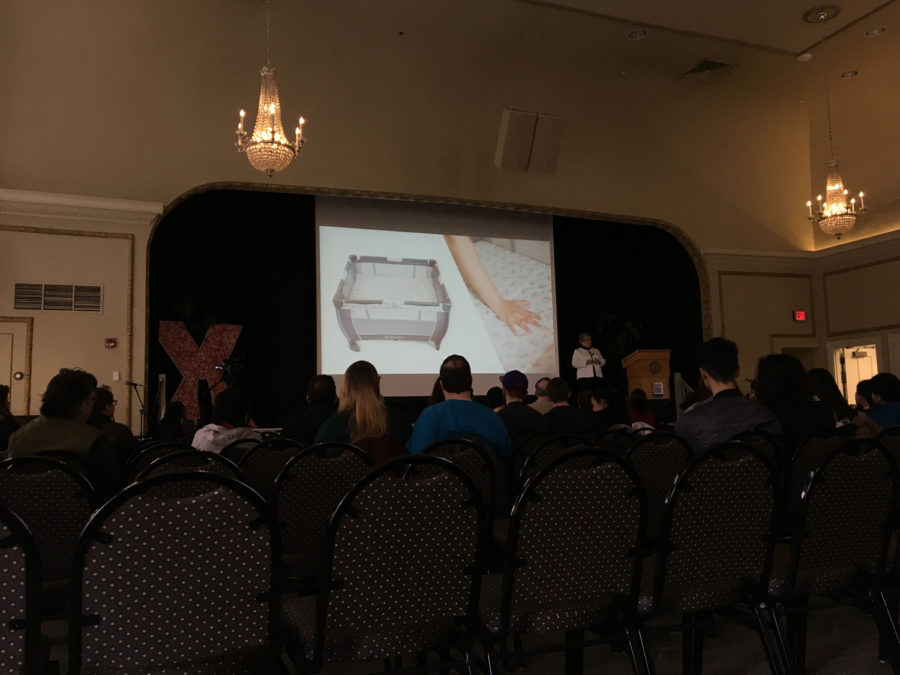 Judy Bannon, executive director of Cribs for Kids, Inc., describes the cribs she provides to parents through her nonprofit.

This article is a continuation of coverage of the TEDxPitt talks. Read the first part online at https://pittnews.com/article/146634/news/tedxpitt-2019-part-1/.

After a pizza lunch and musical performance from a cappella group C-Flat Run, attendees of the TEDxPitt event gathered again to listen to four more speakers discuss their internal ignition.

Yannier is originally from Turkey, and was passionate about teaching during her time in a university setting there. She coached a robotics team, and said they did well at national competitions. But when they hit hardship, she turned the moment into a lesson about persistence.

“I began to explain to them that it’s not always about the end result, it’s about what you learn and experience along the way,” she said.

She kept this persistence after completing her undergraduate degree, and in May 2017, Yannier founded NoRILLA, an educational system that mixes digital and physical, in-person teaching to provide fundamental education to young children. She said this system has shown significant promise, and that she will continue improving it based on scientific literature about teaching.

“Learning can be fun, but it’s not enough to just make learning fun,” Yannier said. “In order to make learning effective, we need to provide the necessary guidance and support for our children, utilizing proven learning methods and techniques.”

Sporting a yarmulke, Edelman, who holds a degree in mechanical engineering from MIT, gave a talk about how he has adjusted his views on fear. As a skeleton athlete, he encounters fear frequently — the sport requires one to slide down a track under five Gs of force at more than 90 miles per hour. But he said he’s embraced this fear and uses it to his advantage.

“Fear is a funny thing. It’s not static, it’s dynamic, it changes every time,” Edelman said. “I used to fear fear, but now I relish it, I run towards it.”

Using his engineering know-how, Edelman changed the way he approached the sport with physical modifications to his equipment. He made minor alterations to his sled and his helmet and significantly changed the way he sat on the sled. Through thousands of hours of training, Edelman became the first Israeli to qualify for a sledding sport at the Winter Olympics, competing in the 2018 Games in PyeongChang.

But some of his modifications were deemed illegal only 16 hours before the skeleton finals, and so he had to change his helmet to a standard-issue one. Without the helmet he practiced with, he knew he wouldn’t do as well, and was terrified of disappointing the country he was representing. But he said he turned this terror on its head, and saw his achievements so far — he was the first Israeli to qualify for a sledding final — as victory enough. He was elated to come in 28th in the skeleton finals.

“When fear is present, potential exists. When failure is fear, it is only because it can be overcome,” Edelman said.

“Imagine how hard it would be to get rid of that stigma, to move forward from the identity of being a criminal, to feel like a full citizen, to feel invested and included in American democracy,” Shineman.

To test how the act of voting affected one’s investment in the democratic process, Shineman paid people to vote in California, one of two states where paying someone to vote is legal. Shineman found that voters who were paid had significantly higher turnout — 85% compared to 43%. Not only that, she said, but voters who were paid were more engaged with the process and further researched the candidates and issues.

She found the same results when she informed people who didn’t know they could vote that they indeed could. In Virginia, former Gov. Terry McAuliffe individually restored voting rights to more than 150,000 felons, but many were not notified of this restoration of rights. Shineman gathered some who didn’t know and informed them of their right to vote.

“Their reactions were extraordinary. When people found out that their right to vote had been restored, their whole face would light up,” Shineman said. “They’d say things like, ‘Wait, you mean I can vote? Can I put that on my resumé? I can’t wait to tell my family. I feel like a citizen again.’”

Maroon was remarkably successful in his academic and medical career. He was the chief of neurosurgery at UPMC Presbyterian, a consultant for the Steelers and pioneered important medical techniques for neurosurgery.

Then, within a week, his father died of a heart attack and his wife moved with his two children to another city. This sudden change in his life caused him to burn out — he quit neurosurgery and moved in with his mother in West Virginia, working at a truck stop his father used to own.

“One day I was doing brain surgery, the next I’m flipping hamburgers and literally filling up 18-wheelers,” Maroons aid.

This experience fueled Maroon’s talk about burning out. He said he needed to find a better work-life balance, as the sudden change in his personal life caused his focus on work to become destabilized. He began running, and eventually worked his way up to competing in an Ironman Triathlon in Hawaii. This gave him another outlet for his stress, and since then, he’s returned to neurosurgery, working as a professor and surgeon.

Overall, he offered three pieces of advice to the audience: ensure your physical and mental health are secure, your relationships are stable and you’re living your life to the fullest.