Pitt Stages preps for ‘Into the Woods’ opening night 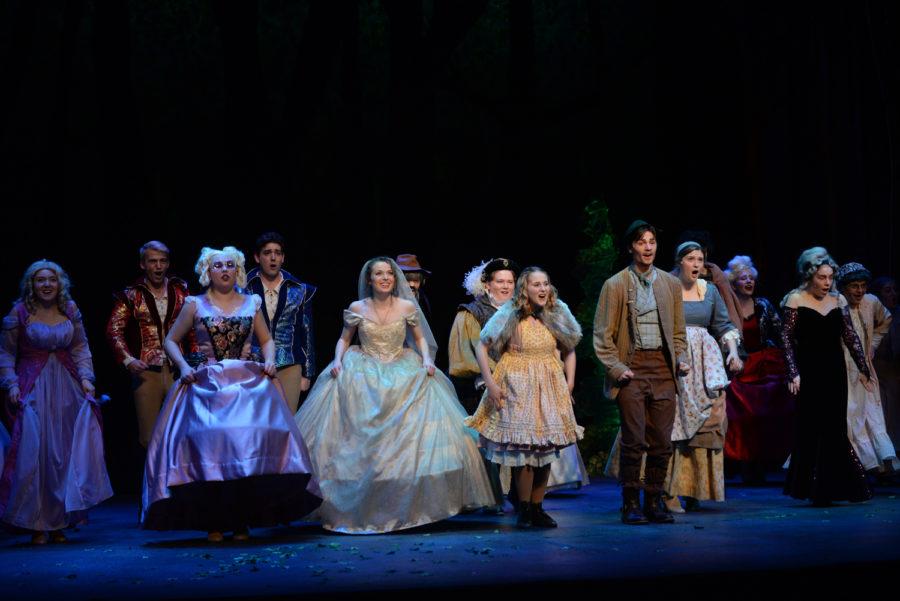 The Pitt Stages cast rehearses on Wednesday evening. Pitt Stages will present “Into the Woods” from today until April 14.

As most Pitt students begin their preparations for finals, the students of Pitt Stages are getting into costume and character at the Charity Randall Theatre. As they rush to dress rehearsal as classic fairy-tale characters such as Little Red Riding Hood, Cinderella and Rapunzel, they go over their lines, preparing for opening night of the mainstage production of “Into the Woods.”

The musical, written by James Lapine with music and lyrics by Stephen Sondheim, intertwines the plots of several Brothers Grimm and Charles Perrault fairy tales. Since its debut in 1986, “Into the Woods” has become a Broadway hit as well as a feature film, released by Disney in 2014. The Pitt theatre arts department will perform “Into the Woods” opening tonight at 8 p.m., running through April 14.

Niffer Clark, the musical’s director who is visiting for the semester from Milwaukee, said she was excited to bring the magic of the show to the stages at Pitt.

“It takes the archetypes of fairy tales, and Sondheim and James Lapine present all these archetypal fairytale characters like Snow White and Red Riding Hood,” Clark said. “It really is the journey of that fairy-tale feeling.”

Clark believes this show brings something different to the traditional fairy-tale story through the changes the traditional characters undergo. She stressed the importance of having wants and wishes, but also understanding that others will be affected in different ways as the characters pursue their wishes.

“It’s like a ‘me’ story, where everything is about what I want, living happily ever after, so things are really black-and-white, simple,” she said.“They go from the ‘me’ to a sense of independence, which you don’t see really when you look back at fairy tales.”

Usually, the second act of the musical portrays the woods as a dark and dreary place meant to highlight the consequences of the characters’ actions in the first act. But in this version, there is still an air of acceptance for the repercussions of the choices that were made.

One such character who learns the independence described by Clark is the character of the Mysterious Man, played by sophomore theatre arts major Pedar Garred. His character is one of the few in the story with experience in the woods and passes wise knowledge onto another character, the Baker.

The Mysterious Man has learned to accept the choices he has made and that shows in songs he performs, like “No One Is Alone” in the second act. Garred shared some of that understanding.

“Something unique that we’re doing with [‘Into the Woods’] is using a general guide because the woods in the show are trees, but the woods in life are just like the hard times,” Garred said.

The show is a favorite among fairy-tale fans, not only for its high number of staple fairy-tale characters, but also for its lavish costumes and intricate design pieces. The dress that the actress playing Cinderella will wear took a team of five people a month and a half to complete.

Katrina Dagenais, a senior English literature major, and Dorothy Sherman, a senior theatre arts major, served as main costume-shop workers for this production. The pair spent at least 50 hours mapping, stitching and making the necessary adjustments. Dagenais said she and her counterpart started working on the Cinderella dress for six hours each week, and the process lasted much longer than expected. Sherman agreed.

“I think people don’t really understand the time that goes into building [costumes and sets] and how long it takes to actually make something,” Sherman said.

Stage crew, costume designers and actors alike experienced weeks of hard work, as rehearsals began back in February. For Garred, the long hours in the theater — six days each week from 6 p.m. to 10 p.m. — helped him find his way as an actor and get excited for the performances to come.

“As a whole, I think [this show is] something that tries to prepare people for the hard times in their life and to understand that those will pass and that you’re going to come out better because of it,” he said. “I have a theory that the show was written for the people who work on it and it helps them learn way more than it helps the audience learn.”

Once performances begin, it is the responsibility of the stage manager to make sure everything goes as planned. Taking on this task for the show is senior theatre arts major Shane Smay, who will arrange the props, stage direction and general management of the performance from curtain call to final bows. Smay shared his excitement to see his hard work pay off come opening night.

“The audience can look forward to the complex and sophisticated music and lyrics of Stephen Sondheim in a sometimes dark, sometimes uplifting, always engaging take on traditional fairy tales,” Smay said in an email. “I’m so excited for people to come see this show! Our cast and crew are so ready for an audience, and I can’t wait to share our production with the world.”