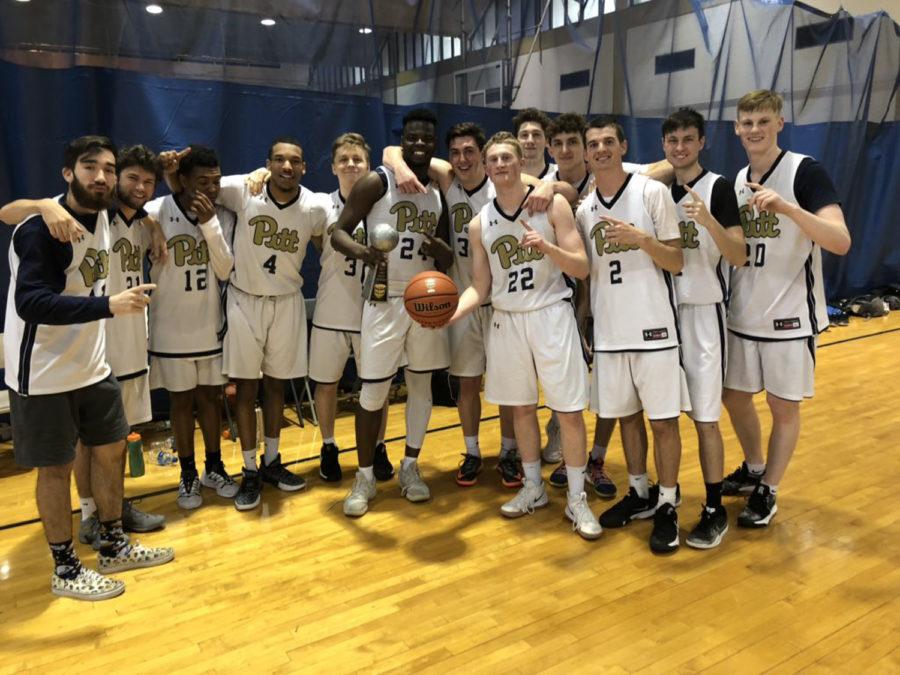 Luke Kindberg was there in South Bend, Indiana, two years ago, playing with Pitt’s club men’s basketball team for the National Club Basketball Championship Tournament. He and his team squandered a 15-point lead with 10 minutes left and lost in devastating fashion to the team from Purdue University.

Now just one of three players left from that squad, his focus is getting the currently undefeated Panthers another shot at what they missed out on last time.

“That’s the goal right now,” Kindberg, a senior finance major, said. “Get back to the national championship.”

Kindberg’s squad wrapped up its unblemished regular season with a three-game sweep of neighboring Robert Morris on March 23, securing their spot as host of the Great Lakes Regional Finals.

The Panthers stayed hot through the regional tournament, emerging unscathed from two matchups from the west side of the region. On their home floor of Trees Hall, the Panthers beat No. 4 Michigan 83-78 in the opening round before dispatching No. 1 Central Michigan 80-72 in the regional final Saturday.

With that win, the Panthers have booked their ticket to South Bend for the 2019 National Club Basketball Championship Tournament. The tournament is held at Indiana University South Bend from April 12 through April 14. Pitt will play as the tournament’s top seed, opening against the No. 8 Georgetown Hoyas.

The NCBBA has held the tournament in each year of its existence, with the first in 2014 at La Roche University outside of Pittsburgh. Virginia Tech was the inaugural champion following its defeat of Spring Hill College, per the NCBBA’s website.

Throughout this season, Pitt competed in the Great Lakes East Region against club teams from West Virginia, Robert Morris, Kent State and Carnegie Mellon, among others.

“When I came here, I was just playing up at Trees [Hall], just picked up a ball and I met a few guys and they convinced me to join last year,” Lampe said. “We weren’t terrible, but we had a very underwhelming season.”

That tournament run two years ago was led by strong performances from Anthony Starzynski and Joe Mascaro, both of whom later earned walk-on spots with Pitt’s varsity team. Mascaro, a senior marketing and finance dual major, started the final game of his senior year this season against Notre Dame, while Starzynski, a junior finance major, has made seven appearances off the bench under coach Jeff Capel.

Kindberg fondly recalls the special impact both those players had on the team, but he sees how things have changed for the better for this year’s team.

“This year, I think if we get the opportunity, we’re more well-rounded. I think we have more guys that can initiate offense and defensively we’re more intense. But overall, having four or five guys who can consistently go up and get a basket instead of two is going to be a big difference,” Kingberg said.

Lampe agreed, also noting the team’s defensive focus has helped it throughout its terrific run this season.

“If you look at a lot of our scores, they look a lot lower than they would have last year,” Lampe said.

Lampe attributed the improvement to a different team mentality — one that shifted more of a focus to the defensive side of the ball and emphasized constant movement.

“Everyone was eager to compete this year, and we knew we could,” he said.

Pitt’s play hasn’t just been recognized by its opponents and in the record books. For the second time in the last three weeks, the Panthers were voted the number-one club team in the nation by the NCBBA, edging out the team from the University of Massachusetts Lowell and last week’s No. 1 Towson.

During the final weeks of the regular season, the team was fairly attentive to the weekly rankings. After all, the four highest-ranked teams from each region would have the opportunity to host the regional playoffs, and Pitt had put itself into a fantastic position for that.

But to Kindberg, Lampe and the rest of the team, rankings and recognition don’t matter anymore. Now, it’s tournament time and that means winning or going home.

And after leaving their last trip to the national tournament empty-handed, they now have a clearer idea of how to make the return trip more worthwhile.

“We’ve been talking about a national championship since tryouts,” Lampe said. “We know what we have to do.”

The Panthers’ quest back to the national championship game begins on April 12. Tip-off versus Georgetown is scheduled for 7 p.m.