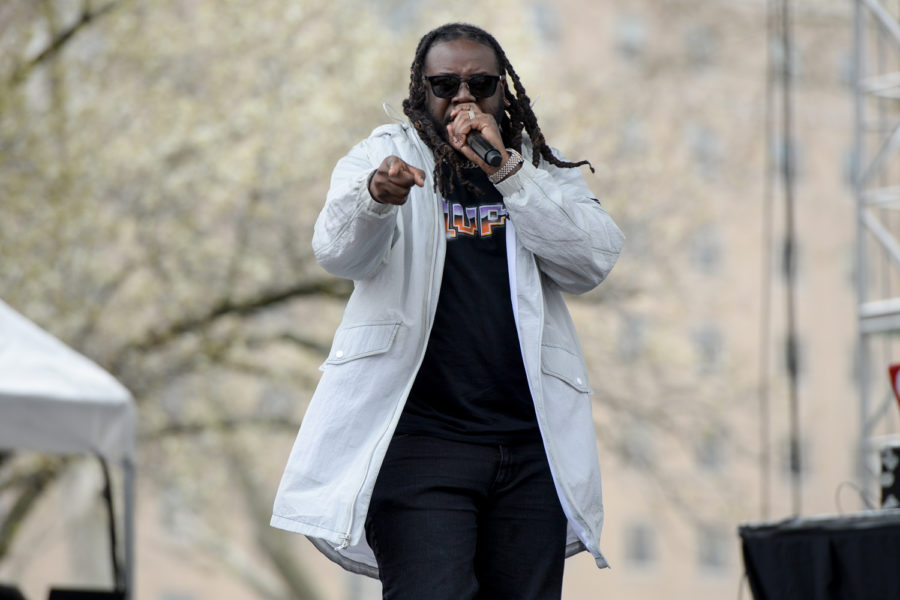 By Lauren Rude, For The Pitt News

After an afternoon filled with performances, T-Pain stepped on stage wearing a white overcoat to close off the day at the fifth annual Bigelow Bash music and food festival.

Spectators filled Bigelow Boulevard from the steps of the Cathedral to the lawn of the Union for the 2019 Bigelow Bash. They waited through performances from local bands, regional rappers and varsity Pitt athletes displaying flashy new uniforms until the headliner, T-Pain, took the stage at about 4:30 p.m.

Andie Walsh, a first-year education major, said she arrived early in order to avoid lines at the food trucks.

“It’s a good time before finals,” Walsh said. “There’s still two weeks left, so there’s still enough time to study but take the day to have fun listening to music and eating food.”

The first performance of the day was from South Oakland band go home, Eddie, which won this year’s Battle of the Bands to earn its spot on stage. The bash was a much different venue than their usual South Oakland basements. Bass player Alyssa Davidson, drummer Jesse Erb and guitarist and lead vocalist Chris Engle took the stage and played their set including two of their more well-known songs, “Jar of Quarters” and “See You Tomorrow.”

“It was definitely different and a lot of fun,” Engle said. “We got to see everyone listening for once versus being in a dark dingy basement.”

The band has had bigger performances for Pitt Tonight and CMU’s radio station, but for Davidson nothing would be as memorable as Bigelow Bash.

“You can’t get bigger than T-Pain,” Davidson said.

Ehennuhsen, a 2015 Pitt alumnus, performed his setlist after go home, Eddie. He featured some of his well-known songs including “Life’s Good,” “Samurai Jack,” and his most recent song release, “Sing About Me.”

Following the performances from Battle of the Bands winners go home, Eddie and Ehennuhsen, Tennessee-based rapper Cities Aviv began his set. The crowd grew and migrated toward two individuals using Cities Aviv’s music to participate in a dance battle.

After the musical performances, Pitt Athletics turned the stage into a runway. Two athletes from each of Pitt’s varsity teams revealed their new uniforms and retro colors as part of the school’s latest Nike collaboration.

Shortly after the food trucks departed at 4:30 p.m., T-Pain took the stage. By that point, the crowd had grown to fill Bigelow Boulevard and the lawns of the Cathedral and the William Pitt Union.

Two-time Grammy award winner T-Pain began his performance with some of his more well-known songs, including “Booty Wurk,” “Buy U a Drank” and “Up Down.” Following these songs, T-Pain interrupted his set-list to address the audience.

“What’s up with you assholes?” T-Pain said. “Welcome to the show.”

T-Pain took the time to interact with the audience before he continued with his setlist including “5 O’Clock” and “I’m N Luv (Wit A Sripper).” Throughout his set, T-Pain led the audience in call and response to some of his more popular songs.

Danielle Moss, the newly appointed travel director for Pitt Program Council and member of the Food Truck subcommittee for Bigelow Bash, said it was very rewarding to see the event come together after the council’s work.

“It’s very exciting, we all put a lot of our work into it. It is really nice because it is not just directors or advisers that get to do it. All of the committee members are all in on it, too,” Moss said. “It is all of our hands putting it together and we really would not be able to do this without our committee members.”