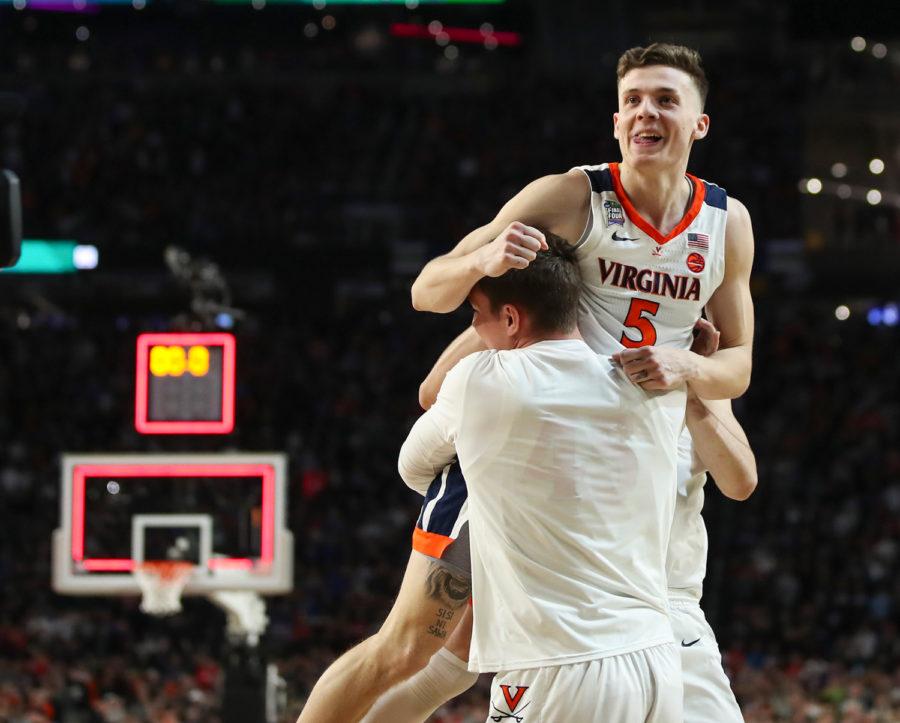 Virginia's Kyle Guy (5) is lifted off the floor by teammates after he sunk three free throws to win the game for Virginia against Auburn in a semifinal of the NCAA Tournament Final Four on Saturday, April 6, at U.S. Bank Stadium in Minneapolis. Virginia advanced, 63-62.

The age-old sports adage that defense wins championships certainly held true on Saturday night when No. 3 Texas Tech and No. 1 Virginia — two of the best defensive teams in the nation — each won their NCAA Men’s Division I Basketball Tournament Final Four matchups in Minneapolis to advance to the National Championship.

Both games were filled with excitement, suspense and disbelief that kept eyes glued to the screen. Let’s recap the games from Saturday night and preview the National Championship game that tips off on Monday night.

The first Final Four matchup of the night saw the No. 5 Auburn Tigers take on the No. 1 Virginia Cavaliers. The favored Cavaliers ended up winning a back-and-forth game 63-62, but the victory was embroiled in controversy.

Trailing by two points, Virginia guard Kyle Guy heaved up a 3-point attempt with 0.6 seconds left. The shot rimmed out, but the referee called a shooting foul on Auburn junior guard Samir Doughty. This gave Guy a chance to give his team the lead with three made free throws.

Guy, an 82.5 percent free throw shooter, was unphased by the intensity of the situation and sank all three free throws to put Virginia up by one. A desperation heave for Auburn was no good, so Virginia is now advancing to its first ever National Championship.

You have to feel for Auburn fans. Losing a game in those circumstances is devastating, especially when your school was also on the verge of its first National Championship appearance.

The foul call on Guy has received mixed emotions from the NCAA universe, with many saying it was a foul and many saying it wasn’t. Some are arguing that the ref should “swallow his whistle” in that situation. But most people — including notable Auburn alumni and fan Charles Barkley — agreed that the correct call was made on the floor. Doughty hindered Guy’s shot enough to warrant the foul and send him to the line.

Auburn was up 31-28 at halftime, and it’s hard to believe that this game would come down to the wire in the last five minutes. With 5:24 left, Virginia junior guard Ty Jerome drained a 3-pointer to put the Cavaliers up by 10 points.

Auburn then went on a 14-0 run over the next 5:07 to take a 61-57 lead with 17 seconds to go. Auburn senior guard Bryce Brown led the offensive onslaught, knocking down three 3-pointers over that stretch. This valiant comeback amounted to nothing though, as Virginia’s Guy took over with his late-game heroics.

No. 3 Texas Tech versus No. 2 Michigan State immediately followed and, despite the larger deficit, was almost just as entertaining of a game. The Red Raiders won 61-51 and will be playing for their first National Championship in school history.

As expected, this game was a low-scoring affair. Texas Tech entered with the most efficient defense in college basketball according to kenpom.com, and it certainly showed. The Red Raiders led 23-21 at halftime and held star Michigan State guard Cassius Winston to just nine points in the first half. Winston ended the game with 16 points while shooting 25% from the field — well below the 46% he shot throughout the season.

Other than an early five-point lead for the Spartans at the start of the game, Texas Tech was in control for the majority of the contest. The Spartans lost their final lead with 10:18 remaining in the first half.

Texas Tech held a highly efficient Michigan State offense to 31.9% from the field and 29.2% from beyond the arc. The Red Raiders also forced 11 turnovers and had four blocks, three of them coming from senior forward Tariq Owens.

Surprisingly, Texas Tech senior guard Matt Mooney was the best player on the floor throughout the game. With 13:51 left in the second half, he sparked an 11-2 run in which he scored eight points to give his team a 45-33 lead. Mooney would go on to lead all scorers in the game with 22 points while shooting 50% from both the field and from deep.

But just as in the other Final Four game, the Spartans ended up coming back and found themselves only down by one with 2:55 remaining. That’s when Texas Tech sophomore guard and presumed NBA lottery pick Jarrett Culver stepped in to engineer a 9-0 run to close out the game. He scored seven of those nine points, including a 3-point dagger with 1:01 remaining to put his team up seven.

The stage is now set for the National Championship on Monday night, with Texas Tech facing off against Virginia. Not many people would have predicted these two teams to face each other in the National Championship at the beginning of the season, considering Virginia lost to a 16-seed in the tournament last year and Texas Tech was picked to finish seventh in their own conference in the preseason media poll.

This game is destined to be an elite defensive battle. Both teams are known for their defensive prowess and rank in the top five for defensive efficiency. Both teams also hold their opponents to under 60 points per game. If you’re a fan of high scoring games and seeing shots fall from anywhere on the court, then this game probably isn’t for you.

Monday night’s game will be determined by the guards, not the forwards or big men. Both teams have capable players at every position, but the star power from both teams’ guards is more important. It’ll be a matchup between the dynamic duos of Guy and Jerome against Culver and Mooney.

What’s certain is that the game will be close and engaging for the entire 40 minutes. Yes, it will be extremely low-scoring — but that shouldn’t stop fans from enjoying two of the best college basketball teams display the immense talent that got them there.